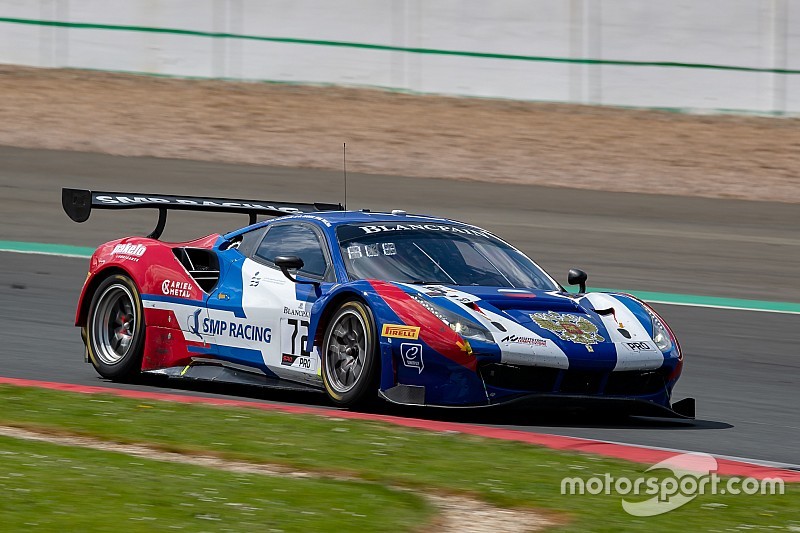 The Russian entrant's Ferrari 488 GT3 shared by Mikhail Aleshin, Miguel Molina and Davide Rigon came from 10th on the grid to score a 2.6-second victory over the best of the FFF Racing Team Lamborghinis driven by Franck Perera, Phil Keen and Giovanni Venturini.

Rigon moved into the lead with a neat move up the inside of Venturini in the Lamborghini Huracan GT3 Evo at the Luffield right-hander with 15 minutes left on the clock to notch up Ferrari's first victory since 2013.

The Ferrari gained during the first pitstop cycle when Aleshin handed over to Molina under full course yellow virtual safety car conditions.

Molina emerged from the pit sequence in second position behind Keen in the FFF Lambo, another to gain by stopping under the yellows, before losing out Andrea Caldarelli in another of the Italian team's Huracans.

The SMP entry then moved back to second when the #563 FFF car Caldarelli shared with Denis Lind and Marco Mapelli lost time in the second stops.

Rigon latched onto the tail of Venturini with half an hour to go before making the successful pass.

Jack Hawksworth was battling to hold onto third position in the Strakka Mercedes-AMG GT3 he shared with Lewis Williamson and Dev Gore when he was nudged into a spin at Club Corner by Mapelli.

Mapelli sustained damage in the incident and was overtaken by Vanthoor, Mathieu Jaminet in the best of the Rowe Racing Porsche 911 GT3-Rs and then by Hawksworth as he limped home to take sixth.

The Porsche, which Jaminet shared with Romain Dumas and Sven Muller, and the Strakka Merc came through from the back of the grid after the first of the drivers in the two cars failed to set a time in the three-part qualifying session.

The early laps were led by the pole-winning Grasser Lamborghini. Mirko Bortolotti was holding a narrow lead over Lind when he sustained a left rear puncture as he braked for Copse Corner after 22 laps.

Honours in the silver cup class went to the Grasser Lambo shared by Lucas Mauron, Arno Santamato and Gerhard Tweraser.