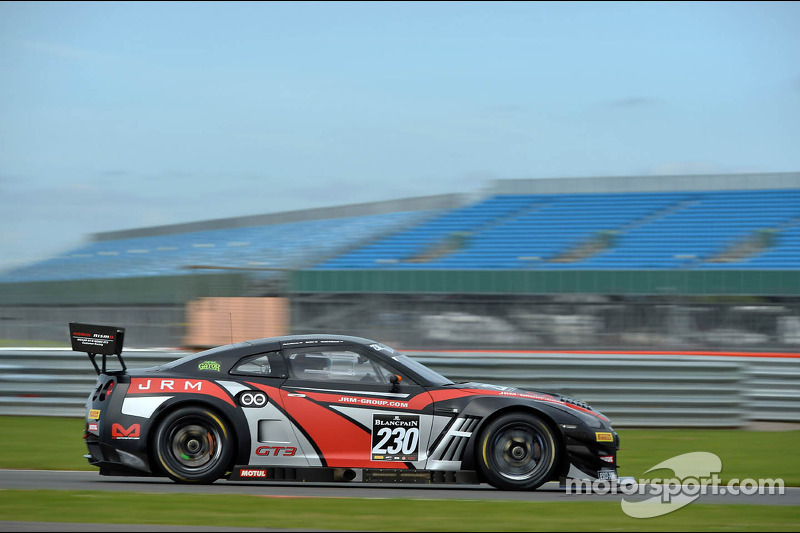 JRM Racing’s Nissan GT-R Nismo GT3 delivered on its promise in today’s Blancpain Endurance Series at Silverstone, with the #23 Pro Car entry of Steven Kane, Peter Dumbreck and Lucas Luhr claiming a fighting fourth position on track and third of the points-eligible runners. The result capped a strong weekend for the team following its fastest time in practice yesterday and top five qualifying position. 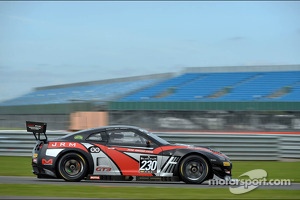 Reinforcing the improved performance of the Nissan GT-R Nismo GT3 this weekend, the #230 Pro Am entry of Matt Bell, Charles Bateman and Humaid Al-Masaood raced to fifth in the Pro Am class, and fourth in the points-eligible runners behind class winner #35 and fellow Nissan GT-R Nismo GT3 runner, Nissan GT Academy Team RJN.

Team principal James Rumsey commented, ‘That was an awesome race throughout. Third in class is more of an indication of the car’s potential at this stage and with a couple more test days under our belt I am sure we could improve on it – this is only the second race for the car in Blancpain. With the Aston not eligible for points, we are in a very strong position in the championship now. I’d also like to congratulate the Nissan GT Academy boys for a superb win in the Pro Am category – it shows that the car is capable of running at the front in both categories.’

The #23 featured in the racing action throughout the three hours. After starting Peter raced nose to tail with the #70, #1 and two of the Audi Club Team WRT cars. After an hour of close-fought racing, Peter handed over to Lucas Luhr.

‘I really enjoyed that,’ Peter commented after his stint. ‘I kept position at the start and then there were four cars that were really close so I had to attack and defend at once. I had a close fight with the #1 of Ortelli and he got past me at one point with a bit of an aggressive move, but I got past cleanly again quite soon after. I thought we could make up some more positions when the tyres of the guys in front dropped off, but our tyre peak only lasted three laps longer so I didn’t get the chance. But the car worked really well and we are in a much more positive position relative to Monza.’

Lucas Luhr kept the consistency throughout his hour, maintaining sixth until he handed over to Steven for the final stint. The northern Irishman closed the gap to the #4 BMW but came under heavy pressure from the #7 Hexis McLaren behind. The three circulated within three seconds of each other until the #4 pulled away slightly to close the gap on the #44 Kessel Ferrari in fourth. Dramatically, with just two corners remaining, the BMW and the Ferrari touched, allowing Steven to squeeze through at the very final turn and claim fourth.

‘It was so close at the end and I could see the two in front were really going for it,’ said Steven. ‘Then they touched going into Brooklands and I saw the chance to get past so I took it! It was great to be in a position to do that – it was a massive step forward from Monza and much more where we should be. Throughout the weekend the car has just got better and better and the result is much more representative of its potential.’

Lucas added, ‘If you see where we came from last race, all the guys did a great job to improve the car and we are definitely in the right direction so I look forward to Ricard. If we can do another step forward like we did from Monza to here I think we are in pretty good shape. It’s a tough field but I think it’s enjoyable fighting with 60+ cars on the grid. We are definitely on the right path and I look forward to the next round.’

The Pro Am car of #230 started strongly, with Charles up to third in class, however some issues with the tyres dropped him down the order. ‘The first part of the stint was really mega as I got past a few cars and was running third in class with some great lap times – at one point we were the seventh quickest car on track, even though we were back down the field,’ said the Boston-based driver. ‘But then the tyres really started to go off and the pressures increased hugely, which made the car quite difficult to drive. I dropped down quite a bit then and it was really just about trying to keep position until we could stop.’

Humaid was next up in the car, his first racing laps on the new Silverstone configuration. ‘It really felt like we had moved on since Monza and the car felt very good. There was a lot of traffic out there on my stint so I tried to concentrate on my own performance and not make any mistakes. There were a couple of times I went wide but generally I was pretty happy with how it went. With a couple more test days I’ll be even happier. However it was a great weekend overall – we confirmed the potential in the car with some strong lap times in practice and fought with the Audis and McLarens in the race.’

It was then Matt’s turn in the #230 with just over an hour remaining. He steadily moved up the order to finish in fifth in class, taking the #50 AF Corse Ferrari for position with 20mins remaining. ‘Fifth was OK but I think we can do better. We started P18 overall, which meant we got caught in the traffic. That had a knock on effect to be honest – in clean air Charles was doing some great lap times at the start, but at the end we were caught up in the train and it meant that the tyre pressure increased, the brakes got hot and the car performance dropped away a bit. We do know that the speed is in the car to qualify higher – if I had done all my best sectors in the same lap we would have been further up the grid and would not have encountered the issues we had. The potential is there for a podium and the GT Academy boys got the win so that’s something to build on for next time out. ‘

The next round of the 2013 Blancpain Endurance Series will take place at the Paul Ricard circuit in the south of France on 29 and 30 June.