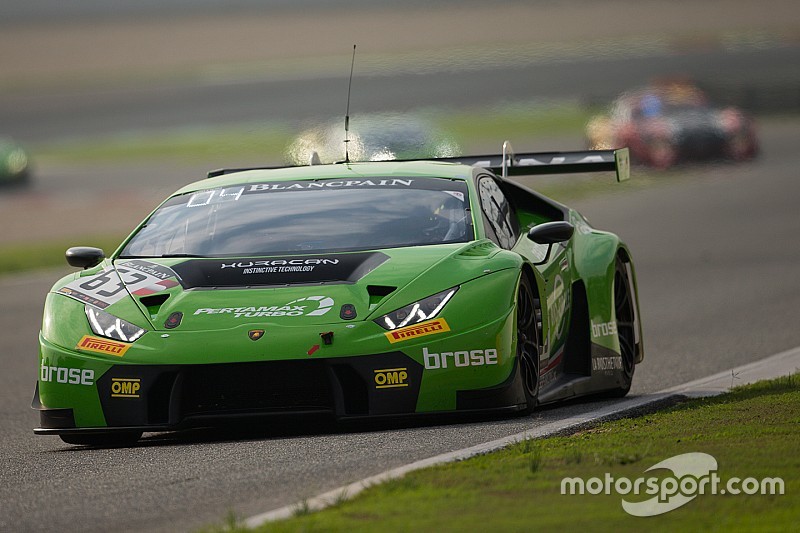 A distant third position aboard their Grasser Lamborghini Huracan GT3 gave them the crown after the retirement of the championship-leading M-Sport Bentley shared by Vincent Abril, Andy Soucek and Maxime Soulet shortly after half-distance.

The result was also more than enough to secure Bortolotti and Engelhart the overall Blancpain GT Series crown, which combines Endurance Cup results with those scored in the sister Sprint Cup.

Vautier survived pressure from the WRT Audi R8 LMS of pole winner Robin Frijns during the final stint to take the win by just seven tenths of a second after three hours of racing.

Grasser's hopes of taking the drivers' titles took a dive in the opening stint as the #63 Lamborghini tumbled down the order after starting from the front row.

Engelhart had fallen to ninth before the first round of pitstops began.

A couple of places were gained in the pits and then Caldarelli was able to move up from seventh to third in the space of four laps.

With Soucek in the Bentley Continental GT3, which had qualified only 28th, fighting over 10th position, the championship appeared to be heading to Italy.

When the Bentley retired with just over one hour and 20 minutes to go, the Grasser Lamborghini crew only needed to finish in the top six to claim the title.

Caldarelli said: "It was a really good stint – and I really enjoyed it. I think we deserved it, the team, Lamborghini and all three of us."

The winning Mercedes took the lead after Juncadella, who had run third for much of the opening stint, was left out on track as long as possible.

The ASP team was able to leapfrog the #5 WRT Audi in which Marcel Fassler had led the majority of the first hour and the best of the HTP Mercedes cars started by Franck Perera.

Serralles then eked out a narrow lead over Jake Dennis, who had brought the #17 WRT Audi R8 LMS up to second after taking over from Stuart Leonard.

Frijns emerged from the pits right on Vautier's tail, but the Frenchman proved equal to his challenge before edging away.

He came under pressure again after encountering traffic on as the end of the race approached.

The Mercedes shared by Perera, Jimmy Eriksson and Maximilian Buhk took fourth on the final lap of the race.

Buhk was able to move past Adam Christodolou's Black Falcon Mercedes, shared with Luca Stolz and Yelmer Buurman, after shadowing him over the final laps.