The #7 M-Sport Bentley of Guy Smith, Andy Meyrick and Steven Kane won the second round of the 2014 Blancpain Endurance Series, after an exciting end of the three hour race.

Twenty minutes before the end, Steven Kane managed to pass leader Andy Soucek in the #99 ART Grand Prix McLaren. Third place went to the #1 Belgian Audi Club Team WRT, with Laurens Vanthoor taking the podium position in the final lap. The win in the Pro-Am category went to the #80 Nissan GT Academy Team RJN Nissan while Gentlemen Trophy honours went to the #458 GT Corse by Rinaldi Ferrari, despite having to serve two drive-through penalties.

Sunny conditions greeted the 43 cars on the starting grid for the second race of the 2014 Blancpain Endurance Series. In the morning Franck Perera had put the #93 Pro GT by Almeras Porsche on pole position, but his teammate in the Pro-Am machine, Frenchman Eric Dermont, who took the start, was quickly demoted by the professionals of the Pro Cup.

Alvaro Parente took the lead in the #98 ART Grand Prix McLaren, and for the first thirty minutes of his stint, it looked like the team would repeat their strategy of the Monza race: create a big lead during the opening stint and maintain the gap during the rest of the race.

But Parente was unable to hold on to his lead. First, Guy Smith in the #7 M-Sport Bentley closed the gap, and after the Briton was penalised with a drive-through for improving under yellows, Parente’s team-mate Kevin Estre in the #99 ART Grand Prix McLaren was able to remain within striking distance of the leader. After the first driver change Kevin Korjus did not need much time to pass Grégoire Demoustier, to put the #99 McLaren in the lead. Meanwhile Andy Meyrick had taken over from Smith on the #7 Bentley Continental and he too was able to overtake Demoustier. 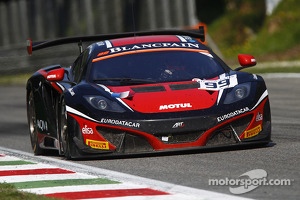 The deciding phase of the race started 42 minutes from the end, when the #128 Horse Power Racing Aston Martin crashed heavily. A safety car intervention was unavoidable, which helped Steven Kane, now at the wheel of the #7 M-Sport Bentley, to close the gap towards leader Andy Soucek, who was driving the final stint on the #99 McLaren. Although Soucek took advantage of the backmarkers between himself and Kane to open up a seven second lead, Kane quickly reeled the McLaren in once he had a clear track in front of him. Twenty minutes from the end the Bentley Continental took the lead and held on to that position to take a very popular win in front of the home crowd in Silverstone.

The fight for third was decided in the final lap, when Laurens Vanthoor in the #1 Belgian Audi Club Team WRT managed to find a gap to overtake the #26 Sainteloc Racing Audi of Grégory Guilvert. In Pro-Am, Joe Osborne in the #38 MP Motorsport AMR Aston Martin dominated the middle stint of the race, taking the lead of the category away from the #80 Nissan GT Academy Team RJN Nissan. But in the final stint Florian Strauss managed to retake that lead, scoring a first win of 2014. Behind the #38 Aston Martin the winners of Monza, the #43 ROAL Motorsport BMW, took third.

The Gentlemen Trophy race was a duel between the #458 GT Corse by Rinaldi Ferrari and the polesitter of the category, the #51 AF Corse Ferrari. Despite being penalised with two drive-throughs GT Corse drivers Alexander Mattschull and Frank Schmickler took their second win of the season, beating the AF Corse Ferrari by 27 seconds. The #22 Team Parker Racing Audi took third in class.

Guy Smith (#7 M-Sport Bentley): “This is the first time ever that Bentley takes a win in Silverstone, so this victory is very important to us. A little bit of history for the company, as it were. A big thanks to the team as well, they worked so hard since Monza and did an amazing job in improving the car. The pit stops were fantastic as well, I think we managed to gain two places due to a very quick first stop.”

Andy Soucek (#99 ART Grand Prix McLaren): “Although my lap times in the final stint were quite decent, I was unable to hold the Bentley off. The fact that they took the win with an extra visit to pitlane shows that they have a better pace than us. Even without the safety car, it would have been difficult to hold on to the lead. Second is still a good result for us, and we are leading the championship now.”

Laurens Vanthoor (#1 Belgian Audi Club Team WRT): “In Monza we came close to a podium finish, but were unable to overtake the car in front. Here I was determined not to let that happen again. This is an important result for us, for we had some good races this year, but did not always get the result we deserved. It’s a good boost to further improve the car and a real motivation in our preparation for the Total 24 Hours of Spa, which is our main goal this year.’

Florian Strauss (#80 Nissan GT Academy Team RJN Nissan, 1st in Pro-Am): ‘It is hard to say whether I would have managed to take the lead without the safety car, but these things happen. Sometimes you are lucky, sometimes you are not. The team did an amazing job. It was a very difficult weekend, because we only had qualifying to get used to the dry conditions, but we managed to do a good job.”

Frank Schmickler (#458 GT Corse by Rinaldi Ferrari, 1st Gentlemen Trophy): ‘The drive-throughs were my mistake, but I knew we would be able to come back from third afterwards. The car was perfect and Alexander did a perfect stint as well.”