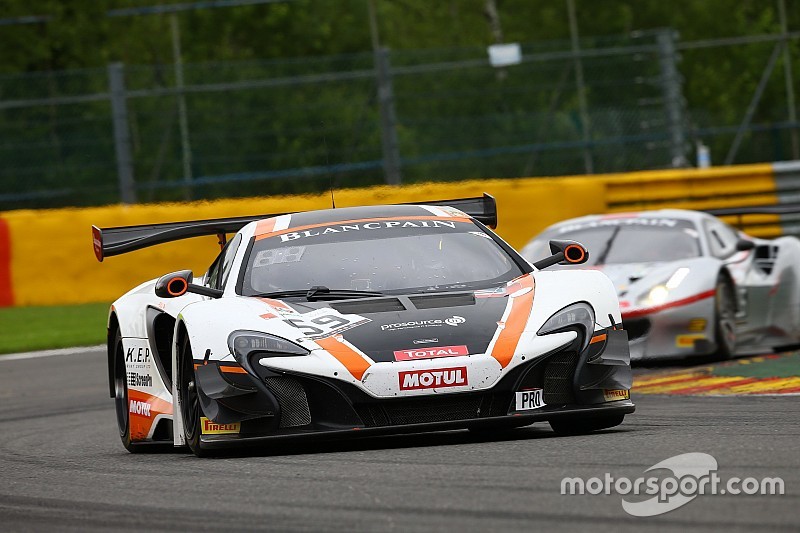 With the Official Test Day for the 2016 Total 24 Hours of Spa taking place on Tuesday July 5th, the entry list for the blue riband event of the Blancpain GT Series and Intercontinental GT Challenge is 65 cars strong. The best GT drivers in the world will be behind the wheel, confirming that the Belgian endurance classic is and remains a highlight in international motorsport.

With an unprecedented 29 cars entered in the Overall category, it is clear that the battle for victory in the Ardennes will be fiercer than ever before. Several teams have added an extra car to their line-up, most of them with factory backing. Audi Sport supports both one Team Phoenix and two Team WRT cars, with one of the latter (the #28) will see former winners Laurens Vanthoor and René Rast share the car with Nico Müller. With the elder of the Vanthoor brothers at the wheel of the #28, this means that the usual line-up of the #1 car will change: Will Stevens will share that R8 LMS with Dries Vanthoor and Fred Vervisch. Frank Stippler will join Markus Winkelhock and Christopher Mies on the #6 Audi Sport Team Phoenix R8, Stippi's place on the #75 ISR Audi being taken by Italian driver Edoardo Mortara. With Saintéloc Racing entering one car with an all-Pro line-up as well, this means that there will be eight Audi R8 LMS in the Overall category, making it the best represented make in the class.

It is also two more than the number of Mercedes-AMG in the category. Of those six cars, five are AMG supported: two at AMG-Team Black Falcon, two at AMG-Team HTP Motorsport and one for AMG-Team AKKA-ASP. On the latter regular Sprint Cup duo Felix Rosenqvist and Tristan Vautier will be joined by Renger van der Zande, while Maro Engel joins former Spa winner Bernd Schneider and Yelmer Buurman on the #00 AMG-Team Black Falcon car. On the #86 AMG-Team HTP Motorsport car, Thomas Jäger will be joined by two current DTM drivers: Spa-newbie Gary Paffett and 2013 winner Maxi Götz.

Emil Frey Racing brings not one but two Jaguars to Spa, with another driver of last year's winning trio - Markus Palttala - sharing the #114 car with Jonathan Hirschi and former F1-driver (and Spa 24 Hours rookie) Christian Klien. There will be one extra car at Garage 59 as well, with Bruno Senna, Duncan Tappy and 2016 Daytona 24h and Sebring 12h-winner Pipo Derani at the wheel of the #60 McLaren.

In the 25-car strong Pro-Am Cup, some experienced endurance drivers join the regular Blancpain GT Series Endurance Cup drivers. Darren Turner will be at the wheel of the #44 Oman Racing Team Aston Martin, while double winner Fred Bouvy will be one of the drivers on the #25 Saintéloc Racing Audi. Nicolas Lapierre, on the #75 ISR R8 LMS, joins the ranks of Audi-drivers as well.

Andy Meyrick makes his Blancpain GT Series comeback on the #24 Team Parker Racing Bentley, as does Kevin Estre on the #77 Attempto Racing Porsche. There will be plenty of factory drivers in the Pro-Am Cup as well, with Martin Tomczyk (#15 BMW Team Italia M6) and Patrick Pilet (#76 IMSA Performance) among them. Oliver Gavin joins the line-up of the #666 Barwell Motorsport Lamborghini.

New teams and familiar faces alike have decided to aim for Pro-Am Cup honours in Spa: Australian Lamborghini-squad Lago Racing will be making their second outing to the Belgian Ardennes, while there will be two new Ferrari cars as well: the #55 AF Corse 458 and the #80 Easy Race 488, with former F1 driver Andrea Montermini among their drivers.

Plenty of Prancing Horses in the Am Cup too: no fewer than six Ferraris will take the start in the Am Cup, but the Audi, Bentley and Lamborghini squads are sure to give them a hard time. The Cup class has two Porsche 991 GT3 Cup cars in it, entered by Belgian squad Speedlover and by Swiss team RMS.

The Total 24 Hours of Spa is also the second round of the inaugural Intercontinental GT Challenge. Liqui Moly Bathurst 12 Hours winners McLaren will defend their lead in the only global GT competition with three Garage 59 cars, battling against three Audi (both Audi Sport Team WRT and the single Audi Sport Team Phoenix cars), the two Bentley Team M-Sport Continental, and the Mercedes-AMG of AMG-Team Black Falcon (#00), AMG-Team HTP Motorsport (#84 and #86) and the AMG-Team AKKA-ASP (#88). In the driver standings Shane Van Gisbergen is the only driver of the Bathurst winning McLaren who will be at the start in Spa.

The Total 24 Hours of Spa action starts on Tuesday July 26th with the Bronze test.