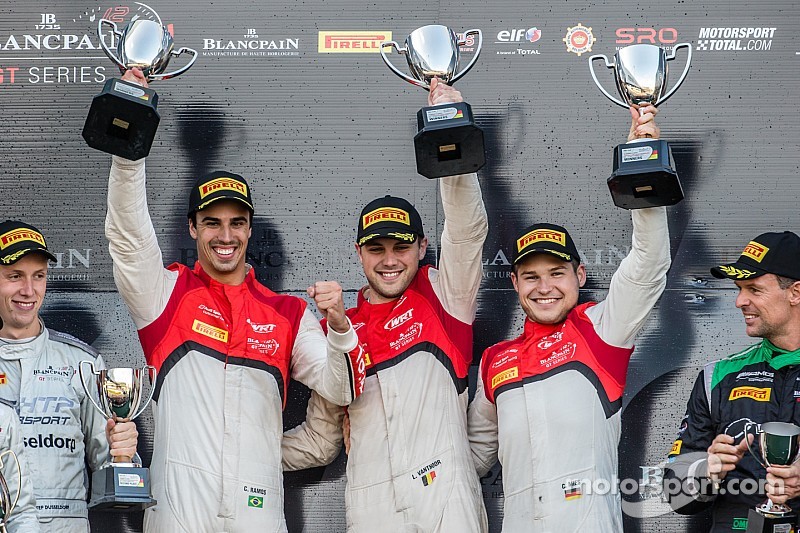 With a second consecutive win of the season Laurens Vanthoor became the 2014 Pro Cup champion of the Blancpain Endurance Series. The Belgian, sharing his #1 Belgian Audi Club Team WRT Audi with Christopher Mies and Cesar Ramos, was never threatened during an eventful iRacing.com Nürburgring 1000.

During a race which was marked by heavy rainfall, each of Vanthoor’s potential rivals made mistakes or suffered technical problems. The Pro Cup team’s title went for the third time in four years to the Belgian Audi Club Team WRT.

Rest of the podium

The #85 HTP Motorsport Mercedes of Stef Dusseldorp, Sergey Afanasiev and last year’s champion Maximilian Buhk finished in second, with the #19 Black Falcon Mercedes of Hubert Haupt, Abdulaziz Al-Faisal and Andreas Simonsen scoring its best result of the season in third.

In Pro-Am the drivers’ title went to the Italian duo of Andrea Rizzoli and Stefano Gai, despite finishing only third in the category at the Nürburgring. The Pro-Am win went to the #12 TDS Racing BMW of Nick Catsburg and Henry Hassid, which gave the French team the runner-up spot in the Pro-Am Cup teams’ standings, behind the Scuderia Villorba Corse.

In Gentlemen Trophy, the race started badly for the championship leaders Peter Mann and Francisco Guedes, when their team-mate Filipe Barreiros went into the gravel trap during the opening hour of the race. The #51 AF Corse Ferrari managed to rejoin the track however, and finishing 7th in the category proved to be just enough to conquer the drivers’ and teams’ titles.