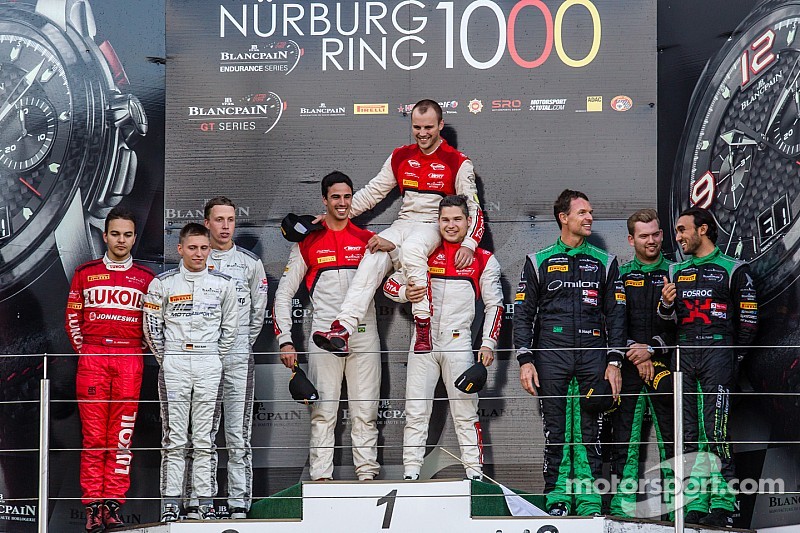 Ingolstadt — Laurens Vanthoor in the Audi R8 LMS ultra won the driver title in the Blancpain Endurance Series (BES) for Audi Sport customer racing. In the season finale, the Nürburgring 1000, the mere 23-year-old Belgian together with Christopher Mies and César Ramos was victorious in difficult conditions.

In addition, the 33 points awarded for the victory at the Nürburgring earned the Belgian Audi Club Team WRT the team title in the prestigious endurance racing series. With that, the driver and team titles have gone to Audi for the third time in the Blancpain Endurance Series that has existed since 2011.

Vanthoor, who together with the Germans Markus Winkelhock and René Rast had won the 24-hour race at Spa-Francorchamps at the end of July, had traveled to the Nürburgring as the sole leader of the standings with a seven-point advantage. His team-mate Christopher Mies put the #1 Audi R8 LMS ultra on the pole position in qualifying. In the race that was started behind the safety car in pouring rain, start driver Christopher Mies stood his ground in the pack of front runners.

In second place, he turned over driving duties to the Brazilian César Ramos. Shortly after the turbulent races midpoint, Christopher Mies took the lead. Laurens Vanthoor defended the top position on a drying track and after six hours of racing crossed the finish line with an advantage of 57 seconds.

Thanks to the team-mates

Obviously, after having won the Sprint Series last year, Im overjoyed about now winning the Endurance Championship. This shows that were competitive in both series, said the Belgian. Id like to thank my team-mates without whom I couldnt have clinched this title because in Markus Winkelhock, René Rast and Marc Basseng, and now here in the finale in Christopher Mies and César Ramos, Ive had strong drivers running with me this season.

After the tough first three races, it didnt look like we were going to again clinch the title, said WRT team boss Vincent Vosse. The turnaround happened when we clinched victory in the Spa 24 Hours. In the finale, all three drivers showed an absolutely impeccable performance on a slippery track in pouring rain and poor visibility. Winning both titles with a victory in such a race  you cant do better than that.

The #26 R8 LMS ultra of Team Saintéloc Racing became an early victim of the extremely difficult conditions. Stéphane Ortelli/Edward Sandström/Grégory Guilvert (MC/S/F), who had arrived at the Nürburgring as the runners-up in the standings, had to bury their championship ambitions after start driver Sandström had been touched by another vehicle and slid into the gravel trap at an early stage. The run of Super-G world champion Didier Cuche in the R8 LMS ultra of the Audi race experience was over early as well, following an off-track excursion by his team-mate Rahel Frey.

The title win in the Blancpain Endurance Series, one of the worlds most challenging GT3 championships, marks another highlight in the customer sport program with the Audi R8 LMS ultra, commented Romolo Liebchen, Head of Audi Sport customer racing. Sincere congratulations to Laurens Vanthoor and the WRT squad. But Saintéloc Racing fought a respectable battle as well, albeit the team was unfortunate in the finale. Congratulations also to Ian Loggie and Julian Westwood from Team Parker Racing, who were the front runners in the Gentleman Trophy in the finale.

Villorba Corse is Pro-Am Cup champion at the Nurburgring 1000