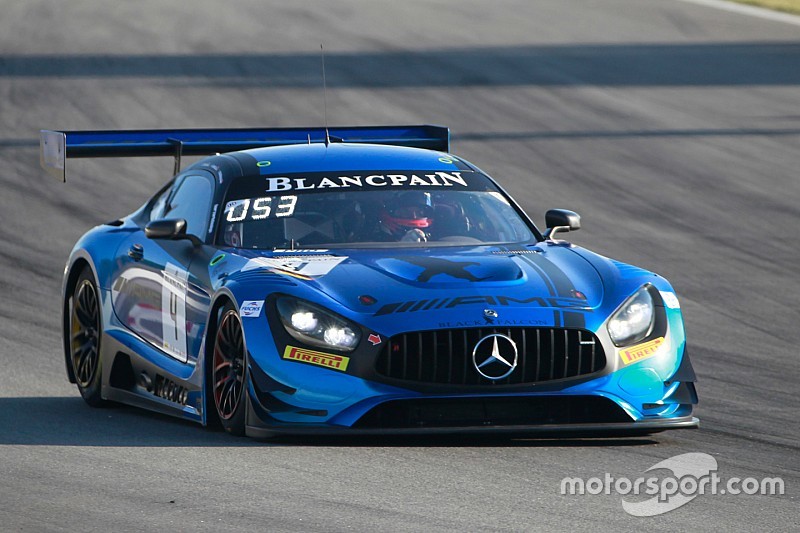 The Black Falcon team had claimed the point for pole position to move level on points in the Endurance Cup standings with Marciello, whose AKKA ASP Mercedes team he shared with Daniel Juncadella and Tristan Vautier was only sixth on the grid.

Buurman crossed the line less than two seconds up on the AKKA ASP team, despite the Black Falcon Mercedes building up a substantial lead while the rest of the field was backed up behind the R-Motorsport Aston Martin driven by Nicki Thiim.

Engel had built up a lead of more than 20 seconds in the opening stint of the three-hour race, only for a series of safety cars to eradicate his advantage.

The fourth safety car of the event turned the race into a winner-takes-all sprint to the flag with five minutes left on the clock.

Buurman was just four tenths up on Vautier as the race went green, before edging away over the final four laps.

From sixth, Marciello had moved up to third by the time the first round of refuelling stops began, but Juncadella just failed to get ahead of Jake Dennis in the Aston Martin during the pit cycle.

Vautier then moved ahead of the British car during the second round of stops as Matthieu Vaxiviere took over, but the Merc driver was never able to get close enough to Buurman to mount a victory bid through the final hour.

Second place for Marciello was enough to give him the overall BGTS title to go with the Sprint Cup crown he claimed at the Nurburgring earlier in the month.

Molina was running sixth in the final hour before Dries Vanthoor in the best of the WRT Audi R8s nerfed Vaxiviere off the track.

The Aston retired as a result of its trip through the gravel, while the Audi that Vanthoor shared with Christopher Mies and Alex Riberas was penalised for avoidable contact.

Molina was subsequently able to pass the Emil Frey Jaguar G3 driven by Mikael Grenier to take the final spot on the podium.

The Silver Cup class-winning Jaguar, which Grenier shared with Adrian Zaugg and Alex Fontana, moved into an unlikely lead early in the third hour when it made its final pitstop under virtual safety car conditions.

Grenier's lead was short-lived, but it held on to take fourth overall in what is the last race for the XK-based car.

The Pro-Am cup class went to the Lazarus Racing Lamborghini shared by Miguel Ramos, Fabrizio Crestani and Giuseppe Cipriani, the former boss of the Il Barone Rampante team of the early 1990s.