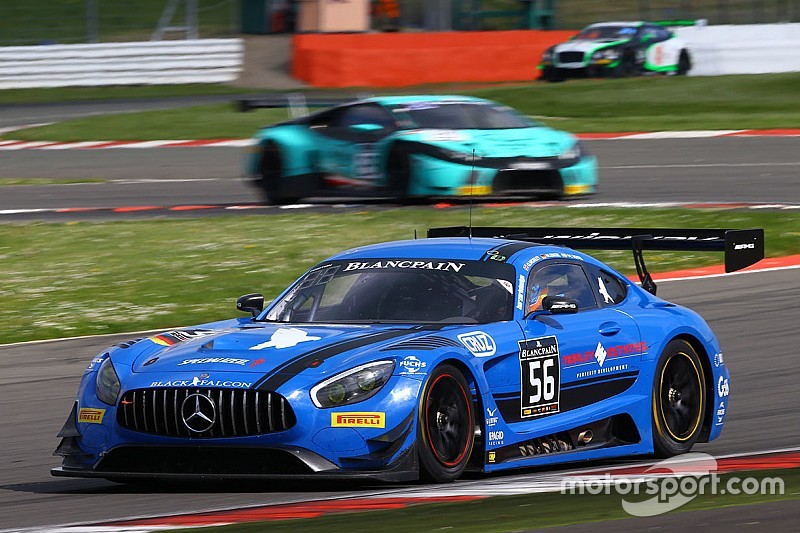 The six-hour, 1,000km endurance race – twice the length of a regular Blancpain event – was held at the iconic Circuit Paul Ricard at Le Castellet.

The third round of the Blancpain GT Series Endurance Cup brought mixed results for Team Black Falcon, with the team’s two full-season entries making it the finish of the gruelling six-hour race, but a non-finish for their third Mercedes-AMG GT3. #56 finished in 17th and sixth in class, which secures them third position in the Pro-Am driver standings, whilst #57 finished 34th and the #00 car was heartbreakingly forced to retire in the dying moments of the race after being set to post a great result.

The six-hour, 1,000km endurance race – twice the length of a regular Blancpain event – was held at the iconic Circuit Paul Ricard at Le Castellet, not far from Marseilles in the south of France. Whilst half the team shivered in the rain at the Nürburgring for the fourth round of the VLN in Germany, the other half basked in the heat of the Côte d'Azur – but unfortunately the sun didn’t shine on the race for Team Black Falcon. In a race that saw serious attrition, almost a third of the 57 cars entered either didn’t finish or encountered major delays that took them out of the running.

The opening practice sessions were inconclusive, and it wasn’t until the Pre-Qualifying session that the #57 car was able to break into the top 10; the other two Mercedes-AMG GT3s were secure in the mid-field of the massive 57 car entry. #57’s improved pace continued into qualifying proper, with seventh fastest lap in Q1; #00 took up the team lead position with 14th fastest time in Q2. The times got quicker as the morning qualifying session wore on, and both Yelmer in #00 and Maro in #56 brought their cars’ lap-times down into the 1:57s in the final segment of qualifying. These fantastic performances put both cars in the top 10 when the times were aggregated, with #00 in ninth and #56 just behind. The two cars were by far the quickest Mercedes on the grid, on a track that just didn’t seem to suit the car.

At 6pm the 57 cars entered the final corner to take the rolling start for six hours of racing that would take them from the heat of early evening through to the pitch black of midnight. Yelmer was at the wheel of #00, Maro in #56 and Hubert in #00. The three Team Black Falcon Mercedes avoided the chaos of the start and made it through the first lap unscathed, as the enormous grid tried to thread its way through the opening chicanes and down the incredibly fast 1.8km Mistral Straight, opened up to its full, uninterrupted length for this race. Cars were running four-wide at absolute maximum speed, which was terrifying to watch, let alone be a part of.

As the first hour ticked by, the racing was no less frantic. Maro had brought #56 up into sixth, with Yelmer just two places behind. Hubert put in another stunningly forceful recovery drive, making up 18 places to 23rd position. The sun set over Paul Ricard with half the race left to run, and with no floodlighting around the majority of the track there were a number of incidents. Three full-course yellow periods interrupted the race, throwing curveballs into the team’s strategy, especially when a Bentley had a heavy hit into a barrier which required the protective tyre wall to be replaced.

Unfortunately as the race drew to a close, several problems hit Team Black Falcon’s cars. #56 had continued to run strongly in the top 20, but was forced to pit because of debris lodged in the front of the cooling ducts of the Mercedes – that dropped them back a significant number of places. The #00 crew had delivered a fantastic performance and looked set for a top 10 finish, but then the race turned against the car. In the final hour first #00 encountered drive problems whilst running as high as fifth and had to retire. #57 just wasn’t able to move forward, and they were disappointed to finish in the mid-field, though pleased to bring the car home unscathed.

The next round of the Blancpain GT Series Endurance Cup is even more of a punishing event: it’s the classic Spa 24 Hours, a round-the-clock marathon that will push the team, drivers and cars to the limit.