Porsche took its first victory in the Blancpain GT Series Endurance Cup for nearly seven years at this season's opening round at Monza. 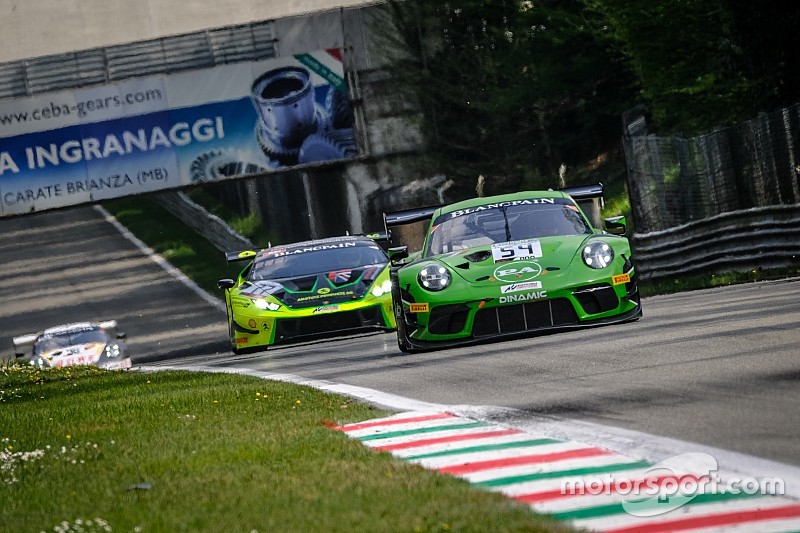 The Italian Dinamic Motorsport squad took the win on its series debut to claim the first Porsche win since the Nurburgring round of what was then known at the Blancpain Endurance Series in September 2012.

Klaus Bachler, Zaid Ashkanani and Andrea Rizzoli came through a rain-affected race that was interrupted by two safety car periods to take a 14-second victory in the #54 Porsche 911 GT3 R.

Bachler was closing on the leading Sainteloc Audi R8 LMS when Christopher Haase was hit by a left-rear puncture with 25 minutes of the race left to run.

Former GP3 driver Ashkanani brought the car started from 22nd on the grid by Rizzoli into contention in the middle hour of the race, and the Kuwaiti was running third as the second and final round of pitstops began.

Bachler quickly moved into second behind the Sainteloc Audi that Haase shared with Steven Palette and Simon Gachet. The gap between the two leaders went up to as much as five seconds before Bachler started to make inroads into the Audi's advantage prior to its puncture.

The FFF Racing team Lamborghini Huracan GT3 Evo driven by team co-owner Andrea Caldarelli, Marco Mapelli and Dennis Lind took second place after dropping down the order when Lind had a minor off early in the race.

The Black Falcon Mercedes-AMG GT3 driven by Maro Engel, Yelmer Buurman and Luca Stolz took third from 14th on the grid, while Felipe Fraga brought the Auto Sport Promotion Mercedes he shared with Nico Bastian and Timur Bogulavskiy up to fourth in the final stint.

The lead ASP Mercedes ran at the front in Raffaele Marciello's hands in the middle hour of the race in what was ultimately an unsuccessful gamble on slick tyres.

Mirko Bortolotti led early on in best of the Grasser Lamborghinis before the car dropped down the order after Rolf Ineichen was sent out on slicks. The ASP Merc and the Grasser Lambo both failed to finish the race, retiring with suspension and electrical issues respectively.