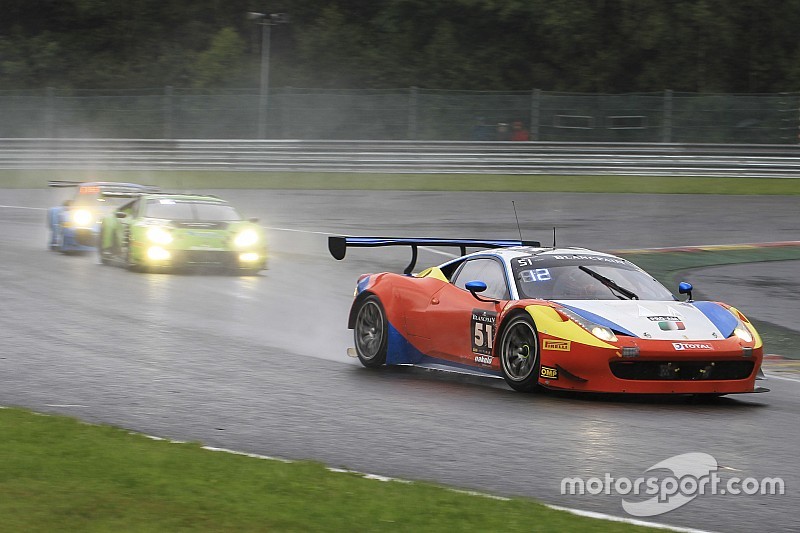 The final round of the 2015 Blancpain Endurance Series will see several teams and drivers competing at Nürburgring.

At the iRacing.com GT500, the final round of the 2015 Blancpain Endurance Series, four of the six titles are still up for grabs. Both in the Pro Cup and the Am Cup there are several teams and drivers who can still lay their hands on one of the most coveted crowns in GT Racing.

Matt Griffin and Duncan Cameron will probably be the most relaxed drivers at the upcoming iRacing.com GT500 race at the Nürburgring. Through their excellent performance in the Belgian Ardennes at the end of July – when, together with Davide Rigon and Francisco Guedes, the Irish-British pairing finished second in the Pro-Am Cup in the Total 24 Hours of Spa – the AF Corse drivers are the only frontrunners of the Blancpain Endurance Series who have a 2015 title in their pockets. The same goes for AF Corse in the Pro-Am Cup teams rankings, where the Italian squad has the title in the bag. In both the Pro and Am Cups, the fight is still wide open.

In the Pro Cup, there are four candidates for the drivers’ title. Through their consistency – they only failed to score at Paul Ricard – the experienced duo of Frank Stippler and Stéphane Ortelli are in the best position to grab the crown. Driving the #2 Belgian Audi Club Team WRT car, they will be joined by Stéphane Richelmi, and second or better would give Stippler and Ortelli the title. This would make Ortelli the only double champion in the Blancpain Endurance Series Pro Cup history, after winning the title in 2012, together with Christopher Mies and Christopher Haase.

With Spa-winners Nick Catsburg, Markus Palttala and Lucas Luhr absent at the Nürburgring the closest rivals for the Audi-duo are ROWE Racing drivers Stef Dusseldorp and Nico Bastian. With a deficit of eight points, winning is not enough for the Mercedes drivers, even then they need another car between themselves and the #2 Audi. Just like in Paul Ricard and Spa Dusseldorp and Bastian will be joined by Daniel Juncadella, but since the Spanish youngster (fifth in the standings) drove on another car at the opening two rounds of the series, he is out of contention for the title.

Third candidate for the title, nine points behind the series’ leaders, are the Paul Ricard winners in the #23 Nissan GT Academy Team RJN car. Wolfgang Reip, Katsumasa Chiyo and Alex Buncombe were on top of the standings before the Total 24 Hours of Spa, but a relatively poor performance - at least for their standards - left them lacking in points. All is not lost however.

The same goes for Bentley Boys Andy Meyrick, Guy Smith and Steven Kane. A no-score in Spa means that they now need to close a 15-point gap, which means they need at least a podium finish, while hoping their rivals score few or no points.

These drivers all represent squads that have a shot at the teams’ title as well, but the Belgian Audi Club Team WRT, ROWE Racing, Nissan GT Academy Team RJN and M-Sport Bentley have an additional rival in the form of GRT Grasser Racing Team. The Lamborghini squad, winners in Monza and fourth in Le Castellet, need to close a 19-point deficit on the leaders with 25 points on the board.

In the Am Cup the season finale is just as exciting. Four sets of drivers are still in the contention for the biggest cup at the end of the season. Team Parker Racing duo Ian Loggie and Julian Westwood lead the standings after scoring maximum points at the Total 24 Hours of Spa. Like in Spa they will be joined by Benny Simonsen at the Nürburgring. Loggie and Westwood hold excellent memories of the German track, having taken the class win at last year’s season finale.

Despite their absence in Spa Glorax Racing-trio Fabio Mancini, Andrey Birzhin and Rino Mastronardi are still very much in the running for the 2015 Am Cup title. Their three podium finishes (with a win at Paul Ricard) in the opening three rounds of the season gave them 66 points, only five less than Loggie and Westwood. Just one point behind the Glorax-racers are the only drivers in the Am Cup that scored points on every occasion this year. Through their consistency Jürgen Häring, Dimitrios Konstantinou and Frank Schmickler take the #56 Attempto Racing Porsche to their home race as third in the standings. A win at the Nürburgring would give them the title.

But apart from the Team Parker Audi, the Glorax Racing Ferrari and the Attempto Racing Porsche there is another Prancing Horse out to claim the title. Stephen Earle, Marco Zanuttini and Liam Talbot claimed the win in Monza with their Kessel Racing 458 Italia, then suffered a major setback in Silverstone, but a well-deserved podium finish in Spa kept them in the running for the crown. They do need to finish first or second however, in order to close the 16-point gap towards the leaders.

With the Blancpain Endurance Series heading for its final round of 2015, the Blancpain GT Series is in the final straight as well. Belgian Audi Club Team WRT wrapped up the teams' title in Algarve - the Belgian squad now has an unassailable lead of 104 points - but the drivers' title fight is far from decided. With 91 points available at the remaining three rounds of the Blancpain GT Series (one endurance event and two sprint meetings) the season will not be decided at the Nürburgring. For the moment, Laurens Vanthoor and Robin Frijns - sharing the #1 Audi of the Belgian Audi Club Team WRT with Jean-Karl Vernay - have a 34-point lead over their team-mate Stéphane Ortelli. A win in Germany would give the Monegasque driver not only the Blancpain Endurance Series title, but also help him to reduce the deficit towards Frijns and Vanthoor. Nine other drivers still have a mathematical chance of winning the drivers' crown in the Blancpain GT Series.

With Sebastien Loeb Racing (#3 Audi R8 LMS) and TF Sport (#27 Aston Martin Vantage) joining the Pro-Am Cup the grid is 56 cars strong, making the iRacing.com GT500 a fitting end to an exciting 2015 Blancpain Endurance Series season. And if the Eifel weather gods decide to have their say in the proceedings as well, we might see a surprise or two.