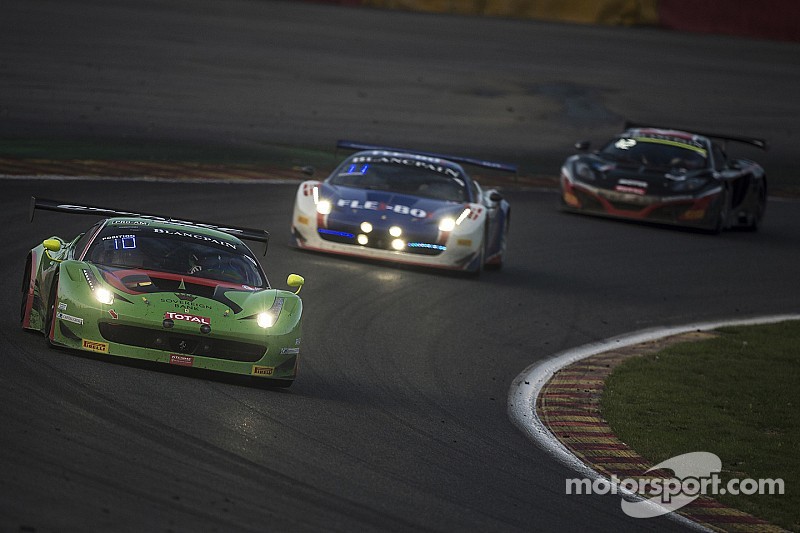 Norbert Siedler’s first race in the Ferrari 458 GT3 did not go according to plan: Already after four and a half hour the car of GT Corse by Rinaldi was in the middle of a heavy crash with Vadim Kogay behind the wheel. But the 24 Hours of Spa-Francorchamps had started promising for the Austrian and his team-mates Marco Seefried (GER), Rinat Salikhov (RUS) and Vadim Kogay (RUS).

Already the start into weekend was not trouble-free for the four drivers. In the practice sessions and the qualifying runs they could not do their planned program. “Several small technical issues cost us a lot of time. We were not fully prepared in the qualifying and therefore only qualified on the 30th position,” Norbert Siedler looks back. “But this was not the team’s fault. The guys of Rinaldi Racing worked extremely hard and did a good job.”

In the warm-up finally all problems were gone and the green Rinaldi-Ferrari claimed the first position. “This raised our hopes,” reports Norbert Siedler. Also the start phase of the endurance classic on the “Ardennes roller-coaster” was promising. Marco Seefried, who drove the start, took the race car from Maranello safely through the first laps and won some positions – a good performance, which was continued by Norbert Siedler, who was in charge of the second part of the race. After the first stints they were among the Top-20, with the Top-10 of the PRO-AM class in reach.

But a huge shock came a little more than four and a half hour after the start: On the TV screen was the car with the starting number 333 – burning and totally destroyed at the exit of the Stavelot-corner. Also involved in the crash was the Ferrari of Kessel with the Brit Marcus Mahy behind the wheel, who had suffered an even heavier impact. For the involved teams the sporting situation became unimportant as both drivers had to be taken to the hospital. While Siedler’s team-mate Vadim Kogay could leave the hospital on Sunday noon, Marcus Mahy is still under Medical treatment.

"The only thing which is important right now, is the situation of Vadim and Marcus Mahy,“ emphasizes Norbert Siedler. “The news that his life is no longer at risk according to his team was a huge relief for everyone. We are crossing our fingers for the ongoing recovery. Luckily Vadim was able to fly home on Sunday.”

There is no time to relax for Norbert Siedler: Already at the next weekend his home-race in the Porsche Carrera Cup Germany is on the schedule. On the Red Bull Ring in Spielberg (AUT) the Austrian wants to reach a top-result together with his team ZaWotec Racing. The Austrian has good memories with the track: “One year ago I brought two trophies home from the Carrera Cup race there,” he knows.

Dramatic conclusion to 24 hour adventure for Al Harthy at Spa