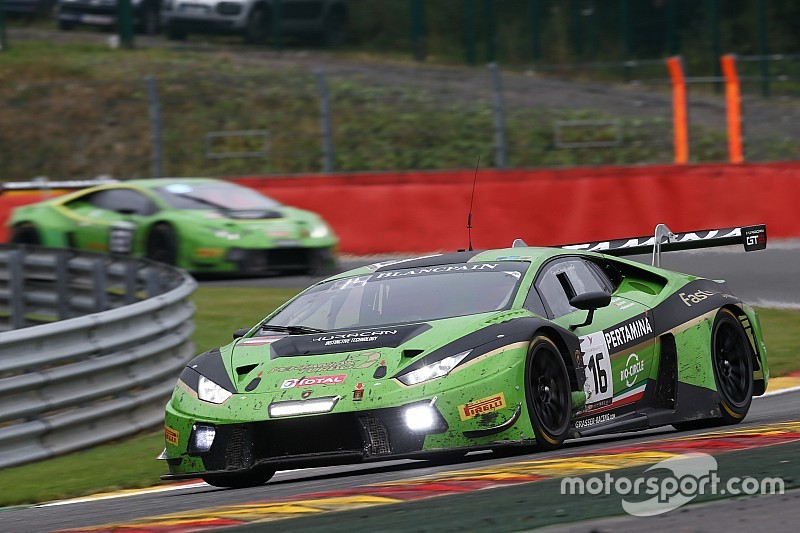 Garage 59's Rob Bell, Shane van Gisbergen and Come Ledogar became the 2016 Blancpain Endurance champions despite only finishing 30th in the Nurburgring race, which was won by the #16 GRT Grasser Lamborghini.

The #58 Garage 59 entry started the race only 21st and, although Bell recovered to 11th during the first hour, he was handed a drive-through penalty for causing a collision with Marco Bonanomi.

His teammate Duncan Tappy spent most of his stint 18th but the Briton, subbing for van Gisbergen who was on Australian Supercars duties, was also involved in a contact and had to pit with a puncture.

That left Ledogar starting the final hour outside the top 30 and without a chance to score any points.

Out of the #58 car's three rivals, the #84 HTP proved to be the only one with a chance to steal the title.

The Mercedes had to finish in the top three be crowned champion from fourth on the grid and, while Dominik Baumann lost a place at the start, Jazeman Jaafar reclaimed it and closed in on third.

However, Maximilian Buhk couldn't keep up with the top three and had to settle for fourth, falling one point short of the title.

The #99 Rowe BMW and the #8 M-Sport Bentley, the other two cars starting the race with a chance for the title, finished 10th and 19th respectively.

The race kicked off with an all-GRT Grasser front row, with Mirko Bortolotti's #16 leading the #19 of Luca Stolz.

Stolz soon fell behind WRT's Frederic Vervisch, who stayed within five seconds of the leader.

Teammate Dries Vanthoor closed in on Bortolotti's squadmate Rolf Ineichen during the middle part and the gap disappeared at the beginning of the final hour due to a safety car stint.

The neutralisation was due to Louis Macheis hitting the tyre wall.

While Laurens Vanthoor put pressure on Christian Engelhart until the finish, the German did not put a foot wrong and made it home in first, delivering the win for the #16 Grasser car.