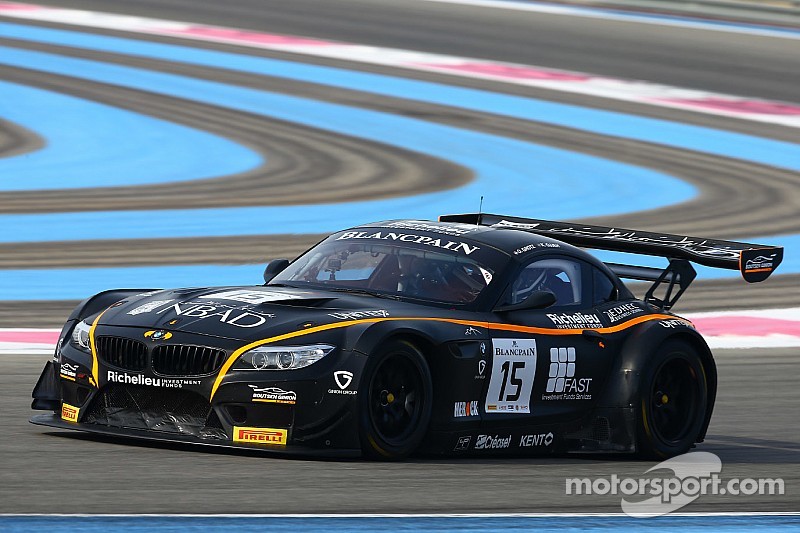 With over 45 cars participating in the two Official Test Days at Circuit Paul Ricard, the 2015 Blancpain Endurance Series has shown a clean bill of health.

The level of the teams and drivers is higher than ever, which was confirmed by the small differences in lap times.

Even though these two days of testing at Circuit Paul Ricard in the South of France were more about improving the cars for the 2015 season than about clocking a good lap time, the numbers on the timesheets give a glimpse of what we can expect during the 2015 season of the Blancpain Endurance Series.

With thirteen cars within the same second on the second day of testing it was clear that every little detail will be important in increasing the competitiveness of the cars. After the #88 Reiter Lamborghini Gallardo took the honours on the opening day, it was the #12 TDS Racing BMW Z4 that set the quickest day on Thursday, beating the #17 Insightracing Denmark Ferrari by just over two tenths of a second.

These are races that any team and any driver would be proud to win,

The fact that there were barely any incidents of note during the two days of testing on Circuit Paul Ricard only confirmed that the Blancpain Endurance Series will enjoy a high level of racing in 2015. With plenty of new cars in action, as well as teams testing their new 2015 machinery, there was no lack of interest from fans, media and teams alike. The ideal weather conditions only added to the pleasure of watching the best GT teams and drivers hurtling their GT3 chariots around the 5.791 km long ribbon of asphalt.

The cars that claimed most of the attention were the new Lamborghini Huracán of Grasser Racing Team and the McLaren 650S of Von Ryan Racing, both making a first time appearance in an official Blancpain Endurance Series session. There was also pleasant surprise in the form of the unannounced and new Audi R8 LMS ultra. The striking white machine will participate in its first Blancpain GT Series race during the course of the season.

Some teams also took the opportunity to announce their line-ups for the upcoming season. In the MRS GT Racing Nissan GT-R Nismo, Craig Dolby and Sean Walkinshaw will be accompanied by former LMP2 Le Mans winner Martin Plowman. The 27-year old made his GT debut during the testing days and although satisfied with his performances, Plowman admitted that he still had a lot to learn.

The #23 Nissan GT Academy Team RJN Nismo GT-R will be driven by Frenchman Gaetan Paletou and Mexican Ricardo Sanchez, laureates of the European and International GT Academy competitions in 2014. Other teams are finalising their line-ups for the upcoming season and the coming days should see a number of interesting announcements.

Martin Plowman (#14 MRS GT Racing Nissan GT-R Nismo GT3): “The Blancpain Endurance Series takes us to some fantastic circuits, with big grids and more than 20 cars in the Pro class alone. These are races that any team and any driver would be proud to win, in particular the blue riband event, the Total 24 Hours of Spa. A race I would love to add on my CV alongside the Le Mans win!”

Renaud Dufour (Technical Director Bentley Team HTP): “We are rather satisfied with the progress we have made. The car proves to be very competitive. We have tried several set-ups, and gave the drivers plenty of opportunity to get acquainted with the car. The Bentley Continental GT3 is a very reliable machine, and easy to drive. We still have some work to do, but we are getting there, step by step. Even though the size of the car means that some tracks will suit it better than others, we hope to be at the front from the opening round of the 2015 season.”

Gottfried Grasser (Team Principal Grasser Racing Team): “The Huracán has shown during these and previous tests that it is a very strong car. We have completed some 8.000 kms during winter testing, and have not encountered one major problem. It is the best way to start the season. Performance-wise we will see where we are at the first race, but since I think that most lap times here in Le Castellet were representative, I guess we should be able to finish inside the top 10. Of course we would love to win, but such a result would be a good base to start from. Don’t forget that there still is some development to do on the Huracán. But these tests have shown that we have taken the right approach, this car is perfect for the future.”

Blancpain Endurance Series back on track for preseason testing

Plowman to race Nissan in BES