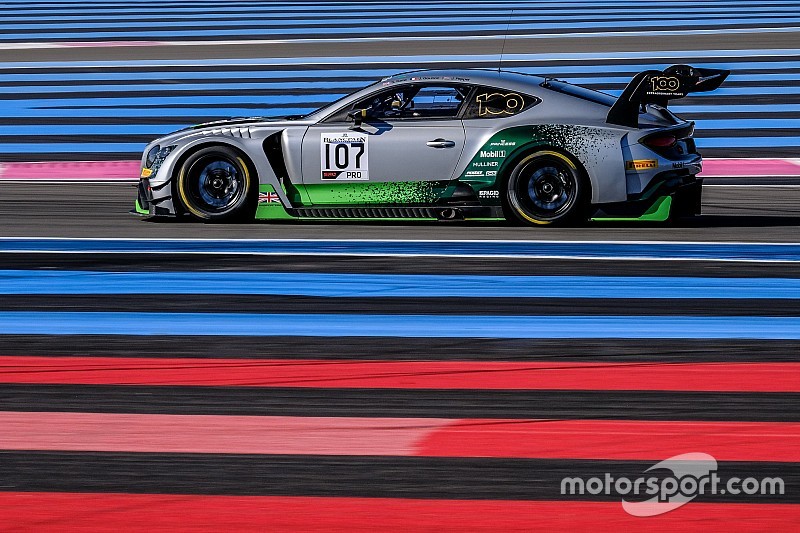 Bentley made up for its 2018 disappointment at Paul Ricard by dominating this year's edition of the Blancpain GT Series Endurance Cup's 1000km race.

Jordan Pepper, Steven Kane, and Jules Gounon missed out on victory 12 months ago after being overtaken by the Emil Frey Lexus with three corners to go.

This year they dominated from pole in the #107 car, sticking to the original strategy of pitting at the top of the hour, while others stopped early during the first hour under safety car conditions.

The M-Sport-run team also had luck on its side during the race as the safety cars and full-course yellows came out at the right time for its strategy, which allowed the team to pit and retain the lead under cautions.

Pepper, Kane and Gounon also survived a late scare when a wheelnut got stuck in the wheel gun while changing the front-left tyre, which cost the team 14 seconds, but they still managed to stay out ahead of the #72 SMP Racing Ferrari 488 GT3 that finished in second with Miguel Molina, Mikhail Aleshin and Davide Rigon.

The #72 car had worked its way to the lead of the race with two hours remaining after starting from 16th on the grid.

But a drive-through penalty for a pitlane infringement in which the car was jacked up twice dropped them back to second.

Kirchhofer came home fourth in the car he shares with Jake Dennis and Alex Lynn.

The early part of the race had been disrupted by two safety car periods in the first hour that lasted over 30 minutes in total, during which a number of teams pitted early to get their joker stops out of the way.

The first safety car came out after only one and a half laps of racing as the #444 HB Racing Ferrari and the #2 WRT Audi came together at the fast right-hander at Signes, causing significant front-end damage to both cars.

Then two laps after that safety car period ended, the race was paused again as the #27 Lazarus Lamborghini collided with the #55 Attempto Audi - which spun backwards across the final corner and collected the #78 Barwell Lamborghini.

The majority of teams that took advantage of the early cautions to clear pitstops couldn't make the strategy work later in the race - including reigning champions Maro Engel, Luca Stolz and Yelmer Buurman, who finished only 15th.

The ASP team won both the Silver Class, with Nico Bastia, Timur Boguslavskiy and Felipe Fraga, and the Pro-Am class with Jim Pla, Mauro Ricci and Jean-Luc Beaubelique.