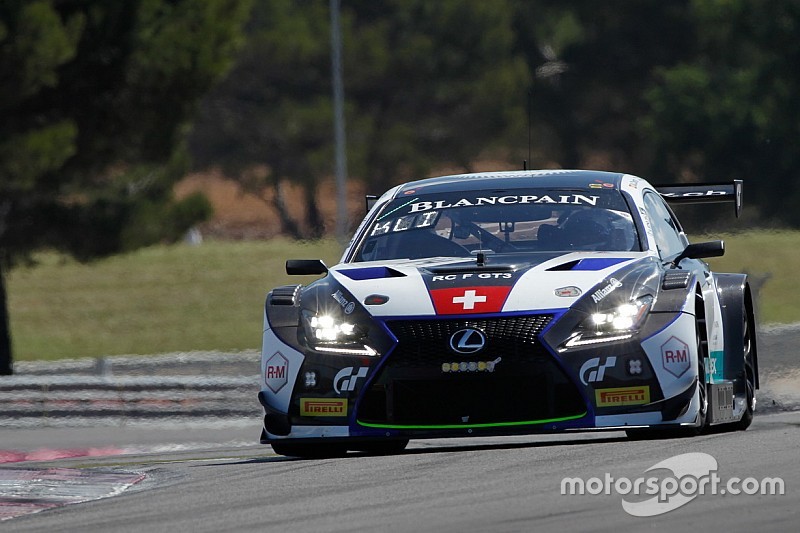 A Lexus won a Blancpain GT Series race for the first time after taking the lead on the last lap of a truly incredible Endurance Cup race at Paul Ricard.

The Bentley crew of Jordan Pepper, Steven Kane and Jules Gounon – that qualified down in 18th place – claimed the lead with 40 minutes of the six-hour contest remaining when the SMP Racing Ferrari 488 of Miguel Molina lost a wheel.

But after a late full course yellow for a damaged kerb, the Emil Frey Lexus RC F of Marco Seefried, Christian Klien and Albert Costa closed right in and Costa pounced with three corners to go.

For the first five hours, the race was controlled by the Garage 59 McLaren 650S of Ben Barnicoat, Andrew Watson and Come Ledogar. They had built a 20-second advantage until two consecutive safety car periods bunched the pack up and erased their lead.

The SMP Ferrari crew then used their shorter joker pitstop to grab first place after the final round of stops – with more woe following for the Garage 59 McLaren squad as they received a drive-through penalty for having two mechanics in the working area of the pitlane when the car departed.

Despite this, Barnicoat, Watson and Ledogar still took third behind the Bentley.

A number of other early season frontrunners also dropped out in the first half of a frenetic race. The WRT Audi of Dries Vanthoor, Alex Riberas and Christopher Mies retired with two hours gone with a starter motor issue when running third.

“I gave it all I had in my stint and I was thinking about not doing anything stupid for the championship,” said a devastated Vanthoor, who was leading the standings after winning the opening round at Monza.

“We were in a good position and to have a problem like this – I don’t know what to say.”

Barnicoat had grabbed the lead at the start after the polesitting R-Motorsport Aston Martin of Jake Dennis had a “bit of a disaster” as the race began, with the Briton losing power and plummeting down the order.

“It didn’t exactly go to plan!” said Dennis, who won the previous Endurance contest at Silverstone. “I honestly have no idea what happened.

“I lost all power as it went to green. I pulled every paddle to try and give me the grunt I needed.”

He did eventually get going and, after surviving contact in the early skirmishes, worked his way his way back into contention over the opening stint.

But there was then more woe as a left-front suspension failure, while Nicki Thiim was at the wheel, dropped them towards the rear of the field.

Further back, there was some success for McLaren still as Alexander West, Chris Harris and Chris Goodwin won the Am class.