During the Free Practice and Pre-Qualifying sessions for the Silverstone round of the 2014 Blancpain Endurance Series the teams and drivers had plenty of opportunity to hone their driving skills in the wet. When the track dried at the end of the second session, lap times came down swiftly, with Andreas Simonsen in the #19 Black Falcon Mercedes clocking the fastest lap, beating a pair of Belgian Audi Club Team WRT cars.

It was a dark and cloudy sky that greeted the 44 teams on this Saturday morning at Silverstone Circuit. The Free Practice session started in the wet, with half of the cars remaining in pitlane, waiting for an improvement in the conditions. That improvement never came and after less than half an hour of driving all cars returned to their pit boxes, only to reappear some twenty minutes before the end of the session.

But the drivers were able to make up for that lack of running during the 90 minute pre-qualifying session in the afternoon. Although the track was still very wet at the beginning of the session, the rain had ceased to fall. Still, several drivers were caught out by the conditions, but all were able to rejoin the track. 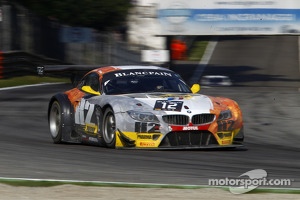 With half an hour to go, a dry line started to form and Daniel Lloyd in the #107 Beechdean AMR Aston Martin was the first to set a lap time under 2’10, improving the previous best time of Hubert Haupt in the #19 Black Falcon Mercedes by almost six seconds. Times kept coming down and when Nick Catsburg in the #12 TDS Racing BMW set a 2’03.956 with less than ten minutes to go, it seemed for a moment that the Dutchman would remain on top of the rankings until the end of the session.

But Andreas Simonsen, who had taken over from Haupt at the wheel of the #19 Black Falcon Mercedes, put in an inspired lap to improve Catsburg’s time by four tenths of a second. #1 Belgian Audi Club Team WRT Audi driver Cesar Ramos was on his way to follow suit, but a spin made him settle for third, just behind team-mate Christopher Mies in the #3 Belgian Audi Club Team WRT Audi.

Catsburg eventually lost top spot in the Pro-Am category as well, when TDS Racing team-mate Nicolas Armindo edged in front and took fourth overall. In the Gentlemen Trophy there was no match for the speed of Andy Schulz in the #128 Horse Power Racing Aston Martin, who beat his nearest competitor, Julian Westwood in the #22 Team Parker Racing Audi, by over four seconds.

Tomorrow, Sunday May 25th, the action starts at 9 AM, with 60 minutes of qualifying. The three-hour long race will get underway at 2.55 PM. Weather forecasts say it should remain dry throughout the day.

WRT 'widened the eyes' of its rivals with LMP2 title success

Title favourite WRT has "surprised everyone" in first WEC season