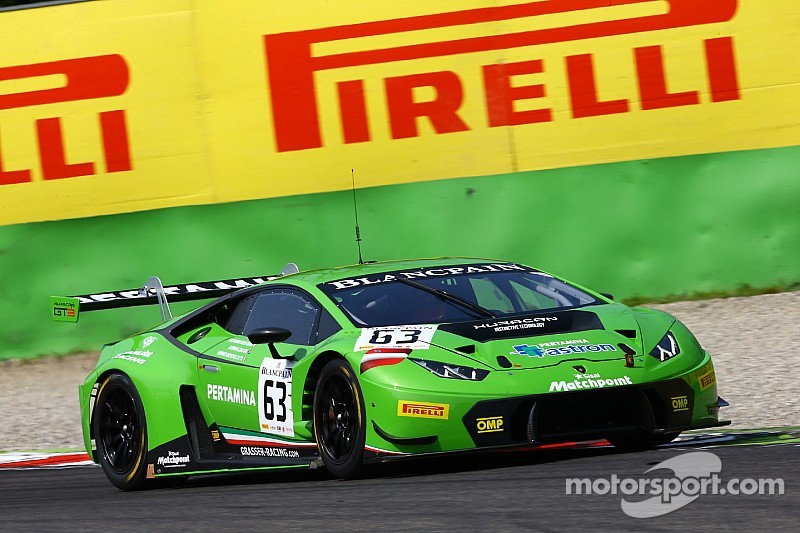 The stewards deemed the refueling restrictor to be in breach of the regulations.

The #333 Rinaldi Racing Ferrari, with Norbert Siedler and Rinat Salikhov at the wheel, started from pole and was never out of the top three, eventually crossing the line in second and winning the Pro-Am Cup. Third to take the finish flag was the #1 Belgian Audi Club Team WRT Audi which climbed from fifth to the podium in the final 30 minutes, with reigning Blancpain Endurance Series champion Laurens Vanthoor at the wheel. The Am Cup was won by the #111 Kessel Racing Ferrari of Stephen Earle, Marco Zanuttini and Monza-rookie Liam Talbot.

With 58 cars taking the start of the first round the 2015 Blancpain Endurance Series, the Monza race was always going to be a spectacular affair. Amazingly everybody got through the first chicane without any major damage, so all teams could immediately focus on the task at hand.

The Lamborghini Huracan dominated the Pro Cup rankings from the start

The new GRT Grasser Racing Team Lamborghini Huracan of Fabio Babini dominated the Pro Cup rankings from the start, helped by the fact that the Italian had managed to put a few Pro-Am cars in between his green machine and the next Pro Cup contenders. In an uneventful first stint Babini took the overall lead of the race, giving the car to young American Andrew Palmer, after which Jeroen Mul completed the race.

With the Lamborghini out of reach, Laurens Vanthoor focussed on claiming the best result possible. The reigning champion started the final stint in sixth position overall after Jean-Karl Vernay and Robin Frijns – making his GT racing debut – had kept the nose of the #1 Belgian Audi Club Team WRT R8 clean during the opening two stints. Vanthoor had the #7 M-Sport Bentley behind him however, but when Steven Kane was spun round after a contact with another car, Vanthoor could focus on gaining as many overall places as possible. He eventually crossed the line in third and sixteen seconds ahead of the Bentley Boys and a lap ahead of the new #2 Audi Sport Team WRT R8 LMS, driven by Stephane Ortelli, Frank Stippler and Nico Müller. Still an impressive maiden race for a brand-new car that had never previously raced in the Blancpain Endurance Series.

Ferrari dominance in the Pro-Am Cup and Am Cup

The Pro-Am Cup was dominated by Ferrari, with two cars on the front row. Pierre Kaffer quickly took the lead away from polesitter Rinat Salikhov, but a different strategy including an early first pitstop made the #66 Black Pearl Racing by Rinaldi Ferrari fall down the order rather soon. Salikhov managed to hold on to the Pro-Am Cup lead, a position that was consolidated when Norbert Siedler completed the middle stint. In the final part of the race Salikhov and the #333 Rinaldi Racing Ferrari came under pressure from Alessandro Bonacini in the #11 Kessel Racing Ferrari, but when the Italian – sharing the car with Michal Broniszewski and Michael Lyons – had to cope with an overheating engine, his laptimes went up and he dropped to third in Pro-Am Cup. The #51 AF Corse Ferrari of Matt Griffin and Duncan Cameron, which had started as seventh of the Pro-Am Cup cars, therefore completed an impeccable race as second in Pro-Am.

In the Am Cup Liam Talbot had put the #111 Kessel Racing Ferrari on pole, but in the opening stint team-mate Stephen Earle played the sensible card and thus managed to avoid getting into trouble. When Marco Zanuttini took over the car, the red machine climbed up the order to first place again. Australian Liam Talbot, the man who had travelled the farthest to make his debut in Monza, again showed his speed in the final stint and took an emotional Ferrari-win in the Italian temple of speed.

Laurens Vanthoor (#1 Belgian Audi Club Team WRT): “Even without the safety car intervention I think I could have gained some places in the final stint. This podium finish is a good way to start my title defence. If we can manage to be consistent, to finish on the podium every time, we should be able to have a shot at the title. Finally, I would like to dedicate this podium finish to our mechanics. After our mishap in Nogaro they had to build a new car from the ground up and as you can see by the result, they did a fantastic job.”

Guy Smith (#7 M-Sport Bentley): “Because of the nature of the first corner and the run-up to it, Monza is probably one of the more difficult circuits to take a start. Once we managed to get through without any incidents, it was all about managing the gap towards the car behind us. We are not the fastest car around, but by maintaining a steady rhythm, we managed to gain some places.”

Rinat Salikhov (#333 Rinaldi Racing Ferrari): “There is always some luck involved in racing, and when we managed to kept the lead in the second stint, we started to believe we might get a good overall result as well. I pushed hard in the final stint and thanks to the good work of the team we got this great result.”

Liam Talbot (#111 Kessel Racing Ferrari): “It was really worthwhile to travel from Australia to Monza. I still think I am dreaming. To get a win in my first race in Monza, with a Ferrari, is just unbelievable. The team and my team-mates did an incredible job. I will be back in the Blancpain Endurance Series!”