Silverstone, now Paul Ricard. What is next for Bentley.

After winning the Silverstone round of the Blancpain Endurance Series, the #7 M-Sport Bentley also claimed victory in the third round of the Series at Le Castellet. At the end of the three-hour evening race, Guy Smith, Andy Meyrick and Steven Kane had a mere 1.1 seconds advantage over the #98 ART Grand Prix McLaren of Parente-Demoustier-Lapierre. The Bentley trio now lead the Pro Cup driver standings as well. The battle for third was decided after a frantic fratricidal battle between the two HTP Motorsport Mercedes. Eventually it was the #85 machine of Wolf-Afanasiev-Dusseldorp that ended up on the podium. The Pro-Am Cup was won by the #12 TDS Racing BMW of Catsburg and Hassid, while the #458 GT Corse by Rinaldi Ferrari of Schmickler, Matschull and Ehret took its third win in as many races in the Gentlemen Trophy.

The three-hour race at Le Castellet started with a shock. The #99 ART Grand Prix McLaren, championship leader in the Pro Cup driver standings, had to retire on the opening lap with suspension damage. Kevin Estre, who started from the back after the team had to change the engine after qualifying, had tried to make up positions as quickly as possible, but was involved in an incident with the #14 Emil Frey Racing Jaguar. Meanwhile, their ART GP team-mate Alvaro Parente was leading the race. The Portuguese driver had taken its second pole position of the season, and once the lights went out he disappeared into the distance. Just before the driver change, the gap to Guy Smith in the #7 M-Sport Bentley, who was lying second after overtaking the #35 Nissan GT Academy Team RJN Nissan of Japanese youngster Katsumasa Chiyo, was just over nine seconds. 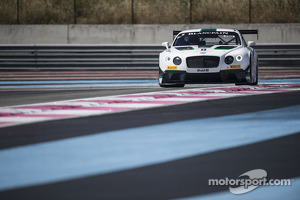 However, during the middle stint of the race, that lead disappeared quickly. Just minutes after Jérôme D'Ambrosio had to park the #8 M-Sport Bentley behind the wall with suspected transmission damage, Andy Meyrick took the lead of the race away from Greg Demoustier. At the end of the second stint, the gap between the sole remaining Bentley and the ART McLaren had grown to almost nine seconds. A slight problem at the front left wheel during the Bentley pitstop erased that advantage, and Steven Kane only just managed to hold on to the lead after Series newcomer Nicolas Lapierre had taken over the wheel of the #98 ART Grand Prix McLaren. The gap between the two fluctuated, depending on which driver hit traffic, but with fifteen minutes to go, it was back down to one single second. Nevertheless, Steven Kane managed to hold on to a slender lead, and crossed the line in first, handing the Bentley crew a second consecutive win and the lead in the Pro Cup standings.

The fight for third turned out to be even closer, when Nico Verdonck and Sergei Afanasiev hurtled both HTP Motorsport Mercedes nose to tail around the Circuit Paul Ricard. The difference between the two machines during the final hour of racing was never bigger than one second. The Belgian looked set to take the third podium step, but in the penultimate lap Sergei Afanasiev managed to overtake Verdonck and crossed the line less than a second in front of Verdonck.

The win in the Pro-Am Cup went to the pairing Nick Catsburg-Henry Hassid. Catsburg, who had qualified the #12 TDS Racing BMW third on the grid, made up a lot of places during the middle stint, passing the car to Hassid when in fourth overall. Despite being under pressure from Francesco Castellacci in the #90 Scuderia Villorba Corse Ferrari, Hassid managed to hold on to the first place in Pro-Am. Because the Series Pro-Am leaders, the #43 ROAL Motorsport BMW, hit trouble, the Villorba Corsa trio of Castellacci-Rizzoli-Gai now lead the Pro-Am driver standings.

In the Gentlemen Trophy Alexander Matschull and Frank Schmickler again dominated proceedings. Joined by Pierre Ehret, who skipped the Silverstone round, the drivers of the #458 GT Corse by Rinaldi Ferrari took the lead of the category just before halfway through and never looked back.