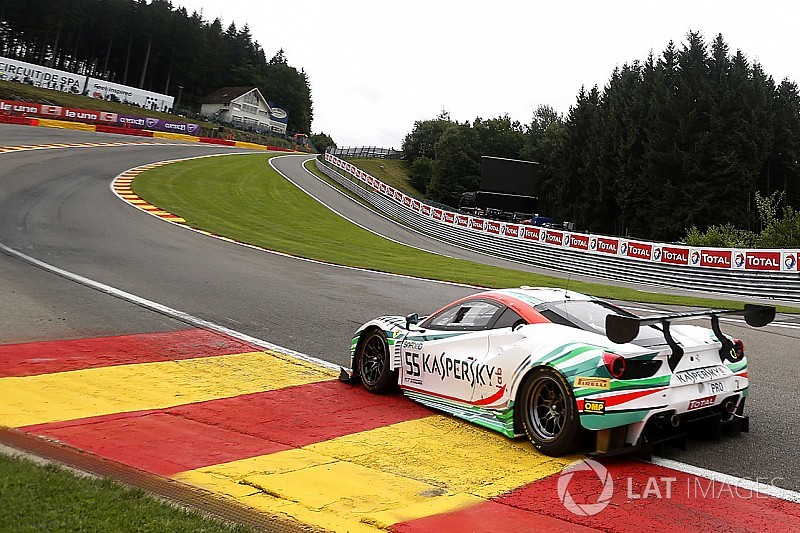 The Briton jumped to the top spot in the times on his second lap in the 'superpole' qualifying session aboard the AF Corse-run Kaspersky Motorsport Ferrari 488 GT3.

His time of 2m17.390s gave him to the pole by just under six hundredths of a second from Lamborghini driver Mirko Bortolotti.

"With all the fantastic drivers in this series, it is great to come out on top."

Bortolotti's 2m17.447s in the best of the Grasser Racing Team Lamborghini Huracan GT3s was good enough for a front row spot.

He ended up two tenths clear of the 2m17.630s set by Frederic Vervisch in the fastest of the Belgian WRT team's pair of Audi R8 LMS factory entries.

Laurens Vanthoor and Jonny Adam ended up on the same time of 2m17.674s in their respective entries from the Team 75 Porsche squad and the TF Sport Aston Martin team.

Adam was the only driver for the pro-am class to make it through to the 'superpole' session, so was already assured of the point for pole position in the TF Aston Martin V12 Vantage.

Rene Rast completed the top six in the second of the WRT factory cars on a 2m17.726s.

Franck Perera was the top Mercedes driver in seventh in his factory HTP Motorsport car. Philipp Eng took 11th for the Rowe Racing BMW squad, which won the 24 Hours at Spa last year.

The double-points round of the BGTS starts at 4:30pm local time tomorrow.