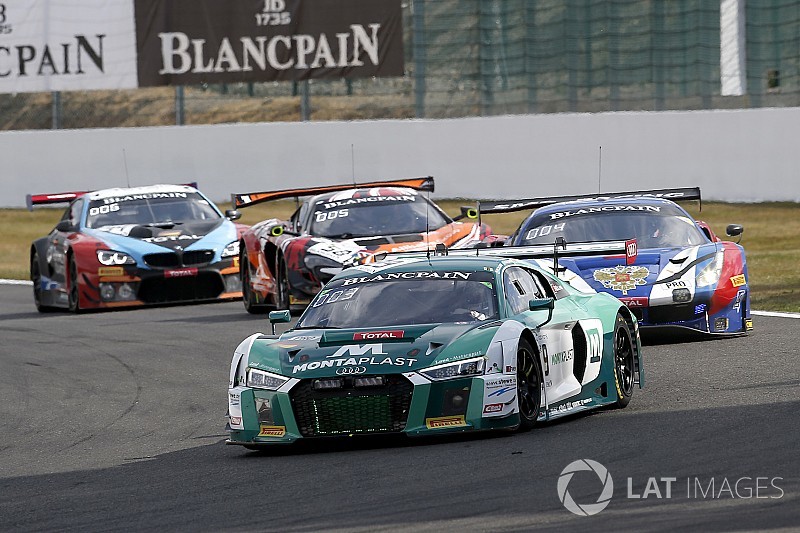 Audi leads the Spa 24 Hours after six hours, despite its R8 LMS cars receiving a Balance of Performance hit ahead of the race.

The Land Motorsport Audi driven by brothers Kelvin and Sheldon van der Linde and Jeffrey Schmidt held a lead of 25 seconds at one-quarter distance of the Blancpain GT Series Endurance Cup’s blue-riband round.

The car was able to move into the lead in the sixth hour after losing time in the second hour, in spite of the 15kg addition to the Audi's minimum weight in the hours leading up to the start of the race.

The Land Audi made up time when it took one of its joker pitstops — a stop shorter than the 1m52s minimum — in hour three and then moved to the front of the field when it stopped under a full course yellow early in the sixth hour.

Kelvin van der Linde was five seconds up when the race went green and was able to extend his advantage to approaching half a minute.

Collard was being chased by Andy Soucek in the factory Bentley Continental GT3 that had led prior to the full course yellow, which turned into a brief safety-car period.

Soucek, who shares the Bentley with Maxime Soulet and Vincent Abril, had pitted just before the race went yellow, which meant he was leapfrogged by the Audi, the BMW and the pro-am class Strakka Mercedes-AMG GT3 driven by David Fumanelli, Lewis Williamson, Chris Buncombe and Nick Leventis.

The best-placed of the factory Audis, the #2 WRT entry driven by Rene Rast, Robin Frijns and Nico Muller, was sixth.

The R-Motorsport Aston Martin team led early on with the V12 Vantage shared by Maxime Martin, Dominik Baumann and Marvin Kirchhofer. The car, jointly run by the British Arden and Jota squads, moved into the lead early in the second hour and remained on top until a refuelling problem just before the end of the third hour.

It was down in 14th position on six hours after also losing more time with a puncture.

The pole-winning WRT Audi that lost its qualifying times and was given a three-minute stop go for a technical infringement was just outside the top 20 in the hands of Dries Vanthoor, Christopher Mies and Alex Riberas.