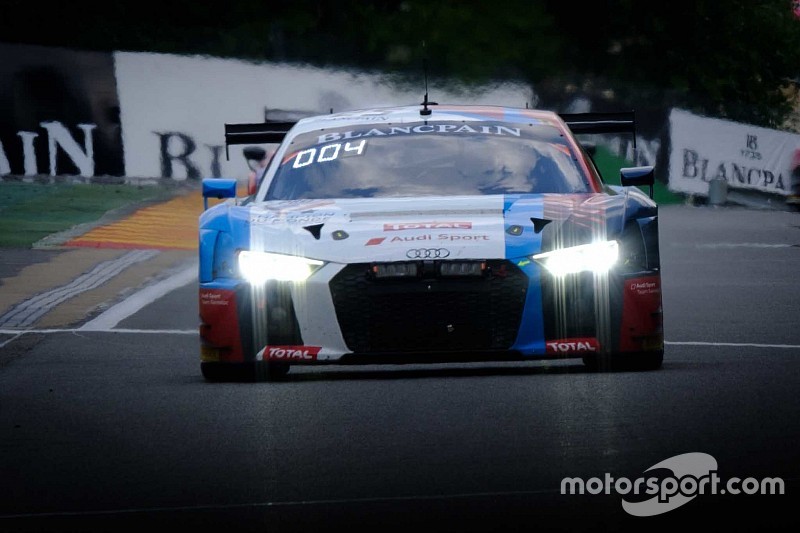 Vervisch ducked into the pits in the French team's R8 LMS as the blue-riband round of the Blancpain GT Series Endurance Cup hit the 18-hour mark.

The Belgian was just over 40 seconds in front of the Walkenhorst BMW M6 GT3 driven by Philipp Eng, Tom Blomqvist and Christiann Krognes as he headed into the pitlane.

The #7 M-Sport Bentley Continental GT3 of Steven Kane, Jules Gounon and Jordan Pepper ran fourth on the hour, despite starting from the pitlane.

The Walkenhorst BMW, the Land Audi and the Bentley were out of synch on pitstops with the fifth-placed #99 Rowe Racing BMW driven by Alexander Sims, Nicky Catsburg and Jens Klingmann and the following factory Black Falcon Mercedes-AMG GT3 of Yelmer Buurman, Maro Engel and Luca Stolz.

Stolz had just overtaken Vervisch in the Sainteloc Audi for second when it stopped together with the Rowe car.

The top three established themselves at the top of the leaderboard during a protracted yellow-flag period in the 14th hour for barrier repairs.

Each of the factory-backed teams brought their lead car into the pits to begin their technical pitstop before the full course yellow was called after Jules Szymkowiak crashed his Auto Sport Promotion Mercedes.

This was crucial because the sporting regulations do not allow cars to enter the pits to make their mandatory five-minute stop, which must be taken between the start of the 12th hour and the end of the 15th, under a full course yellow or when the safety car is on track.

But because they were already in the pits they were able to take the stops entirely under yellow-flag conditions.

The second factory Bentley of Andy Soucek, Maxime Soulet and Vincent Abril, which led at six-hours, had just come out of the pits after undergoing lengthy repairs to the front left corner.

Soucek was an incident victim of an incident at Stavelot involving Laurens Vanthoor in the Team75 Bernhard Porsche 911 GT3-R and a Silver Cup class entry from the Aust Audi team.

Earlier the car had dropped out of contention when Soucek came together with Am-class Rinaldi Ferrari and sustained steering damage in the eighth hour.

Vanthoor, who shares the Porsche with team owner Timo Bernhard and Earl Bamber had been running just outside the top six at the time of the accident.

The two R-Motorsport Aston Martin V12 Vantages fell out of contention after both requiring two changes of pads and discs, as well as suffering multiple punctures.

The race was red-flagged for approximately 90 minutes leading up to the halfway mark after an incident involving Andy Meyrick in the #31 Parker Bentley and Jurgen Krebs in the #666 Attempto Lamborghini at Eau Rouge.

Both drivers have suffered fractures, but a statement from race promoter the Stephane Ratel Organisation said that their injuries were not life-threatening.