Weekend starts on Wednesday, with a glamorous parade through the streets of Spa.

The 66th edition of the Total 24 Hours of Spa, jewel in the crown of the Blancpain Endurance Series, will be held from July 23rd to July 27th. Two months before the entry deadline, it is already clear that the event fully deserves its status as one of the highlights on the international racing calendar. Apart from the teams and drivers competing in the full Blancpain Endurance Series, there will be additional first-class entries going for the win, which will bring the total number of cars on the grid to at least 63, with good prospects of increasing that number. The extensive support race programme will be the ideal appetizer for the greatest GT spectacle in the world.

Saturday July 26th should be marked with a big red cross on your calendar. On that day the 66th edition of the Total 24 Hours of Spa will get underway. Exactly 90 years after the first edition the biggest race exclusively reserved for GT cars can again boast a large entry list. Not only will the 40 regular entries of the Blancpain Endurance Series be at the start in the Ardennes, some of the teams will line up some additional cars as well.

Among them will be the Belgian Audi Club Team WRT. Next to their three cars regularly competing in the whole of the Series, there will be a fourth Audi R8 LMS ultra, in the capable hands of André Lotterer, Marcel Fässler and Benoit Tréluyer. The trio will be driving together for the first time in an R8 LMS ultra, but have been competing in sports car races for Audi since 2010, winning the 24 Hours of Le Mans in 2011 and 2012. 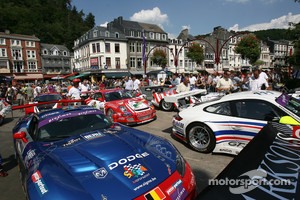 It is clear that last year’s winner HTP Motorsport will have its hands full in defending its title, but by fielding two Mercedes SLS AMG GT3 cars, the chances of the German squad doing so are far from slim.

Another contender for the win might be Blancpain Endurance Series newcomer M-Sport Bentley. It will be the first time since 1948 – when Ian Metcalfe and F1 driver Lance Macklin entered their Barnato-Hassan Bentley Special – that the prestigious British brand will be at the start of the Spa endurance classic. In 2014 Bentley has again a former F1 driver in its ranks and Jérôme D'Ambrosio is determined to do well, especially since it has been almost three years since he last drove in front of his home crowd.

Another crowd favourite will be the reigning Blancpain Endurance Series champions, the Marc VDS Racing Team. The Belgian team will enter two BMW Z4 GT3, driven by a number of BMW factory drivers. And not only the teams of the Pro category believe in strength in numbers: Italian squad AF Corse has entered no less than six Ferrari 458 Italia GT3 cars, four in the Pro-Am category and two in the Gentlemen Trophy.

No fewer than 20 nationalities will be represented in Spa, and the prize for the team having to travel the furthest to arrive in the Belgian Ardennes will certainly go to Lago Racing of Australia. The All-Australian quartet has chosen a Lamborghini Gallardo LP560-4 as their weapon of choice.

These are only a few of the extra teams and drivers expected to participate in the Total 24 Hours of Spa, which have boosted the starting grid to at least 63 cars, with good prospects of increasing that number. There will be plenty of opportunities to see these cars in action before the race starts on the Saturday. The racing week starts on Wednesday, with the famous parade, which will see the cars drive from the circuit to Spa town centre. It will be followed by a lengthy autograph session, an excellent opportunity to admire cars and drivers from up close. On Thursday the action starts in earnest, with two qualifying sessions during the evening. On Friday afternoon the starting grid will be determined, when the 20 fastest cars and drivers will try to outperform each other during the Superpole. 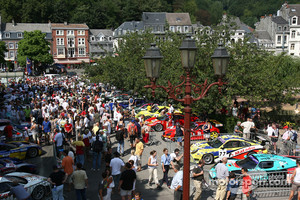 The GT3 cars of the Blancpain Endurance Series are far from the only racing machines roaring around one of the most beautiful tracks in the world during the last weekend of July. Once again the programme of support races is finger-licking good, with no less than nine race starts scheduled.

Everybody wants to be part of Belgium’s most popular motorsports event and that certainly goes for the Belgian Racing Car Championship. Together with the GT4 European Series and the GT’s and touring cars of the German RCN Challenge the Audi, Corvette, Ferrari, Lamborghini and Porsches from Belgium’s national championship will fight a tight battle during one 90 minute and one 60 minute race. Their starting grids should include over 80 cars of all varieties.

In short, the 90th anniversary edition of the Total 24 Hours of Spa will be one to remember for years to come.

Montermini, Salaquarda back in the Blancpain Sprint Series at Brands