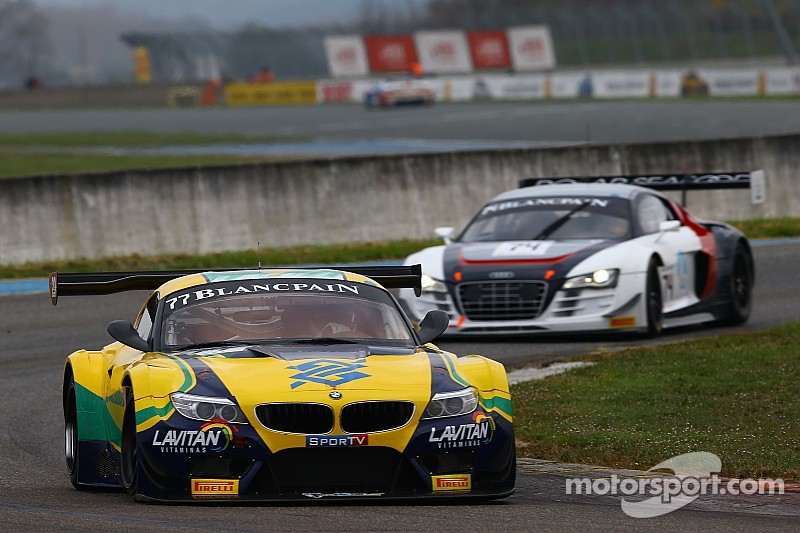 The scene is set for what promises to be an exciting weekend of top-notch racing.

The circuit of Brands Hatch is ready to host the third round of the 2015 Blancpain GT Series, the second Sprint Series event. With Norbert Siedler emerging as the unexpected leader in the drivers standings and title contenders Laurens Vanthoor and Robin Frijns not scoring in the opening round in Nogaro, the scene is set for what promises to be an exciting weekend of top-notch racing.

Last year saw the return of international, high-level GT racing to Brands Hatch for the first time in almost twenty years. The Blancpain Sprint Series event was a popular success and all of the teams and drivers are looking forward to racing at the Kent circuit again. With Maxime Martin and Dirk Müller giving the BMW Sports Trophy Team Brasil their maiden win in Nogaro during the Easter weekend, the Brazilian squad travels to Kent in high spirits. For the British round, their regular driver pairings of Bueno-Jimenez and Brito-Abreu will be back at the wheel of the yellow Z4’s. With last year’s podium finishes in mind, the all-Brazilian crew will be aiming to repeat their choice performance from France.

After what happened in Nogaro, our season really starts in Brands Hatch.

Competition will be fierce, as always. Two cars might get some more attention, though. The green Ferrari of Rinaldi Racing, shared by Blancpain GT Series leader Norbert Siedler and Marco Seefried, showed to be very competitive during the Nogaro race and the opening round of the Blancpain Endurance Series in Monza. A podium finish should be on the cards for Brands Hatch as well.

A top-three position is what reigning Blancpain GT Series champion Laurens Vanthoor will be aiming for as well. Together with new team-mate Robin Frijns, the Belgian was unable to compete during the opening sprint round, after a crash during free practice destroyed the #1 Audi. To be able to stay in the title hunt, the Belgian-Dutch pairing needs big points from Brands Hatch.

The numerous British fans will certainly have plenty to cheer for. Had both Bentley Continental GT3’s of Bentley Team HTP not been involved in the crash during the opening lap of the Nogaro Qualifying Race, the points tally of the team would have certainly been higher. Keep an eye on Lombard and Szymkowiak at the wheel of the #83 Continental for the top position in the Silver Cup as well, because the French-Dutch duo will certainly want to beat the Fjordbach twins, who drove their #74 ISR Audi to victory in France.

There are plenty of British drivers aiming to shine in front of their home crowd as well. With Craig Dolby and Sean Walkinshaw at the wheel, the #73 MRS GT Racing Nissan should enjoy plenty of local support, as will certainly be the case for James Nash (#4 Audi) and Rob Bell (#55 McLaren) as well.

But the most British entry of them all, the Triple Eight Racing BMW with Joe Osborne and Lee Mowle at the wheel, could get the loudest of cheers. The British GT-frontrunners will certainly make use of their knowledge of the 3.219 km long Grand Prix-circuit to take a shot at the win in the Pro-Am category. In the same class quick Estonian Marko Asmer – unable to compete in Nogaro due to other obligations – will take the place of Christophe Bouchut in the #71 GT Russian Team SLS, the car which took the class win in the opening round.

With eight different prestigious car brands on the grid there should be no lack of excitement during the Brands Hatch weekend. The Blancpain GT Series action starts with Free Practice 1 on 9.25am on Saturday May 9th, with a second Free Practice (11.55) and the Qualifying Session (17.30) later that day. The Qualifying Race (11.10) and Main Race (15.25) will be held on Sunday May 10th.

Sean Walkinshaw (#73 MRS GT Racing Nissan): “I’m really enjoying being part of the Blancpain GT Series, it’s a fantastic series. There’s obviously still a lot for me to learn, but the guys at MRS GT-Racing have been great and my team-mate Craig has really helped me to make the transition from single-seaters. The opening weekend didn’t go as planned, but our Nissan GT-R was quick. We all know much, much more is possible at Brands Hatch. The circuit is mainly medium to high speed, so it should suit our car.”

Robin Frijns (#1 Belgian Audi Club Team WRT): “Brands Hatch is completely new to me. Not even as a spectator have I visited the track, but I am looking forward to racing on the circuit. After what happened in Nogaro, our season really starts in Brands Hatch. Obviously we would like to win the race. We know we have a good car, and it’s important to score as many points as possible.”

Blancpain debut for Fjordbach in Nogaro