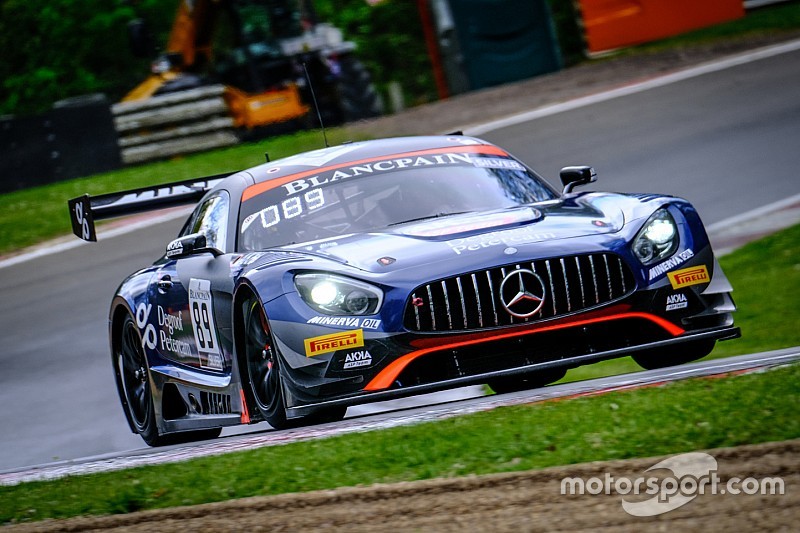 Silver Cup competitors Nico Bastian and Thomas Neubauer took a sensational Blancpain World Challenge Europe win in the Brands Hatch season-opener in their Akka ASP Mercedes, having seized the lead during the pitstops.

Reigning Silver Cup champion Bastian ran a close third early on in his #89 Mercedes, behind poleman and reigning Endurance Cup champion Luca Stolz, who led from the off in his Black Flacon Mercedes, and second-placed Mirko Bortolotti in the Grasser Racing Lamborghini Huracan.

But the AKKA ASP Mercedes leapfrogged them both with a brilliant 43.2s stop, the fastest of the race at that point. This left Neubauer in the lead, which he kept under pressure despite his lack of experience in this category.

The second-placed Black Falcon Merc, which Maro Engel took over for the second stint, closed in on Neubauer’s tail with 15 minutes of the hour-long race remaining, but was not able to get in a position to pass. Neubauer then edged clear in the final minutes to win by 2s.

The Lamborghini in third, which was crashed by Bortolotti in yesterday’s qualifying, fell away in the second stint in Christian Engelhart’s hands. It finished in that place, 10s shy of the winner.

The Pro-Am Cup class was won by Rinaldi Racing’s Rinat Salikhov and David Perel in a Ferrari 488.

Several Audis were impeded by a multi-car first turn clash on lap 1. Attempto Racing’s Steijn Schothorst in the #55 R8 and Phoenix Racing’s Kim-Luis Schramm in the #5 R8 became beached in the Paddock Hill Bend gravel. Sainteloc Racing’s Steven Palette in the #26 R8 also retired in the pits at the end of the first lap with frontal damage while his team-mate Simon Gachet in its #25 R8 LMS and WRT’s #1 R8 Ezequiel Perez Companc dropped to the back.

Orange1 FFF Racing’s Andrea Caldarelli in the #563 Lamborghini Huracan, running in fifth, got a one-minute stop-go penalty for causing the incident, having made contact with Schothorst’s R8. The penalty in effect cost Caldarelli a lap and he quit shortly afterwards to save tyres for the next race. Perez Companc later got a drive-through penalty for lap time improvements under yellow, as did Gachet and Akka ASP’s #90 Mercedes Timur Bogulavski.