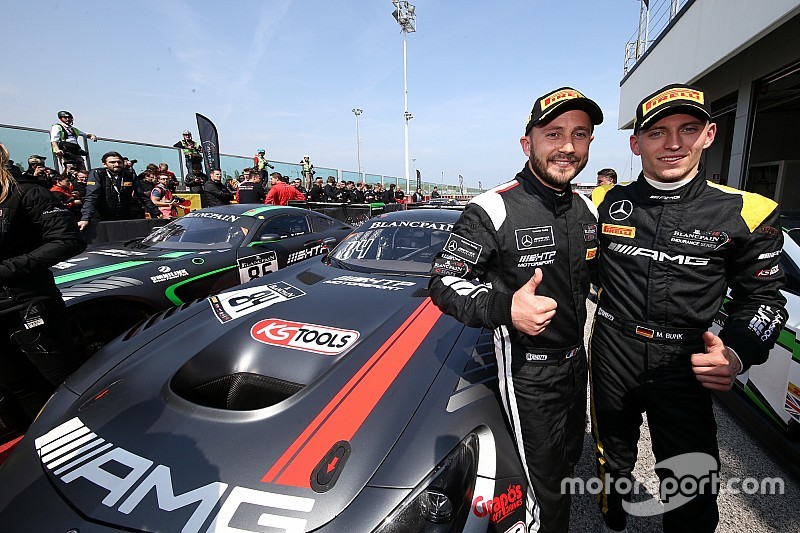 The HTP Mercedes duo were not the first to cross the line, failing to overcome a stunning defensive drive from Ezequiel Perez Companc, but a penalty for the Grasser Lamborghini handed Perera and Buhk the win.

For large portions of the race, it looked as though the in-form pair of Dries Vanthoor and Marcel Fassler would take a comfortable victory to seize the points lead.

But the race would turn on its head thanks to rapid mandatory pitstops from several crews.

While Vanthoor pitted instantly within the pitstop window, the Grasser Lamborghini of Andrea Caldarelli ran four laps longer and allowed Perez Companc to come out narrowly ahead of Fassler.

While the Audi driver looked marginally quicker, Perez Companc’s defense then created a four-way battle for the win, allowing the points leading pair to seize their chance.

Buhk had started the race in fourth, but a rapid stop allowed it to claw back several seconds on the race leader as Perera joined the fray.

The Audi/Lamborghini battle then gave the platform for Perera to seize the chance to pass Fassler for second and hound Perez Companc.

But the battling had allowed the Bentley of Maxime Soulet to seize an opportunity to further demote Fassler and he soon dispatched Perera too.

Perez Companc then made a mistake heading into the Coca-Cola chicane and a defence deemed too robust on Soulet incurred a one-second penalty.

With Soulet caught out by Perez Companc’s move, it handed the win to the HTP Mercedes crew and boost its chances of the title in Sunday's final race of the season.

The penalty relegated Perez Companc and teammate Caldarelli to second, while Soulet could only finish fourth behind Fassler.

Fifth went the way of Will Stevens and Markus Winkelhock, as the WRT Audi duo recovered from 20th in two strong stints, finishing ahead of the sister #17 car of Robin Frijns and Stuart Leonard.