Finally ! A home win for Laurens Vanthoor and Robin Frijns in Zolder 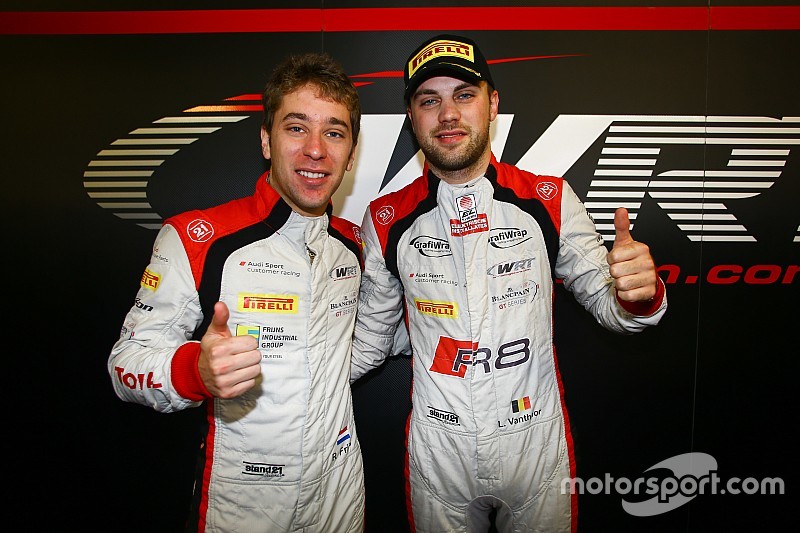 At their home track, the Belgian-Dutch duo dominated the race from start to finish.

Blancpain Sprint Series leaders Laurens Vanthoor and Robin Frijns took their second consecutive main race win of the 2015 season in Zolder. At their home track, the Belgian-Dutch duo dominated the race from start to finish, after their rivals made rather a mess of the first corner. Contact between the #84 Bentley Team HTP Continental and the #333 Rinaldi Racing Ferrari meant retirement for the Ferrari, and with the #2 Belgian Audi Club Team WRT incurring a penalty for jumping the start Frijns and Vanthoor were never really under threat.

Maxi Buhk and Vincent Abril in the #84 Bentley claimed second at the finish, with Atila Abreu and Valdeno Brito getting another podium finish in the #77 BMW Sports Trophy Team Brasil car. Rookie Tom Dillmann and Jules Szymkowiak claimed top spot in the Silver Cup in the #83 Bentley Team HTP machine. Bernd Schneider and Alexey Karachev did the same in the Pro-Am Cup, at the wheel of the first of the two GT Russian Team Mercedes.

This win is the result of a combination of good people in the team.

It was one of Laurens Vanthoor's big goals for the season: to win his home race in Zolder. During the two previous editions of the Sprint Series on the Belgian track, the man who lives just on the outside of turn 3 was beaten twice, but only just. The 2015 edition proved to be third time lucky.

Together with team-mate Robin Frijns,Vanthoor dominated the Belgian round of the Blancpain Sprint Series, claiming pole position, taking the win in the qualifying race and crossing the line in first in the main race as well. During Sunday's race none of the other drivers were capable to threaten Frijns and Vanthoor. At the pitstop, the gap to the second placed car was already well over ten seconds, and Vanthoor controlled that lead during the second half of the race to take a second consecutive main race win in 2015.

Second position was at stake during an early duel between Atila Abreu in the #0 BMW Sports Trophy Team car and the #2 Belgian Audi Club Team WRT of Christopher Mies, but shortly after claiming the runner-up spot, the German was penalised with a drive-through for jumping the start.

That meant that Abreu now had to deal with the #84 Bentley Team HTP Continental in order to hold on to second, but a problem with the safety belts during the driver change meant that teammate Valdeno Brito left pitlane a couple of seconds behind the Bentley, now with Maxi Buhk at the wheel. The gap would remain largely unchanged until the end of the race.

Sergio Jimenez and Cacà Bueno completed a fine weekend for the Brazilian BMW team by finishing in fourth position, while Phoenix Racing drivers Markus Winkelhock and Niki Mayr-Melnhof confirmed their good performance of the qualifying race by claiming fifth.

Just like during Saturday's race GT rookies Tom Dillmann and Jules Szymkowiak ruled in the Silver Cup, climbing up to sixth overall as well, adding to the joy in the Bentley Team HTP camp. After the retirement of the #71 GT Russian Team Mercedes in the opening lap, teammates Bernd Schneider and Alexey Karachev had little trouble in holding on to top spot in Pro-Am, on a track that did not really suit their SLS GT3.

A clear lead in the Blancpain GT

With their win in Zolder, Laurens Vanthoor and Robin Frijns now enjoy a clear lead in the Blancpain GT Series driver standings, with a 44-point advantage over Belgian Audi Club Team WRT colleague Stéphane Ortelli. However, in the next round (the 1000 km endurance race at Le Castellet) Frijns and Vanthoor will be driving different cars.

Laurens Vanthoor (#1 Belgian Audi Club Team WRT Audi): "This win is the result of a combination of good people in the team. Robin and I know each other very well, and he is doing an incredible job. We managed to have a faultless weekend, and that is probably our strongest point at the moment."

Vincent Abril (#84 Bentley Team HTP Continental): "I had a really good start, so I had a run on Frijns, but then he blocked me very late. I did not like that too much, because it put me in the dust and the only way to avoid him meant having contact with the Ferrari. I am very sorry for them, this is not the way I race, but for me it was a racing incident. Afterwards, the team made a very good pitstop, which helped us a lot to claim second position in this race."

Atila Abreu (#77 BMW Sports Trophy Team Brasil BMW): "This was a really hard weekend for us. A problem in qualifying meant we could only start from 15th, but we made up a lot of places in the qualifying race. At the start of today's race, I kept clear of the Bentley and the Ferrari and stayed on the inside to climb to second, but afterwards the #2 Audi kept banging into me in trying to overtake me. Those were a very hard twenty minutes. But even though we lost a position at the pitstop due to a problem with the belt, we are very happy with this result. We are improving all the time."

Marco Seefried (#333 Rinaldi Racing Ferrari): "I felt I could not make the move on Robin in the first corner, so I wanted to slot in behind him. Then I felt a bang at the rear and I ended up in the gravel trap. I don't think I did anything wrong. This is a big shame, because we were more competitive than ever."

Tom Dillmann (#83 Bentley Team HTP Continental): "My first weekend in GT racing went really well. Jules and I had a solid weekend together and I hope I can make some more progress in future races."

Bernd Schneider (#70 GT Russian Team Mercedes): "It is a very hard to overtake in Zolder, especially in a car like ours, which must be one of the heaviest on the grid. The only way to try and overtake would involve hitting the car in front of you. In the end my brakes were completely gone, so I did make contact with the Audi in front of me, only because it was impossible to slow down quickly enough."