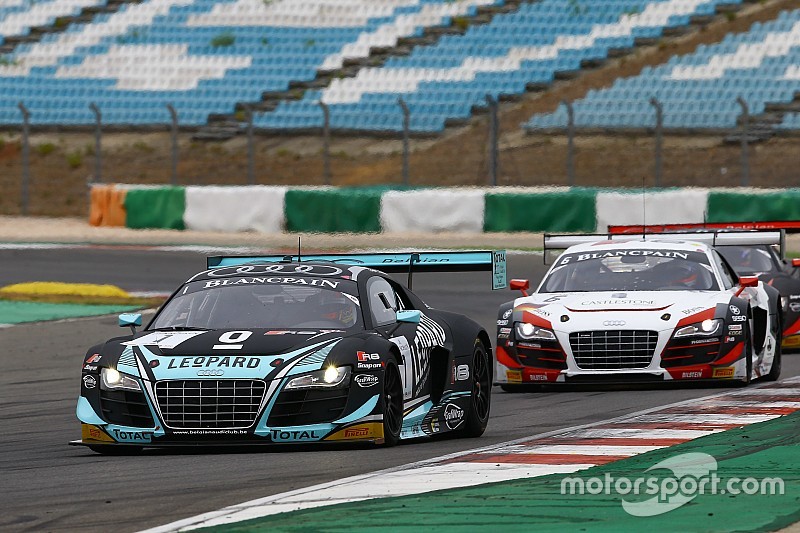 The Autodromo Internacional Algarve had donned its sunniest dress for the fifth round of the 2015 Blancpain Sprint Series.

Series leaders Laurens Vanthoor and Robin Frijns have taken the win in the Main Race of the Algarve round of the Blancpain Sprint Series. This was the Belgian-Dutch duo’s third Main Race win of the season. In second place, Markus Winkelhock and Niki Mayr-Melnhof scored their best result since the start of their collaboration in the Blancpain Sprint Series, while the #333 Rinaldi Racing Ferrari of Marco Seefried and Norbert Siedler managed to hold off the #84 Bentley Team HTP Continental to take third.

The Bentley was leading during the first half of the race, but a safety car intervention closed the field up and after a messy pitstop the Bentley dropped to fourth. In Pro-Am Cup the duel between the GT Russian Mercedes ended in favour of Marko Asmer and Alexey Vasilyev.

At the beginning of the season I tried to show Robin [Frijns] the ropes of GT racing, but this weekend he helped to improve my pace.

The Autodromo Internacional Algarve had donned its sunniest dress for the fifth round of the 2015 Blancpain Sprint Series. After the exciting finish to the Qualifying Race on Saturday expectations for Sunday's Main Race were high, and the fans were not disappointed. Right at the start Robin Frijns in the #1 Audi Sport Team WRT R8 took the lead away from polesitter Maxi Buhk, but on the long main straight the #84 Bentley Team HTP Continental managed to get into its stride and Buhk regained first position.

Behind Buhk and Frijns Niki Mayr-Melnhof in the #6 Phoenix Racing Audi and Marco Seefried in the #333 Rinaldi Racing Ferrari were hard at it as well, with Seefried eventually passing the Audi. Meanwhile Buhk managed to get away from Frijns at a rate of half a second per lap, but that advantage was reduced to nought when a loose drainage cover at the apex of turn 2 warranted an intervention of the safety car.

Just when the pit window opened the lights were switched to green, meaning that a dozen cars came into the pitlane at the same time. The crews of the #1 Belgian Audi Club and Phoenix Racing changed the tyres in record time, allowing Markus Winkelhock to come out in front of the Ferrari of Siedler. And when Maxi Buhk was slowed down at his pitstop by a BMW in trouble and Vincent Abril had some difficulties in leaving after the tyre change, the #84 Bentley lost its lead and dropped to fourth.

With Laurens Vanthoor driving a faultless second half of the race, the Belgian and his team-mate Frijns claimed a third main race win of 2015, increasing their lead in the standings to 26 points over Buhk and Abril. During the final laps of the race Abril put a lot of pressure on Siedler in the Rinaldi Ferrari, but the Austrian held on to third, which left the Bentley Boys off the podium.

A handful of seconds behind the top four was the #3 Belgian Audi Club Team WRT Audi of Stéphane Richelmi and Stéphane Ortelli. The Monegasque duo produced a magnificent result after a gearbox failure during the Qualifying had put them at the very back of the starting grid. The points for fifth allow Richelmi and Ortelli to jump up to third in the driver standings, overtaking Atila Abreu and Valdeno Brito. The Brazilian BMW crew had a miserable weekend in Portimao and left the Algarve without scoring any points.

In the Pro-Am Cup both GT Russian Mercedes were never far apart, with the #71 of Marko Asmer and Alexey Vasilyev taking the lead at the pitstop. And even Christophe Bouchut in the #70 SLS was always under the rear wing of Asmer's SLS, the Estonian ended up beating his French team-mate by less than a second.

There were no points awarded in the Silver Cup, after contact with the #0 AH Competiçoes Team Brasil BMW caused the #83 Bentley Team HTP Continental of Max Van Splunteren and Jules Szymkowiak to retire early in the race.

Laurens Vanthoor (#1 Audi Sport Team WRT Audi): "A very big part of this victory is thanks to the team. During the holidays they took the time to practice the pitstops and I don't think we can do them any quicker. At the beginning of the season I tried to show Robin the ropes of GT racing, but this weekend he helped to improve my pace. Yesterday, I was not really happy with my performance, but together we managed to improve that today."

Markus Winkelhock (#6 Phoenix Racing Audi): "Since last year everybody in the team has improved, and now we are getting the results. For us it is a lot harder to find the right set-up for the car than it is for WRT for example, since they have four cars and we only have one. The whole package - the drivers, the team, the car - is now better and I hope we can continue like this."

Marco Seefried (#333 Rinaldi Racing Ferrari): "Our car was very difficult to drive this weekend, I don't think we have ever had as many difficulties. If after free practice somebody would have said that we would finish third in the Main Race, I would have signed with both hands. The team did an excellent job working on the set-up. They turned the car inside out and upside down to find a solution, and it worked. We are now very much looking forward to the next round in Misano, in Ferrari's home country."

Marko Asmer (#71 GT Russian Team Mercedes, 1st Pro-Am Cup): "We had a great race with our team-mates in the other car after we managed to take the lead at the pitstop. Of course we would like to find some more speed so we can get a bit more to the front overall, but I am very happy with this win."