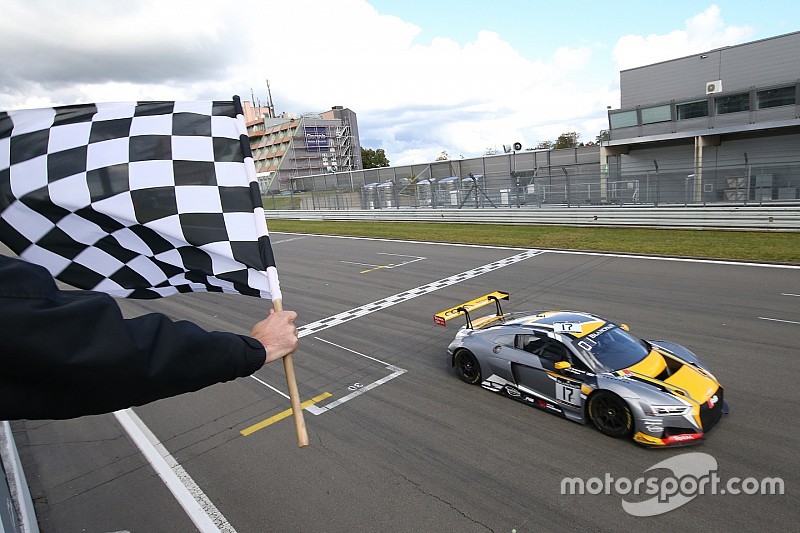 Marcel Fassler and Dries Vanthoor looked likely to sneak the title late on, having overcome polesitters and then-championship leaders Maximilian Buhk and Franck Perera in the pit window.

Starting driver Fassler had dived into the pits from second, behind Perera, the moment the window opened to hand over his Audi to Vanthoor.

Perera meanwhile ran his Mercedes for a further two laps, and a slightly pedestrian stop meant Buhk returned to the track directly behind Vanthoor.

Once the order had shaken out it was the Audi leading the Mercedes, meaning the championship point total was split equally but with Fassler and Vanthoor ahead on race wins.

But any chance of Buhk and Perera overcoming the Audi duo for the title fell away after Buhk ran wide at the final corner and into the gravel late on, picking up a puncture and retiring.

It looked as though Vanthoor would only need to cruise to the win, but he was pinged with a drive-through penalty from its pitstop because the airline hose had pulled a mechanic to the floor as the Audi accelerated away.

That meant the race leader dropped down to 10th, allowing Frijns to take the race lead and go to the forefront of the championship.

It meant two earlier crucial overtakes for Frijns, on the Lamborghini of Andrea Caldarelli and the fellow Audi of Markus Winkelhock, proved crucial in his title pursuit.

Frijns then cruised to the flag for his second victory of the season and the title with Leonard.

Winkelhock and Will Stevens again put in an impressive stint each, moving from fifth to second to complete an Audi one-two, while Caldarelli steered the Grasser Lamborghini to the final podium place.

Fourth fell to the #98 Rowe Racing BMW, with Markus Palttala working his way up the grid before handing over to teammate Jesse Krohn.

Maxime Soulet’s strong drive to second at the start went to waste with a drive-through penalty, given for running the Lamborghini of Ezequiel Perez Companc wide and off-track at the final corner, and finished 15th.