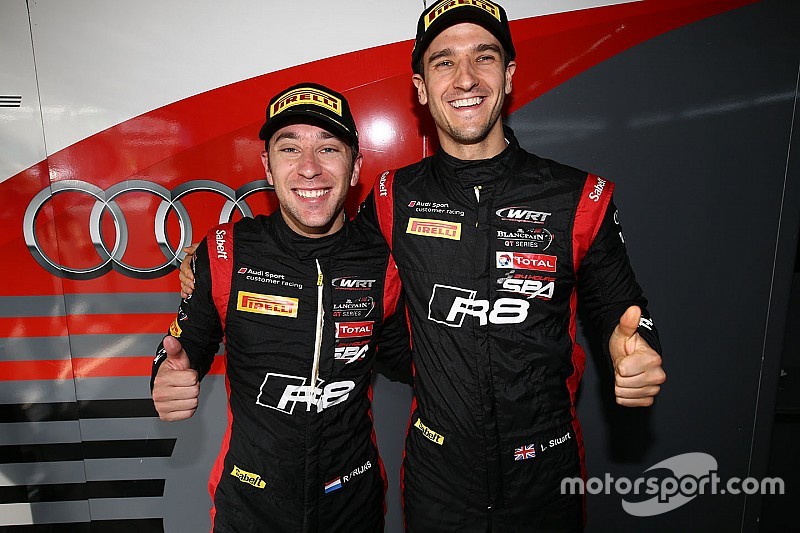 The #17 Audi Team WRT team of Robin Frijns and Stuart Leonard were victorious in the qualifying race of the Blancpain Sprint Series round at Zolder as the latter held off four rival cars during his stint.

The duo scored perennial Blancpain frontrunner team WRT its first win in the series this season.

Having topped qualifying, Frijns started the one-hour race from pole, and led throughout his entire stint, which was shortened by a 10-minute safety car phase.

The neutralisation was caused by a three-car incident at the start between Mirko Bortolotti, Come Ledogar and Frank Stippler.

The Strakka McLaren driver then spun into Bortolotti, the Italian crashing into the wall.

Both drivers retired on the spot, while Stippler pitted in at the end of the first lap, and only finished 24th.

Despite having to defend from fellow front-row starter Andrew Watson on the restart, Frijns soon pulled away from the #59 Strakka car, the Briton then soon receiving a drive-through penalty for being out of position at the start.

That put Raffaele Marciello's Akka ASP Mercedes into second, him and Frijns separated by two seconds when they both pitted on the same lap.

Their respective replacements Stuart Leonard and Michael Meadows, who were teammates in the #2 WRT Audi last year, had a similar gap between them when they started their stints.

However, the latter soon closed the gap, and also brought the #84 HTP Mercedes, #2 WRT and #75 ISR of Franck Perera, Markus Winkelhock and Clemens Schmid with him.

Yet Leonard did not crack under pressure and made it to the finish to claim his first main class Blancpain victory.

Meadows settled for second after keeping Winkelhock at bay, the German and his teammate Will Stevens taking the final podium spot after Perera was hit with a drive-through.

The penalty was given for a pitstop infringement while the Frenchman took over driving duties from Maximilian Buhk.

Winkelhock and Stevens passed Schmid and Filip Salaquarda in the pits, the latter pairing settling for fourth, closely followed by #88 Akka ASP of Felix Serralles and Daniel Juncadella, the top five separated by less than three seconds at the flag.

Sprint Cup round at Zolder: home race for the Team WRT and quite a few of its drivers