Hexis Racing: No victory in Baku but a stunning feat! 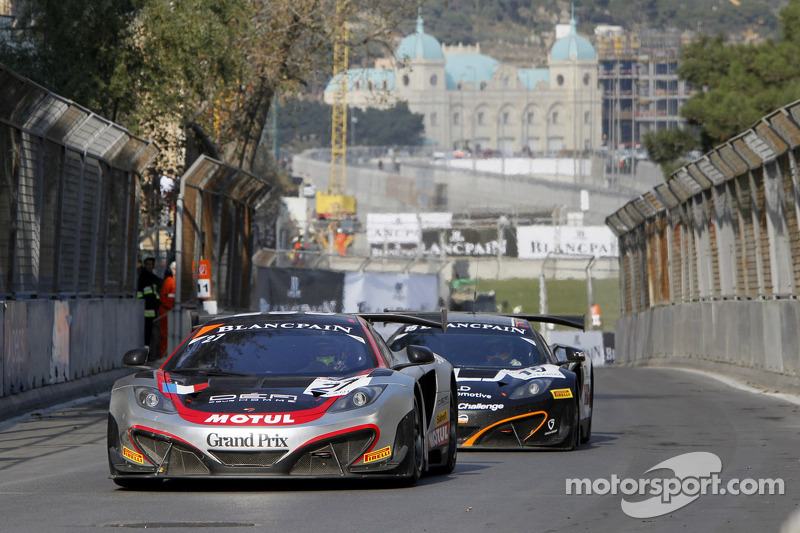 The magic of motor sport and of races in city streets all helped to rack up the tension to fever pitch!

All the right ingredients were combined to make Hexis Racing’s trip to Baku end on a high note, especially in view of the threat of the team being closed down. It achieved a major exploit in a far-off country with a dream team. The magic of motor sport and of races in city streets all helped to rack up the tension to fever pitch! Rob Bell started the main race in third place, and he was down in twenty-second spot when he was tagged in the first chicane chaos and had to pit with a puncture.

Then he hit a traffic jam at the pit entry, which cost the no. 27 McLaren another few precious seconds. Around half-an-hour later Kevin Estre crossed the line in second place only 1.3 seconds behind the winner: he finally finished third! 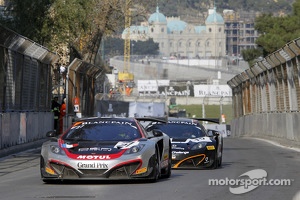 “This race was a mirror image of our team’s adventure,” said team manager Philippe Dumas after the finish. “A dash of craziness, a heap of talent, the occasional disappointment and above all, above all, we again proved that we never, ever give up! As the weekend draws to a close and after everything we’ve lived through together over all these years racing in the four corners of the world, today’s result isn’t maybe all that important. We’re still the best team and nobody should have any regrets. I’m proud of this whole adventure and also to have put my trust in an incredible driver, Kevin Estre.”

By cumulating Rob’s fifth-fastest time in the first qualifying session and Kevin’s eighth-quickest lap in the second, the Hexis Racing McLaren was in eighth place on the grid for the qualifying race. Estre did the first stint and he moved up to fifth place thanks to couple of brilliant overtaking manoeuvres.

The squad’s pit stop team again did honour to their legend beating their closest rivals by 2.384 seconds changing the wheels! Bell rejoined in third place for his stint, which was marked by a long safety car period and a red flag. The race was restarted for 15 minutes and there were no changes at the front of the field. Rob saw the flag in third place behind two Audis fighting off former Hexis Racing driver Alexander Sims in the process!

Bell also did the first stint in the main race lining up on the inside of the second row. The race got off to a chaotic start due to the very slow pace imposed by the pole sitter, Niki-Mayr-Melnhof. Rob was hemmed in behind the Austrian and he was overtaken by a host of cars, which had made a faster start, as the squabbling field roared down to the first chicane.

The Hexis Racing McLaren was tagged on both sides and the Englishman had to do three kilometers with a punctured front tyre before pitting. When he went back out Bell was only able to fight his way back from 23rd to 17th place as the safety car was again deployed after 10-minutes racing. A kerb had to be repaired and the race didn’t restart until the pit stop window opened.

Another hitch hit the French squad when Bell came in for his stop. Rob was delayed at the entrance to the pit lane by a car that had stopped. Although the team achieved another lightning turnabout when changing the wheels around 20 seconds were lost. Estre then began a series of awesome overtaking moves setting mind-boggling lap times as he fought his way up to fourth place behind yet another former Hexis driver, Alvaro Parente.

With three laps to go the Portuguese driver felt the threat looming and plunged down the inside to get past Alon Day’s Mercedes-Benz on the run into the hairpin. Kevin took the opportunity to try and slip through the tiny gap as well and rounded the hairpin between the German car and the wall. On the exit from the corner Day hit Parente’s McLaren, which slammed into the right-hand door of Kevin’s car. The French driver managed to continue at unabated speed and crossed the finishing line in an unbelievable second place!

After the race the incident between Day, Parente and Estre was investigated by the Stewards. The Mercedes-Benz driver was given a 10-second penalty for causing an avoidable accident. Kevin got the same fine for exceeding the track limits putting him back to third place.

As Philippe Dumas said above, the place on the podium was of secondary importance like the size of the cheque (25 000 euros), as the team’s performance spoke for itself. If Hexis Racing is obliged to quit the racing scene it will have done so on a high note in addition to giving a driver, who certainly has a great future ahead of him, the opportunity to display the full range of his talent!

Enzo Ide ends off the season with a nasty feeling

FIA GT: GT finale at Baku not worth the visit for Phoenix duo Ide/Winkelhock