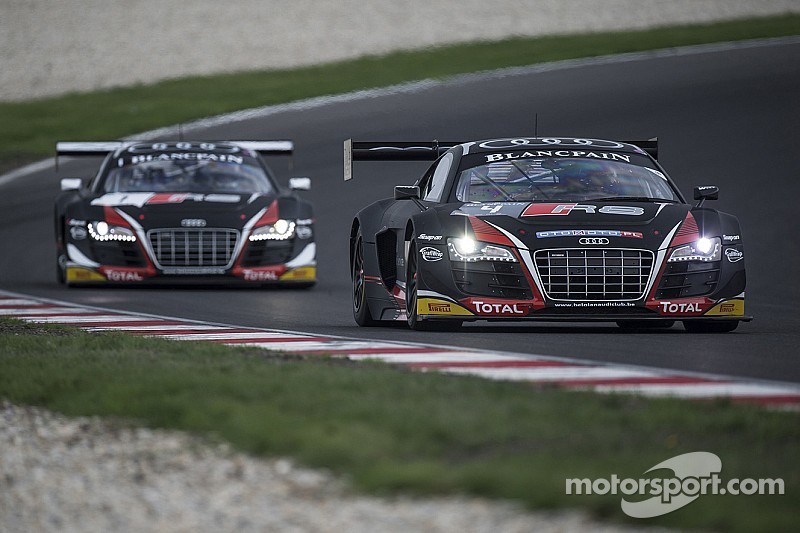 Round 6 will be raced at Zolder, Belgium on this weekend.

The penultime round of the season takes the Blancpain Sprint Series to Belgium: at Zolder, the Belgian Audi Club Team WRT will live its second ‘home race’ of the year, after the Total 24 Hours of Spa-Francorchamps, which counted for the Blancpain Endurance Series and was brilliantly won by the Belgian Audi Club. After conquering the two crowns in the Endurance championship, an achievement similar to Spa’s is what it would take to keep the Audis R8 LMS ultra in the race for the Sprint titles, with only the Baku round left after Zolder.

In the Teams’ standings, the Belgian Audi Club Team WRT is only six points away from the top, while things look much more difficult in the Drivers’ standings. Still, no war is lost before all the battles are fought and the team is determined to fight until the very end. Among the drivers, two have an additional special motivation: Laurens Vanthoor and Enzo Ide are racing at home…

It’s a little bit frustrating to find ourselves so far in the Drivers’ standings, after having been fast and at the front throughout the season.

Team Principal Vincent Vosse’s view on this coming weekend are pretty straightforward: “The Zolder round is going to be decisive, the moment of truth in the Sprint championship. So, our objective is clear: we want to win and stay in the race for the titles. We still have very good chances for the Teams’ title, while the situation in the Drivers’ one looks more compromised. But ‘mission impossible’ is not in our thoughts until the mathematics say it’s over and we have often seen things changing radically in the Sprint series.

On top, it is our home round, and for some in the team quite literally. Laurens’ bedroom is almost at turn 2! We know the circuit well, and I think we will be competitive. The first part of the track, with corners with a lot of downforce, suits well the Audis, the second part, with a lot of braking and re-acceleration, is less favourable, but I expect we will be OK. Still, Zolder is a track that remains tricky and where you pay cash any mistake, so we will have to be extremely focused. But, for sure, we will fight like devils, like Red Devils if I may say so…”

Currently lying fourth in the Drivers’ standings, but 51 points behind the leaders, Enzo Ide and Rene Rast are the best-placed WRT duos. Still, Enzo Ide remains realistic about the chances of the car #2 pair: “It is going to be very difficult”, reckons the Belgian, “also in view of the consistency shown throughout the season by the HTP drivers leading the championship, but we will do our utmost until the last word is said. Here, we have the advantage of knowing the circuit very well and of racing at home, that always gives you an extra little push. For sure, it is a circuit I like and if possible, I wouldn’t mind some rain, although the forecast doesn’t point to that direction at the moment…”

Laurens Vanthoor, the other home boy, who has grown and lives right next to the track, doesn’t say anything different. “We need to be realistic with regard to the Drivers’ championship”, says the driver of car #1, shared with César Ramos, “but we certainly have a job to finish in the Teams’ championship. It’s a little bit frustrating to find ourselves so far in the Drivers’ standings, after having been fast and at the front throughout the season. But some bad luck, race incidents and little mistakes have led us to lose many points. Still, I really want to fight for the win in my home race and we are ready to give everything.”

For the occasion, car #1 will sport a unique livery, signed by Philippe Gilais, a young Frenchman that has won the special contest organized by Grafiwrap, the graphic design company which is one of the faithful partners of Team WRT.

The Belgian Audi Club Team WRT will face this crucial round with a very strong entry. In car #4, Vincent Abril and Mateusz Lisowski, the “under 25” pair currently leading the Silver Cup, will try to further extend their advantage but not only. “I am sure”, says Vincent Vosse, “that Zolder is a circuit where our two young guns can make something big.”

Vosse is equally confident on the potential of the #9 car, where Stéphane Richelmi will partner with Stéphane Ortelli for the first time in the Sprint series, after his successful debut with Team WRT at the Nürburgring 1000: “I am sure our two Stéphanes from Monaco can have the pace to be with the frontrunners”.

The Zolder round will follow a traditional format, with the Qualifying Race kicking off on Saturday afternoon at 14:15 and the Main Race taking place Sunday at 13:45, both on a 1-hour duration length.

Title contenders will try to close the gap in Zolder

Balzan and Salaquarda back at Zolder