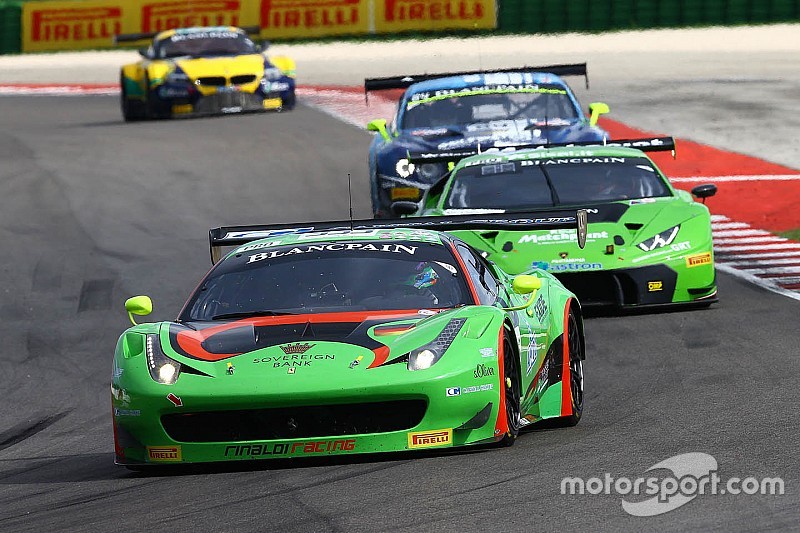 A new record for the fastest GT3 series on the planet.

No fewer than 40 powerful GT3 cars will take part in the opening round of the 2016 Blancpain GT Series, the sprint event at the Misano World Circuit Marco Simoncelli. A new record for the fastest GT3 series on the planet. Nine prestigious manufacturers will be represented by 19 teams on the starting grid. The Misano event is also the long-awaited race première for four newcomers in the Blancpain GT Series: the BMW M6 GT3, the Ferrari 488 GT3, the Mercedes-AMG GT3 and the Porsche 911 GT3 R.

The winter break is the traditional time to set new goals for the upcoming season and SRO Motorsports Group is no exception to that rule. Founder and CEO Stephane Ratel stated at the end of 2015 that there should be 25 cars on the starting grid for the sprint events for the 2016 Blancpain GT Series. An ambitious target, met with flying colours! At the Official Test Days at Circuit Paul Ricard last month it was already clear that there would be more than 30 cars for the Blancpain GT Series Sprint Cup, and the entry list for the opening round at the Misano World Circuit Marco Simoncelli has now even hit the 40-car mark.

That means that space on the 4.064 km Italian track near the Adriatic coast will be at a premium. A less than perfect Qualifying Race - just like last year, this Saturday evening joust will be held after dark - might seriously jeopardize a good result. To finish in a points-scoring position in the Main Race will not be easy if you have to start from the 15th row... or beyond.

Over a quarter of the field are Audi R8 LMS, twelve to be exact. Reigning Blancpain GT Series Teams Champion Belgian Audi Club Team WRT bring six, with an impressive driver line-up mixing former champions such as Laurens Vanthoor, Christopher Mies and Robin Frijns, along with fast newcomers such as Rodrigo Baptista, Dries Vanthoor or ex-F1-driver Will Stevens. Three other squads each enter two of the newest Audi R8: Phoenix Racing, Saintéloc Racing and ISR all have experienced drivers and hungry young wolves in their driver line-ups as well.

To counter the brand with the four rings, Lamborghini is represented by seven Huracans in GT3 version. The machine from nearby Sant'Agata Bolognese made its sprint debut in last year's Misano event, immediately claiming a podium finish. The team responsible for that feat, Austrian's Grasser Racing Team, makes its full season comeback this year by entering three cars. It once again has Jeroen Bleekemolen in its ranks, the Dutch driver who took the 2014 sprint title fight down to the wire. Other Huracans will be in the colours of Attempto Racing (three) and X-Bionic Racing Team (one).

The best-represented new-for-2016 GT3 car is the Mercedes-AMG GT3. AKKA-ASP and HTP Motorsport each bring three of the fearsome successor to the SLS GT3. The German squad took the drivers' title in last year's Sprint Cup, and has switched from Bentley to Mercedes-AMG over the course of the winter. Maxi Buhk is still with the team though, and now forms a team with his countryman Dominik Baumann. Together they won the 2012 FIA GT3 European championship. HTP Motorsport has another reigning champion in its ranks, with last year's Silver Cup winner Jules Szymkowiak now teaming up with double Total 24 Hours of Spa winner and 1997 FIA GT Champion Bernd Schneider. A combination of experience and youthful enthusiasm if ever there was one, for when Schneider took the first of his two Spa wins, the young Dutchman was not even born.

In the AKKA-ASP camp reigning FIA F3 European Champion Felix Rosenqvist will be making his GT debut in Misano. The Swede teams up with former Indy Lights champion Tristan Vautier. The French team, which switched from Ferrari to Mercedes-AMG, starts with high ambitions in the 2016 Blancpain GT Series.

There is more machinery which will make its Blancpain GT Series race debut in Misano, such as the new Ferrari 488 GT3. The most recent jewel from the Prancing Horse-workshop will be raced by Kessel Racing, AF Corse and Rinaldi Racing. The latter, still in its typical poison green livery, will again be driven by Marco Seefried and Norbert Siedler, last year's winners in Misano and one of the title candidates before the start of the final round of the 2015 season. Rinaldi and AF Corse will also enter the predecessor of the 488 GT3, the Ferrari 458 GT3 Italia. That brings the total number of Ferrari cars to five, much to the joy of the Italian racefans.

There are three new BMW M6 GT3 in Misano as well, with Rowe Racing bringing two - Total 24 Hours of Spa winner Nick Catsburg is one of their drivers - and Boutsen Ginion bringing one. The latter has Belgian ace and BMW works driver Maxime Martin at the wheel in Misano, and judging on Martin's performance in his sole sprint appearance in 2015 - together with Dirk Müller he won the opening round in Nogaro - the Blancpain GT Series Sprint Cup regulars might want to keep an eye on the Belgian.

Vincent Abril conquered last year's sprint drivers' title together with Maxi Buhk, but in contrast to his German team-mate the French youngster decided to stick with Bentley for 2016. He was promoted to a works drive at the end of last year and will be joined by fellow Bentley Boy Steven Kane on one of the two Continental GT3 entered by Bentley Team M-Sport. The other British machine is in the very capable hands of Maxime Soulet and Andy Soucek.

More experienced sprint drivers racing for a new team can be found in the McLaren camp. Garage 59 now represents the Woking brand, with two 650S GT3 on the grid. One of its cars will be driven by the only all-Platinum pairing of the impressive entry list, Brit Rob Bell and Portuguese driver Alvaro Parente sharing the #58 McLaren.

Nissan: From Endurance to Sprint

Porsche is the ninth and final manufacturer represented in the 2016 Blancpain GT Series Sprint Cup event at Misano, with the brand new 911 GT3 of Team a-workx. Sebastian Asch and Dietmar Ulrich will share the wheel of the 'Elfer' and will compete in the Pro-Am Cup, together with five other cars. The Am Cup has been introduced to the sprint categories as well, and the two Ferrari 458 Italia and single Lamborghini Huracan will certainly make it an interesting race-in-the-race.

The Silver Cup has undergone a revamp over the winter and the category is now open to any pairing of Silver drivers, irrespective of their age. Five driver pairings will compete in the Silver Cup: Stuart Leonard and Michael Meadows in a Belgian Audi Club Team WRT machine, their Audi colleagues from Phoenix Racing Markus Pommer and Nicolaj Møller Madsen, Luca Stolz and Michele Beretta will drive a Grasser Racing Lamborghini, there is another Huracan for Dutch Attempto Racing duo Jeroen Mul and Max Van Splunteren and Ricardo Sanchez and Sean Walkinshaw team up in one of the Nissan GT Academy Team RJN GT-Rs.