It was the "Maximilian show" at Nogaro with the two Mercedes teammates snagging the victory in the maiden race of the 2014 BSS season.

HTP Motorsport drivers Maximilian Buhk and Maximilian Götz took the win in the first Main Race of the 2014 Blancpain Sprint Series. With their Mercedes AMG SLS they crossed the finishing line of the Circuit Paul Armagnac in Nogaro with less than two seconds advantage over the #3 G-Drive Racing Audi driven by local favourites Stéphane Ortelli and Grégory Guilvert. Another Audi pairing, Mateusz Lisowski and Vincent Abril in the #4 Belgian Audi Club Team WRT R8 LMS ultra, claimed the third podium position during the final laps of the race, also winning the Silver Cup category.

Sunny conditions greeted the drivers on the grid for the first main race of the 2014 Blancpain Sprint Series, but during the formation lap towards the rolling start drama hit the cars on the front row, when there was contact between the #1 Belgian Audi Club Team WRT Audi of Cesar Ramos and the #6 Phoenix Racing Audi driven by Niki Mayr-Melnhof. The Brazilian driver had to bring the car back to the pitlane, only to retire with suspension damage, while the Phoenix car retired halfway through the race, when the damage at the front of the Audi proved too important to continue.

The incident during the formation lap caused some confusion during the start and Sergio Jimenez was able to take the lead in the #0 BMW Sports Trophy Team Brasil car, edging in front of the #84 HTP Motorsport Mercedes driven by Maximilian Buhk. However,it did not take the reigning Blancpain Endurance Series champion long to take the lead, and from lap four the German driver was able to edge away from the chasing pack. 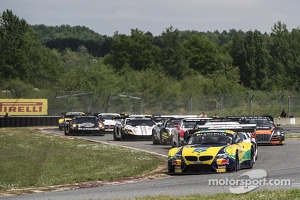 By the time Gregory Guilvert in the #3 G-Drive Racing Audi managed to overtake the Brazilian BMW, the HTP Motorsport Mercedes already had a lead of nine seconds. A fabulously quick pitstop by the G-Drive Racing mechanics – which earned them the 2.000 € cheque for winning the Pitstop Challenge – reduced the gap to only four seconds, with Stéphane Ortelli getting closer and closer to leader Maximilian Götz every lap. The German had the race under control however, and after 41 laps of the 3.636 km track he crossed the line to take the win in the first Main Race of the season.

The fight for third proved to be as exciting as the duel for first, with Cacá Bueno trying to hold off the leading Silver Cup car in the hands of Vincent Abril. When Stef Dusseldorp in the #85 HTP Motorsport Mercedes caught up with the #0 BMW SportsTrophy Team Brasil Z4 and the #4 Belgian Audi Club Team WRT Audi, it briefly looked like Bueno could take advantage of the bickering behind him to hold on to third, but three laps from the end Vincent Abril managed to pass the yellow BMW on the inside. One lap later Dusseldorp followed suit, but Abril was already too far ahead, so Dusseldorp was unable to threaten the third position of the Audi youngster. Together with his Polish team-mate Mateusz Lisowski the Frenchman was not only presented with the 10.000 € cheque for finishing third overall, but also received the 20.000 € cheque for winning the Silver Cup, therefore equalling the prize money amount won by overall race winners Götz and Buhk.

The cars that occupied the three bottom positions on the starting grid – the #28 Grasser Racing Team Lamborghini, the #21 BMW Sports Trophy Team Brasil BMW and the #2 Belgian Audi Club Team WRT Audi – looked set for a strong points finish, but Nelson Piquet jr. suffered a puncture in the final stages of the race, which left the Lamborghini and Audi in sixth and seventh. Series newcomer Giorgio Pantano scored the points for eighth in his #60 Bhaitech McLaren, followed by the #5 Phoenix Racing Audi of Basseng-Latif and another newcomer, the #90 Scuderia Villorba Corse Ferrari of Montermini and Salaquarda.

Maximilian Buhk (#84 HTP Motorsport Mercedes): “The start was quite confusing, after the incident between the two Audi cars. Once the race got underway I was able to quickly overtake the G-Drive Audi and BMW and I managed to give the car to Maxi with a healthy lead.”

Maximilian Götz (#84 HTP Motorsport Mercedes): “We knew the Audi team would perform well during the pitstop, so we decided to come in early, to give me the possibility to push on a clear track. That plan worked out well and once Stéphane was behind me, my engineer was always keeping me up-to-date on the gap and where he was quicker than me. So I pushed a bit harder in the second and third sectors, to conserve our lead.”

Grégory Guilvert (#3 G-Drive Racing Audi): “First of all, I would like to thank G-Drive Racing and Stéphane for giving me the opportunity to race here. Car racing is my passion, but on my own I would never have been able to participate in this event. After the contact during the formation lap I was convinced that there would be another formation lap, which is why I completely missed my start. The Mercedes immediately took a lead which would be impossible to bridge, even though our mechanics performed exceptionally well during the pitstop.”

Stéphane Ortelli (#3 G-Drive Racing Audi): “I feel for Laurens and Cesar, because they were a class apart during the whole Nogaro weekend. It is not the way I wanted to claim a podium finish, I would have preferred to fight with my former team-mate. But that is part of racing, and I am very proud that for the third year in a row I am on the podium of the opening round of the best GT Series in the world.”

Mateusz Lisowski (#4 Belgian Audi Club Team WRT Audi): “I would never have dreamt to be on an overall podium of the Blancpain Sprint Series. I was really surprised that I was able to fight with drivers that have more experience than me and I am already looking forward to the next round in Brands Hatch.”

Vincent Abril (#4 Belgian Audi Club Team WRT Audi): “The last few laps of the fight with Bueno were fabulous. We lacked a bit of speed on our Audi, but three laps from the end I noticed that Bueno was pumping the brakes for the braking zone at the end of the straight, so I decided to have a go on the inside. I got alongside, there was a slight contact between the cars, but I managed to overtake him. I am over the moon with this result.”