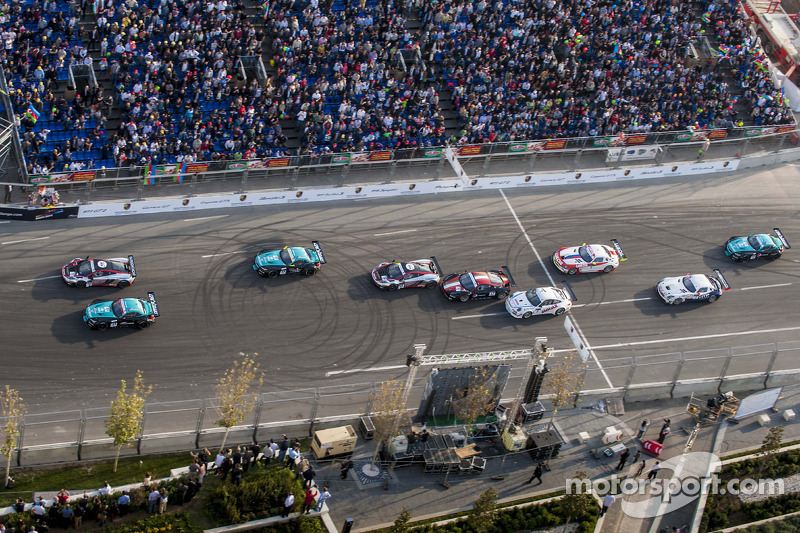 In just under one month’s time the atmospheric streets of Baku, the historic capital of Azerbaijan, will host the inaugural Baku World Challenge by Aztexnika. Today, a stellar grid of 30 FIA GT Series cars is announced, featuring some of the best teams and drivers currently competing on the international GT stage.

With 20 cars entered in the Pro category and 30 in total, the Baku World Challenge by Aztexnika will display the one of the most competitive grids seen in GT sprint racing since the first season of the FIA GT1 World Championship in 2010.

The event on 23/24 November is set to be a fitting finale to the 2013 FIA GT Series season, as both the Pro and Pro-Am titles will be fought out on the brand new and specially designed 4.38-kilometre street circuit, which will race past some of Baku’s most iconic landmarks, including the famous Crystal Hall arena.

Revealed on the entry list are a bumper 30 entries representing the three categories in the FIA GT Series: Pro, Pro-Am and Gentlemen Trophy. 19 teams representing eight nations will race an incredible variety of GT supercars. Audi, BMW, Corvette, Ferrari, Lamborghini, Mercedes, McLaren and Porsche will all be seen in action on the challenging Baku circuit next month, giving the expected large crowd a thrilling racing spectacle over two days.

Existing FIA GT Series teams and drivers are joined by an array of new entries for the season climax. An impressive 8 new-to-the-series squads are joining the prestigious Baku World Challenge next month. 2013 Blancpain Endurance Series champions, Marc VDS Racing Team, will enter one of their BMW Z4 cars for Maxime Martin (BEL) and Nick Catsburg (NDL), aiming to finish their successful season off in style.

Also from Belgium and bringing two of the spectacular McLaren MP4-12C cars to the race are the renowned Boutsen Ginion team. They have a very strong looking driver line-up, which includes McLaren factory driver Alexander Sims (GBR), Stef Dusseldorp (NDL) and Frédéric Vervisch (BEL). The team has also drafted in highly promising young driver and McLaren Formula One aspirant Stoffel Vandoorne (BEL) to join Vervisch in the #16 Boutsen Ginion McLaren.

Making a surprise but very welcome appearance in Baku will be the rumbling Corvette Z06 GT3. Run under the famous Callaway moniker, the German squad brings wonderful GT variety and also a powerful driver line up of Jeroen Bleekemolen (NDL) and Daniel Keilwitz (DEU).

If that were not enough to whet the appetite for the grand finale of the FIA GT Series season at the Baku World Challenge by Aztexnika, then the confirmation of 2011 FIA GT1 World Champions Hexis Racing on the entry list with a McLaren MP4-12C will add even more spice to this highly anticipated event.

The title battles will be intense in Baku with two of the four Belgian Audi Club Team WRT Audi R8 LMS ultra cars fighting it out to be 2013 FIA GT Series Pro champions, while the HTP Gravity Charouz team will battle, as they have done all season, with the GRT Grasser Racing squad for Pro-Am honours.

Do not miss the Baku World Challenge on 23-23 November. With a stunning setting close to the Caspian Sea and the full grid of spectacular FIA GT Series cars racing close to the famous Crystal Hall and National flag square landmarks, the 2013 season is set to come to an unforgettable climax.


“We are delighted to announce such a strong entry for the grand finale of the 2013 FIA GT Series at this very special Baku World Challenge by Aztexnika event. The additional entries that are joining the regular competitors in Azerbaijan will add much variety, colour and competition to the weekend, perfectly complementing and rewarding the hard work that everyone has put in to creating this unique racing spectacle.”


“The Azerbaijani public is going to see some wonderful supercars driven by many of the greatest GT drivers in the world next month. The Baku World Challenge by Aztexnika will be a unique event that will perfectly reflect the diversity in the competitors on the track with the cultural and geographic diversity of Azerbaijan. The entry list announced today is the perfect beginning to ensure the fixture of the Baku World Challenge becomes a permanent one in the international motor sport calendar.”