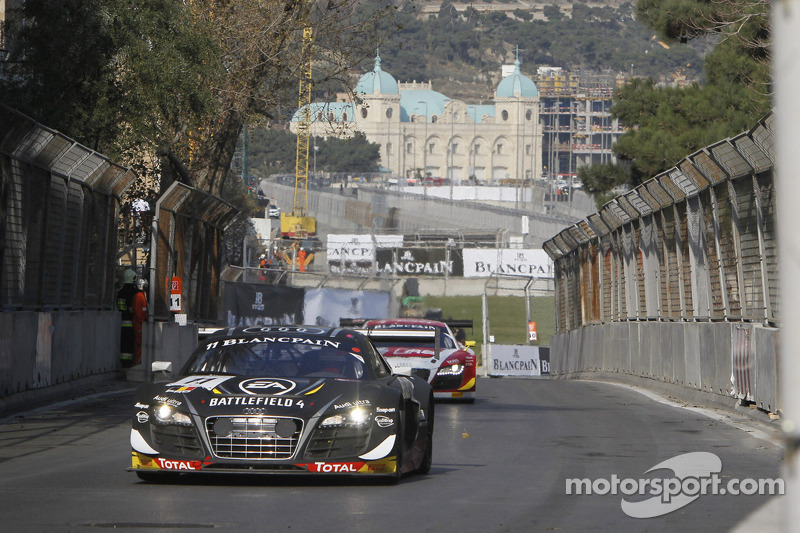 The Belgian Audi Club Team WRT will certainly remember the historical first edition of the Baku World Challenge as one of its happiest days, as the team won both races and conquered the FIA GT Series Teams’ title, while Laurens Vanthoor and Stéphane Ortelli crowned themselves Champions in the Drivers’ standings.

The Belgian and the Monegasque came to Azerbaidjan as points leaders and emerged winners of the family battle within Team WRT drivers, but they did it in style, clinching a brilliant win in the Main Race after being second in the Qualifying Race. 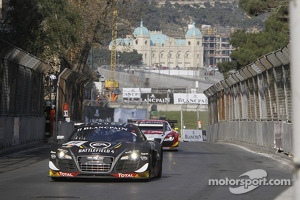 Their main contenders, Edward Sandström-Frank Stippler had a more difficult weekend after an accident in free practice influenced their entire outing. Niki Mayr-Melnhof, who still had a slim chance in the Drivers’ standings, did a fantastic Qualifying Race together with Rene Rast, taking a superb victory.

Unfortunately he was the victim of a rival in the very first corner of the decisive race. In that initial lap fell also the car of Grégoire Demoustier-Filipe Albuquerque, who already had had a complicated first race. With this great result, the Belgian Audi Club Team WRT successfully concludes the 2013 season and keeps faith to the tradition of winning at least one major international title every year.

There were tears of joy, hugs and celebrations in the Belgian Audi Club Team WRT’s box after the race and this will be only the start of a long night… Team Principal Vincent Vosse was emotional about what was happening: “What can I say? It’s just fantastic, we are very happy and I feel very proud of the entire team, of all the drivers. We really achieved something.

I had the feeling we could do well here, but a street circuit, and a new one on top, is always a tricky thing. It has not been an easy weekend, despite what you could think from the outside, and it was quite eventful. But ultimately everything went well and it’s great to finish on two wins like those. Congratulations to everybody!”

Laurens Vanthoor and Stéphane Ortelli were … trying to realize what was happening. The young Belgian, for whom this is his first international GT title admitted: “Crossing the line and winning the race and the title is a big emotion. I am happy that it’s over, because I was probably more stressed than I thought about this decisive round. Stéphane helped me a lot in trying not to take things too seriously, but still…

And this last race was just crazy, I don’t really understand what happened and was just focusing in not doing mistakes…” Ortelli, on his side, reckoned: “This is probably my nicest international title and it is so because of the family spirit that we have been able to create all together at WRT. I’m really happy for the team, and want to thank everybody, but a big special thanks go to Laurens. Without his youth and speed, I couldn’t make it…” 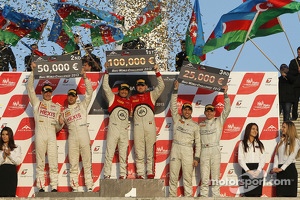 The FIA GT Series community got an incredibly warm welcome in Azerbaidjan and the new Baku urban track, which required fine-tuning until the very last minute, proved to be challenging and interesting. Free practice sessions brought their share of issues and work, with scratches and bumps for everybody.

The car of Albuquerque-Demoustier reported a broken suspension, while Edward Sandström’s had more serious damage in the front when it collided with a Corvette in one of the chicanes. “I missed the braking point, it was my fault.”

Qualifying resulted in Rene Rast taking the pole (“I like street circuits and this one is interesting, I think I could have even done better in my best lap”), with Vanthoor in 3rd, Sandström in 12th and Albuquerque in 22nd.

The Qualifying race, on Sunday morning, started one hour and half late after the track had dried from an unfortunate ‘washing’ with water by the city services during the night. In the meantime, a sanction on the second-fastest car in qualifying had promoted Vanthoor to first row. The two Audis R8 LMS kept control of the race in the initial laps, with Rast preceding Vanthoor.

The situation basically did not change after pit stops, as Niki Mayr-Melnhof produced a perfect performance. “The car was very well balanced”, commented an elated Austrian, “I think we did a good job, and I enjoyed the track very much”. Ortelli came in second, while the two other cars, stuck in the mid-grid traffic, couldn’t do much to climb positions. Sandström-Stippler still got the good points of third in the Pro category.

The Main Race, with again two WRT cars in the front row, was definitely more lively. The Mercedes of Afanasiev created chaos at the first chicane when it hit the side of Mayr-Melnhof’s car, ruining the race of #12 and creating big confusion behind, where Demoustier was one of the victims. Only Ortelli, who had taken the lead from the start, seemed free of trouble, for a short while, as he got almost stopped behind a lapped car two laps later, having to let go two of his purchasers.

A safety-car period occurred then and both Ortelli and Sandström decided to pit as it was over. “That was the right strategic decision”, explained later Ortelli. Vanthoor rejoined the race in second and in the closing laps he could pass the leading Mercedes, whose pace had slowed, while at the same time keeping at bay a charging McLaren. “I was keeping a very safe pace and was so focused in avoiding mistakes that I only realized I was in P1 when I was told by the team on the radio”, commented the Belgian Audi Club’s protege.

But it was written somewhere that this was to be his day, and everything finished well. It was not a lucky day for Sandström-Stippler, who were slowed by an unidentified technical problem, and finished 4th in the Pro points, while Rast struggled to bring home the wounded #12.

The Belgian Audi Club Team WRT can now celebrate and add the FIA GT Series titles to its string of crowns in the Blancpain Endurance Series and in the 24 Hours of Spa-Francorchamps. Time to say “We’ll be back in 2014!”

Sébastien Loeb Racing: A podium finish in Baku to end the season