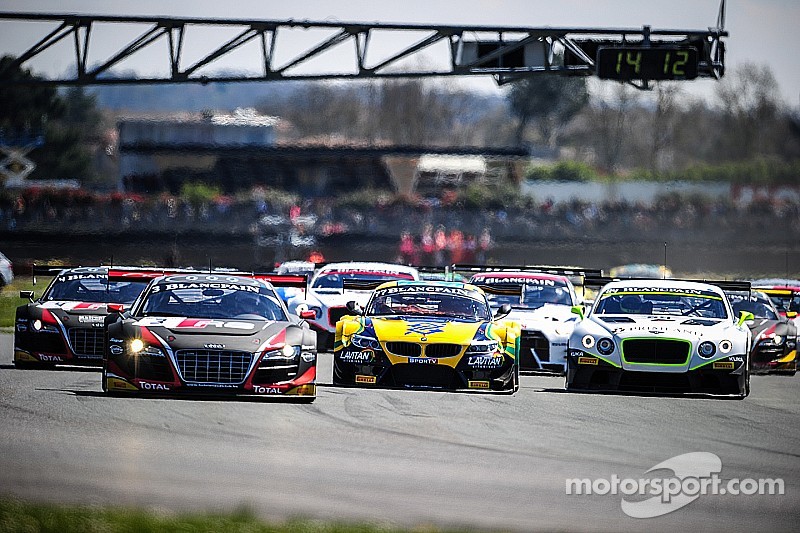 The BMW Sports Trophy Team Brazil team celebrated a hard fought victory in the main race of the Blancpain Sprint Series at Nogaro today to ensure the Caiprinhas will be flowing in France this evening.

Dirk Muller and Maxime Martin got sweet revenge on the Belgian Audi Club Team WRT Audi team who took the silverware in yesterday’s qualifying race. During an intense one-hour battle the BMW Z4 emerged victorious after a thrilling overtake for the lead to claim the maximum 25 points to come away from France with the series lead.

“We had a little issue with the ignition at the stop,” said Maxime Martin after the race. “But it was OK in the end and Dirk did a great job with the overtaking move.

"I am very happy for Antonio (team boss – Hermann) and for Brazil today.”

Unlike yesterday’s qualifying race the initial exchanges were without significant drama as the 19-car field filtered through the tight confines of the Nogaro circuit.

Belgian racer Martin wrested the lead from pole sitter Stephane Richelmi at turn four on the first lap with an incisive move on the Monegasque. The Belgian then began to build a gap slowly over the Audi R8 LMS ultra.

Richelmi soon found himself under pressure from team mate Christopher Mies in the No.2 Belgian Audi Club Team WRT Audi and he relinquished the place after ten minutes.

Mies then set about reducing the gap to Martin but the German only managed to stabilize it before the mandatory pit stop, which has to be taken between 35mins and 25mins of the one-hour race remaining.

The gap between the top two was just over four seconds as they took their stops but this was to be significantly reduced by a small ignition problem on the Team Brazil BMW Z4 at the pitstop.

Epic move by Muller for lead

Upon returning to the track Dirk Muller, who took over the cockpit from Martin, had a good advantage to the No.3 Audi, now driven by Ortelli.

Mies, who had taken over the lead, put in some stellar laps before handing over to team mate Enzo Ide. The extra quick laps from Mies paid dividends as Ide emerged in the lead with a two second lead over Dirk Muller, who had seen the initial gap over the No.2 Audi overturned by his slow pit stop.

Muller then closed down Ide rapidly before despatching the Belgian with a clinical move with   17 minutes of the race remaining.

The brilliant move from Muller came while the leading pair came upon the tardy Attempto McLaren driven by Japanese racer Yoshiharu Mori. The BMW dived for the inside at turn one as Ide was taken by surprise and forced to relinquish the lead.

The yellow BMW had to make the move as Ortelli’s third placed Audi was catching both of the top two after the pit stops. Ortelli swooped quickly on Ide and took second soon after Muller’s pass.

From there Muller controlled the pace to the chequered flag and despite Ortelli’s best efforts and last lap surge the German crossed the line 0.368s ahead, punching the air wildly as he did so.

The Rinaldi entered Ferrari 458 Italia driven by Marco Seefried and Norbert Seidler completed a fruitful weekend with a fifth placed finish to add to their fourth from yesterday’s race.

Danish brother Andres and Thomas Fjordbach claimed the Silver Cup win once again. They resisted the Szymkowiak/Lombard Bentley Continental GT3 to take control of the Silver points table after round one. Bernd Schneider and Alexei Karachev looked set to take another victory in the GT Russian Team Mercedes SLS AMG GT3 but they were denied in the closing stages.

In the first stint Schneider ran as high as second place overall during the pit stops after another faultless drive from the legendary German racer.

Karachev gave a good account of himself in his stint but was unable to fend of Frank Stippler, Filip Salaquarda and Markus Winkelhock’s Audis’ in the later stages. It appeared to be in this fight that Karachev fell further behind and in to the clutches of 1993 Le Mans 24 Hours winner Christophe Bouchut.

Sharing with Alexei Vasilyev, Bouchut showed all his old wily instincts to put a pass on the similar Mercedes SLS AMG GT3 of Karachev on his way to the class win and 9th position overall.

The second round of the Blancpain Sprint Series takes place at Brands Hatch on May 9/10.