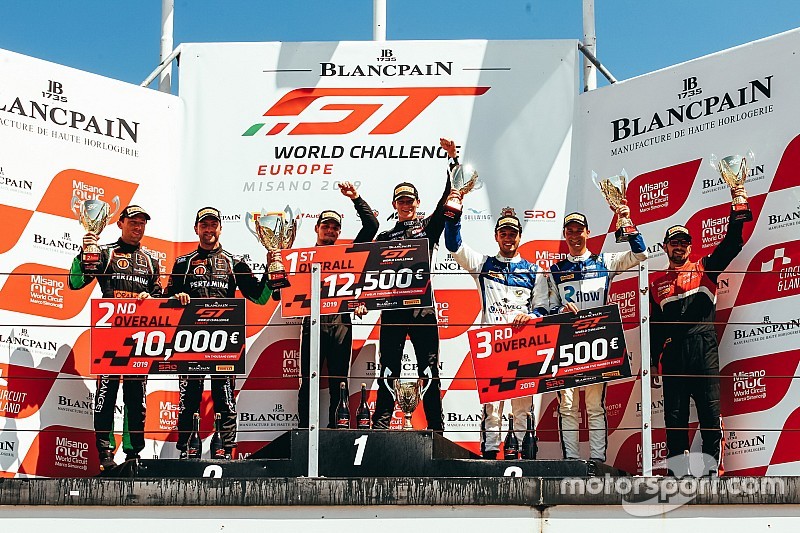 Charles Weerts and Dries Vanthoor made amends for their race one retirement by taking their first victory of the Blancpain GT World Challenge Europe season for Audi at Misano.

The Belgian pairing qualified second on the grid and held that position behind the leading AKKA ASP Mercedes-AMG GT3 of Raffaele Marciello in the opening stint.

But Marciello and teammate Vincent Abril were denied a shot at victory after a pit mix-up left them only 16th at the finish.

Race one winners Andrea Caldarelli and Marco Mapelli finished a close runner-up in their FFF Racing Lamborghini Huracan GT3 to close the deficit to Maro Engel and Luca Stolz (Black Falcon Mercedes) to just six points at the top of the standings.

Pole-sitter Marciello made the best getaway from the rolling start in the #88 Mercedes, beating the #2 Audi R8 LMS of Vanthoor into the first corner.

Engel on the other hand, went backwards from an already lowly 11th on the grid. The German was pushed onto the grass along the back-straight and slipped to 13th.

Out front, Marciello opened up a 1.5 second margin over Vanthoor ahead of the mandatory pitstops, but this was wiped out due to a full course yellow to remove an errant sausage kerb.

The safety car came in eight seconds before the pit window opened, leaving those behind the leading duo of Marciello and Vanthoor free to make their stops.

The Grasser Racing Team Lamborghini of Mirko Bortolotti was the first to dive in but a lengthy stop, and subsequent full course yellow infringement – which warranted a drive-through penalty – curtailed any victory chances for the #63 crew.

Marciello and Vanthoor made their stops a lap later, but radio problems meant his AKKA ASP crew were not ready for the #88 Mercedes.

The resulting 1m38 pitstop dropped Abril, who had taken over from Marciello at the rear of the field. Abril eventually recovered to 15th place at the end, two spots ahead of Christian Engelhart in the #63.

The key beneficiary of the AKKA ASP pit blunder was the #2 Audi. Now with Weerts at the wheel, the 18-year-old kept his nose clean for the remainder of the stint and fended off a late charge from Caldarelli in the #563 Lamborghini to become the youngest Blancpain GT winner.

Caldarelli rejoined from the pitstops in third place but had superior pace on the second-placed Sainteloc Audi of Simon Gachet and got the better of the Frenchman with nine minutes remaining.

There was some joy for AKKA ASP however, as Nico Bastian claimed Silver honours after a race-long scrap with the Team WRT Audi of Rik Breukers.

Pro-Am spoils went the way of the AF Corse Ferrari of Andrea Bertolini and Louis Machiels for the second day in a row, while Am victory was taken by another Ferrari, that of Wolfgang Triller and Florian Scholze.