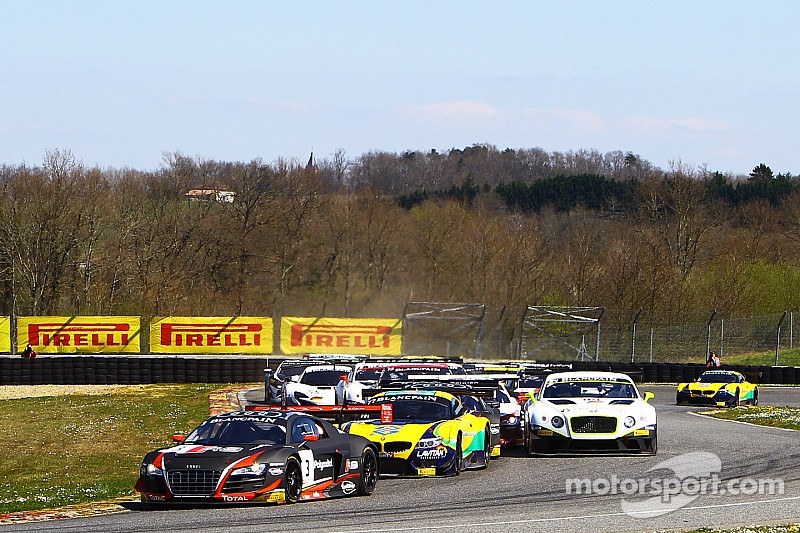 The Belgian Audi Club Team WRT Audi R8 of Stephane Ortelli and Stephane Richelmi took the first victory of the 2015 Blancpain Spring Series at Nogaro after a typically thrilling race.

Ortelli opened out an impressive nine second cushion in the first half of the event during an untroubled stint. The Audi R8 seemed to revel in the warmer conditions compared to the morning qualifying session and the multiple GT champion handed over to fellow Monegasque Stephane Richelmi, who then held off a charging Maxime Martine in the BMW Sports Trophy Team Brazil Z4.

Martin put in some mighty early laps after teammate Dirk Muller stopped early in the mid-race pit window. After Ortelli pitted the gap between the Audi and the BMW was down to just 2.6 seconds and Richelmi became a hunted man.

Richelmi’s cause was not helped when with just 18 minutes remaining of the one-hour race to run, a full course caution was deployed after Albert Von Thurn und Taxis’ Reiter Lamborghini was pitched in to a spin after contact with Rob Bell’s Attempto Racing McLaren 650S.

After the safety car returned to the pits with 13 minutes remaining of the one-hour race Richelmi defended spiritedly from Martin, who threatened throughout the remaining laps. The former GP2 race winner defended well and was able to resist the bright yellow BMW Z4, using what appeared to be superior straight-line speed of the R8. Richelmi take the chequered flag 0.052s ahead of the BMW.

“It was very good, Max (Martin) put a lot of big pressure on me at the end,” said Richelmi after the race. “Stephane (Ortelli) did a great job in the first stint. Stephane did an amazing job with Laurens a few years ago and now he is sharing with me and it is working very well between us Monegasques.”

Dirk Muller was delighted with second place in the BMW Sports Trophy Team Brazil Z4 he shared with Martin, and said: “I think I could have done two more laps for sure but we were coming up to traffic so the team did a good job on calling me in. the team is very nice and have welcomed Max and I.

"We want to get the victory tomorrow for sure” said the German, who completed his first Blancpain race.

Battle-scarred McLaren in thick of action

Rounding out the podium at was the Christopher Mies/Enzo Ide Audi. Mies overtook the Attempto McLaren with Rob Bell at the wheel with just three minutes of the race to go. Bell, driving a superb few laps after the safety car period, first overtook Mies and then picked off James Nash in the Belgian Audi Club Team WRT Audis’. These heroics were despite the McLaren missing most of its front bodywork after the first lap carnage at turn two.

However, Bell appeared to slow in the final laps to allow Mies through. At the same time, James Nash was forced to pit with a left rear puncture. The British Audi racer eventually finished a distant 11th just ahead of Bell’s ailing McLaren.

Fourth was the sole Ferrari 458 Italia of the Rinaldi team with Marco Seefried and Norbert Seidler    enjoying a trouble free race.

The race had started in spectacular fashion when Markus Winkelhock’s Phoenix Audi tagged Maxi Buhk’s Bentley at turn two and spun the Continental GT3 around. The resulting melee accounted for Winkelhock and the relatively innocent Nissan of Craig Dolby and the No.85 HTP Bentley driven by Jules Szymkowiak’s.

Buhk was able to continue and began an impressive recovery drive to hand the Bentley over to teammate Vincent Abril in 11th place. The HTP entered car eventually came home in eighth place.

The No.1 Belgian Audi Club Team WRT of Robin Frijns and Laurens Vanthoor withdrew from the race and indeed the entire weekend after chassis damage was diagnosed on the R8 LMS ultra after Frijns' qualifying accident this morning.

Danish brothers Andres and Thomas Fjordbach claimed the Silver Cup spoils after a trouble free run to maximum points after their only competitors in the class – the Szymkowiak/Lombard Bentley – retired on the first lap after being caught up in the turn two accident.

Bernd Schneider overtook Wagner in the final ten minutes to win the Pro Am class. Earlier in the race his teammate Alexei Karachev had initially held off Martin Ragginger’s Fach Auto Porsche but the 911 eventually found a way through just before the pitstops, diving down the inside of the Russian at the hairpin. Schneider, a master at GT3 racing, even picked off Marco Bonanomi’s ISR Audi on the final lap to place a remarkable fifth overall.

The result of the qualifying race will form the grid for the main race tomorrow afternoon. The one-hour event is scheduled to begin at 13.10 local time.