Muennich Motorsport takes both titles at the GT1 world championship 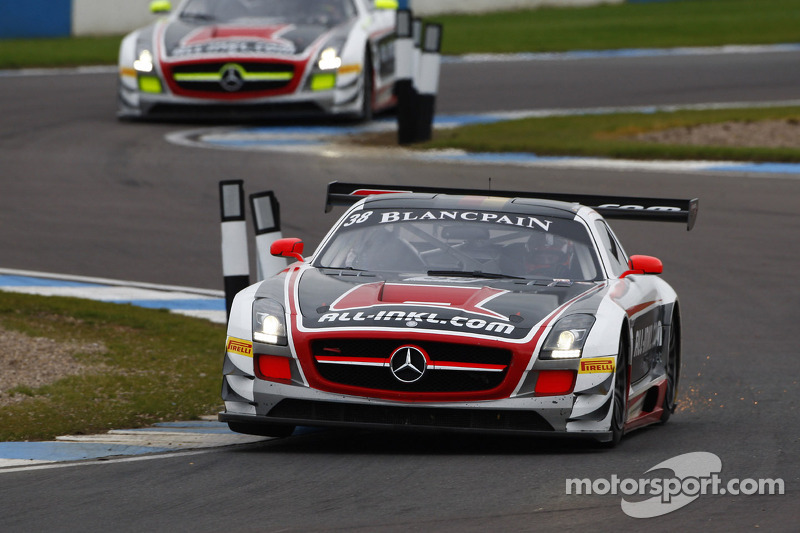 Friedersdorf/Donington (rol/ot) This is the greatest success in motor sports for the racing stable from Saxony: The German Team ALL-INKL.COM Muennich Motorsport from Friedersdorf took both championship titles at the FIA GT1 World Championship 2012 – at the team ranking as well as at the drivers ranking. 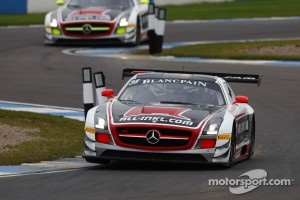 This is set now, after the furious season finale last weekend (28th to 30th of September) on the traditional race track in Donington Park (England).

Marc Basseng (Neusalza-Spremberg) and Markus Winkelhock (Berglen-Steinach) arrived on the island with their Mercedes-Benz SLS AMG GT3 (starting number 38) with one point ahead their competitors and leaved being the championship title holder of the GT1 with the same gap as well.

Their team colleagues Nicky Pastorelli (Italy/Netherlands) and Thomas Jäger (Munich) in the sister car with starting number 37 took the sixth position in the drivers ranking after all.

„This is just great. After we collapsed right before the aimed goal last year, we finally did it this time and took both titles“, René Münnich said, who is the founder, owner and team principal of the German racing stable from Friedersdorf.

„This is what the whole team – in between the helpers, mechanics, racing engineers and drivers – worked for the whole season and now they all got their deserved earnings.“

The season finale didn’t start that good at the qualifying with the places five for Pastorelli/Jäger and ten for Basseng/Winkelhock, especially because the BMW duo Michael Bartels (Germany) and Yelmer Buurman (Netherlands/#18) with just one point behind in the ranking finished on position seven.

But already at the Qualifying Race on Saturday, Basseng and Winkelhock developed their advance to Bartels/Buurman (finished on position nine without points) about three points finishing on position five ahead Pastorelli/Jäger.

Winners of the race on Saturday have been Frederic Makowiecki/Stef Dusseldorp (France/Netherlands) in the McLaren (#1) and kept their chances for the title that way.

The one hour Championship Race on Sunday was the showdown for all the drivers. At the second lap after the pit stop, Markus Winkelhock was attacked by Yelmer Buurman – they had a collision and both cars were damaged extensively and both drivers had to go to the Medical Centre for an exploration.

Winkelhock could leave it quite soon, but Buurman stayed for monitoring. „The most important thing about it is that Yelmer is alright. But I think that this accident is not only Markus fault.

The BMW behind him wanted to pass him with a vengeance and after they touched twice it came to the crash“, Marc Basseng said, who is the team manager of ALL-INKL.COM Muennich Motorsport same time.

Nevertheless, the Münnich-Mercedes #38 was disqualified after the race by the stewards and was suspended from the valuation of the Championship Race. Bartels/Buurman got an extra point on position nine.

So after all, Basseng/Winkelhock had 145 points ahead Makowiecki/Dusseldorp (144), who won the Championship Race too, and Bartels/Buurman (144). The tip of the scales for the vice title for the McLaren-Duo was one more achieved win.

The title with its large gap to the competitors in the team ranking is caused by the consistency of the whole season of the two Münnich-Mercedes. „We worked really hard on that.

Our cars haven’t always been the fastest, but we made points continuously“, Marc Basseng explained. „And a really large share goes to the whole crew, who is one of the fastest at the pit stop every time.

Teamwork helped us a lot to get both titles, which is our greatest success in motor sports at all.“