Title contenders will try to close the gap in Zolder 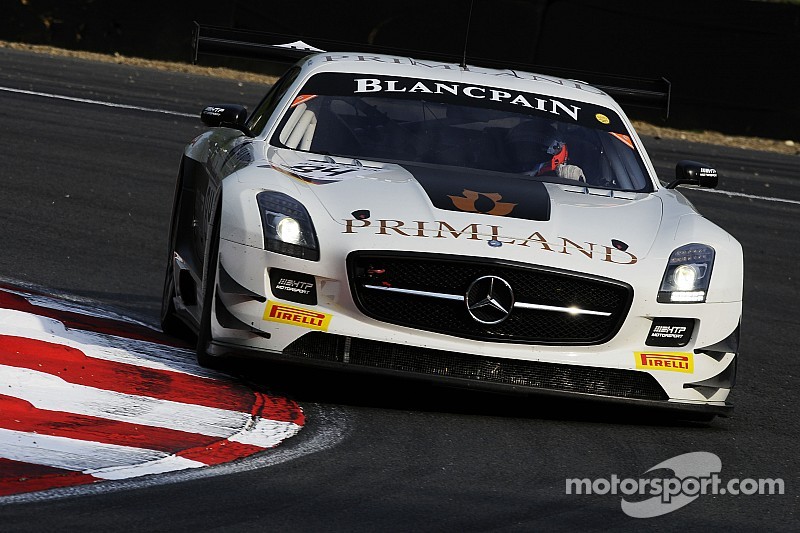 With two race weekends left, the 2014 Blancpain Sprint Series has entered the deciding phase of the season.

Before the meeting at the Belgian track of Zolder, Maximilian Götz sports a healthy advantage over his competitors, but the twisty and technical Circuit Zolder might well reduce the German’s lead.

Six weeks ago, Series’ leader Maximilian Götz was a happy man after the Portimao round of the Blancpain Sprint Series. Sharing the #84 HTP Motorsport Mercedes with team-mate Maximilian Buhk, the German driver took his second Main Race win of the season, increasing his lead over his nearest rivals – Lamborghini-duo Hari Proczyk and Jeroen Bleekemolen – to 23 points.

But Götz remained realistic, claiming that this lead would come in handy at the next round at Zolder. In theory, he feared the former Grand Prix circuit should suit the competition better than his Mercedes SLS AMG. To take the title fight through to the grand finale at the Baku World Challenge, Götz’s competitors must keep the points difference below 34. In the knowledge that last year’s Main Race at Zolder saw the only win for a Lamborghini in the 2013 FIA GT Series, the drivers of the #28 Grasser Racing Team Lamborghini are looking forward to the upcoming Belgian round. Jeroen Bleekemolen and Hari Proczyk have already taken four wins this season (three Qualifying Races and the Main Race in Brands Hatch) and would love to add at least one more to that tally.

However, Proczyk and Bleekemolen are not the only pairing aiming for a win. René Rast and Enzo Ide, in the #2 Belgian Audi Club Team WRT Audi, still have a mathematical chance of claiming the title, and the Belgian could use the home race advantage to put in an excellent performance.

The driver with biggest home advantage at Zolder is without a doubt Laurens Vanthoor. The Belgian literally lives a stone’s throw away from the track. Even though the young Belgian is out of contention in the title fight, there can be no doubt that Vanthoor and team-mate Cesar Ramos would love to get their first Main Race win of the season. Especially since the newly crowned Blancpain Endurance Series Pro Cup Champion is still in contention for the overall Blancpain GT Series title.\

In the Silver Cup, reserved for Silver drivers of 25 or younger, the win of the David Fumanelli and Stefano Colombo in Portimao considerably reduced the championship lead of Vincent Abril and Mateusz Lisowski. The drivers of the #4 Belgian Audi Club Team WRT Audi now have a mere 14 points in hand over the Italian duo from the #34 ROAL Motorsport BMW. And even though he has yet to win a race in 2014, Spanish youngster Miguel Toril is still in the running for the title as well, albeit 47 points down on the leaders.

In the Pro-Am Trophy, Alessandro Latif and Marc Basseng in the #5 Phoenix Racing Audi could take the title by finishing the Main Race. Their main competitors Stefan Landmann and Sascha Halek cannot score points in Zolder, since the latter is absent due to injury. He will be replaced by Czech driver Tomas Pivoda in the #27 Grasser Racing Team Lamborghini, which means that the Grasser Lamborghini moves out of the Pro-Am Trophy. Latif and Basseng will now have to face Series newcomers Alexey Vasiliev and Marko Asmer in the #177 GT Russian Team Mercedes for the Pro-Am Trophy honours.

The GT Russian Team is no newcomer to the Blancpain GT Series, having competed in two races in the Blancpain Endurance Series. Zolder is their Sprint Series debut however, mainly to prepare the season finale at the Baku World Challenge.

The Russian team is not the only new racing squad for Zolder. Jonny Adam and Andy Soucek will drive the #107 Beechdean AMR Aston Martin, premiering the Vantage GT3 in the Blancpain Sprint Series. The team is a regular in the Avon Tyres British GT Championship and a frequent visitor to the Blancpain Endurance Series, and, with two seasoned Pro drivers at the wheel, may well surprise the Series’ regulars.

The presence of the GT Russian Mercedes and the Beechdean AMR Aston Martin brings the total number of cars on the entry list to 23, meaning that the Zolder event sports the largest starting grid of the current season of the Blancpain Sprint Series.

Emphatic win for Götz and Buhk in Portugal