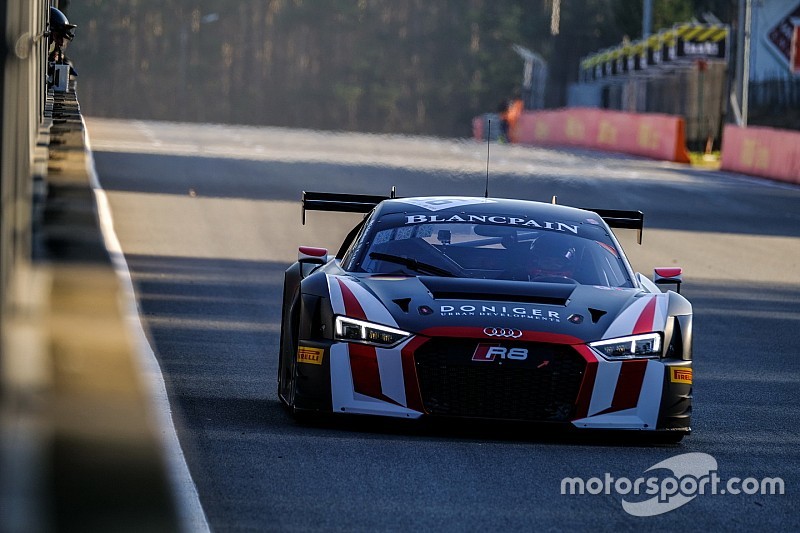 Saturday winners Christian Engelhart and Mirko Bortolotti were on pole position for Race 2, with the latter establishing a comfortable seven-second lead in the first stint.

However, when Bortolotti stopped with 34 minutes to go to hand over driving duties to Engelhart, their #63 Grasser Lamborghini stalled in the pitbox for several seconds before it finally got going again.

To make matters worse, the defending Blancpain Endurance champions were handed a drive-through penalty for infringing the pitstop procedure, dropping outside the top 10.

Grasser’s troubles gave the lead briefly to the #2 WRT Audi of Will Stevens and Dries Vanthoor, which had jumped ahead of the #66 Attempto Audi by pitting a lap earlier.

However, WRT’s lead barely lasted a few laps as the Belgian squad too was slapped with a drive-through as Vanthoor had run over a cone while exiting the pits.

As a result, van der Linde and Schothorst claimed a comfortable victory in the season opener.

The #19 Grasser Lamborghini of Ezequiel Perez Companc and Andrea Caldarelli took the final spot on the podium.

Nico Jamin and Felix Serralles were classified fourth in the second AKKA ASP Mercedes, ahead of the lead WRT Audi of Stuart Leonard and Robin Frijns.

Frijns had originally qualified on pole position for the race, but his fastest lap was deleted for exceeding the track limits, leaving him 12th on the grid.

Engelhart and Bortolotti were eventually classified eighth, while the top 10 was completed by the #35 and #90 AKKA ASP Mercedes cars - Vladimir Atoev and Alexey Korneev finishing almost seven seconds ahead of Nico Bastian and Jack Manchester.

Frijns signs up for Blancpain return alongside DTM debut