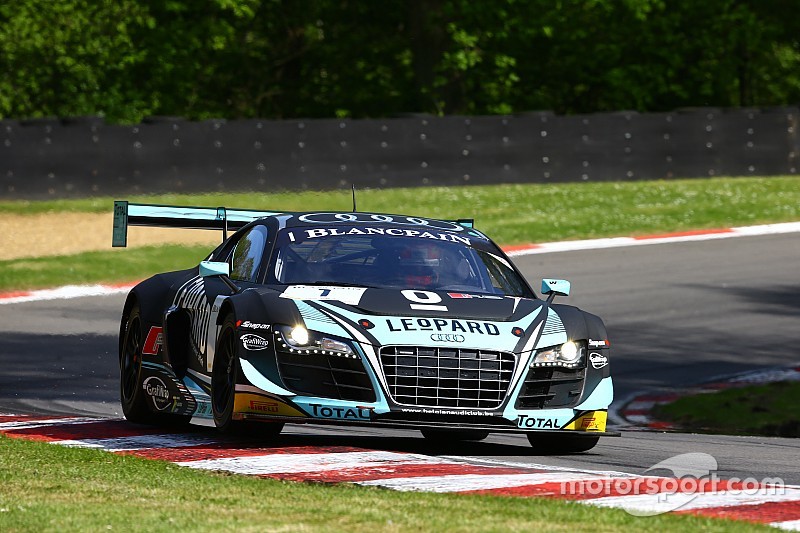 The Belgian-Dutch duo were never really threatened during a race that was marred by a four-car incident at the start.

Belgian Audi Club Team WRT-pairing Laurens Vanthoor and Robin Frijns took an emphatic win in the Qualifying Race for the Zolder round of the 2015 Blancpain Sprint Series. The Belgian-Dutch duo were never really threatened during a race that was marred by a four-car incident at the start.

The #333 Rinaldi Racing Ferrari of Norbert Siedler and Marco Seefried finished in second, followed by the #84 Bentley Team HTP Continental of Maxi Buhk and Vincent Abril. Their team-mates Tom Dillmann and Jules Szymkowiak claimed the win in Silver Cup, while Bernd Schneider and Alexey Karachev took top spot in Pro-Am for the GT Russian Team.

Tomorrow's race is not going to be easy, since the Ferrari is quicker than us at the moment.

Brilliant sunshine greeted the cars and drivers on the busy grid for the Qualifying Race in Zolder. The high temperatures would put man and machine to the test, and right from the start it was clear that the drivers would not budge an inch in their battle for position. Unfortunately, for some, this was to turn into tears. The #3 and #4 Belgian Audi Club Team WRT R8 made contact with the #55 Attempto Racing McLaren and the wall, while the spinning #4 Audi hit the #0 BMW Sports Trophy Team Brasil Z4.

The BMW Sports Trophy Team Brazil car was able to continue, but for the other three cars the race was over. For Stéphane Ortelli and Stéphane Richelmi, lying third and fourth in the driver standings, this was a blow to their title ambitions.

Meanwhile Laurens Vanthoor had little trouble in converting his pole position into a comfortable lead, and when Robin Frijns left pitlane after the driver change, the #1 Belgian Audi Club Team WRT R8 had a lead of nine seconds. The fight for second position was decided during the pitstops. Norbert Siedler had chased Maxi Buhk throughout the first part of the race, but was never able to overtake the Bentley.

In the pitstop the Rinaldi Racing mechanics were slightly quicker than those from Bentley Team HTP and Marco Seefried could leave the pitlane in front of Vincent Abril. The #333 Rinaldi Racing Ferrari showed some good speed and managed to almost halve the gap with leader Robin Frijns, which is promising for tomorrow's Main Race.

In Silver Cup polesitter Tom Dillmann barely avoided the mayhem at the start, but once the Frenchman got into his rhythm he remained faultless during the very first GT race of his career. In the second half of the race Jules Szymkowiak managed to close the gap towards the #73 MRS GT Racing Nissan of Sean Walkinshaw and the #0 BMW Sports Trophy Team Z4 of Caca Bueno, who were fighting for sixth position overall. At the finish line, the three cars were separated by only two tenths of a second.

The race for Pro-Am honours looked set turn into the favour of the #71 GT Russian Team Mercedes, with Marko Asmer gaining five places at the start and running as high as fifth overall. However, a misunderstanding during the pitstop cost him a lot of time, which handed the win to GT Russian team-mates Alexey Karachev and Bernd Schneider.

Robin Frijns (#1 Belgian Audi Club Team WRT R8): "Tomorrow's race is not going to be easy, since the Ferrari is quicker than us at the moment. If we can get through the first corner in the lead, we will work from there. It will be interesting, that's for sure."

Marco Seefried (#333 Rinaldi Racing Ferrari): "There was a point in the race where the leading Audi appeared in front of me and I could see that I was catching it, but only by a couple of tenths a lap. So I knew that I would probably not close the gap completely, but it's good to see that we again have a great race pace, like we had in Brands Hatch and Nogaro. Hopefully we can convert it into a win here."

Maxi Buhk (#84 Bentley Team HTP Continental): "I was surprised that the Ferrari kept close to me throughout the first stint. I thought it would lose ground at the end, but it didn't. We lost a position in the pitstop, but our guys still did an excellent job. The Bentley is a big car, and it's just not easy to do a quick wheel change. But the car performed well and I am pretty happy with this result."

Jules Szymkowiak (#83 Bentley Team HTP Continental): "Maybe I could have taken the Nissan and the BMW coming out of the final corner, but I did not have enough grip to do so. Still, if everything goes perfectly tomorrow, I think we can finish in the top five overall. "