Wet qualifying race at Zandvoort goes to Bleekemolen and Proczyk 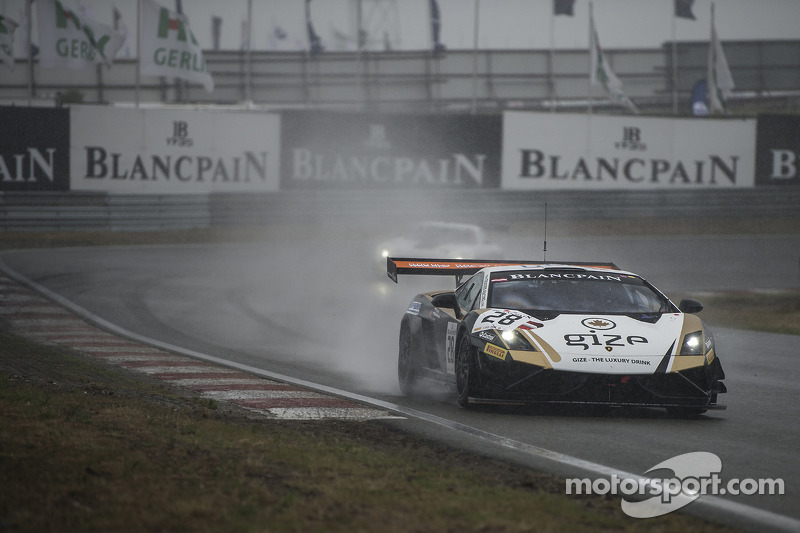 The grid for the third round of the 2014 Blancpain Sprint Series season has been set.

The Qualifying Race for the third round of the 2014 Blancpain Sprint Series at Circuit Park Zandvoort turned out to be a very wet and spectacular affair. Jeroen Bleekemolen and Hari Proczyk, with their #28 Grasser Racing Team Lamborghini, led the race from start to finish, despite twice losing the gap they had built up due to safety car interventions.

When the cars left the grid for the formation lap, all drivers had opted for slick tyres, despite some drops of rain falling on the Zandvoort asphalt. At the start polesitter Jeroen Bleekemolen managed to hold on to first place, despite Laurens Vanthoor putting the Lamborghini-driver under pressure. Peter Kox, who had started in third, made a slight mistake in the opening laps and dropped to 6th.

Bleekemolen had a hard time to open up a gap from Vanthoor, but then the rain started to grow heavier. Rivers ran across the track, but the drivers tiptoed their way around, in the knowledge that the pit window for the driver change would open five minutes later. When Marcus Winkelhock lost control of his #6 Phoenix Racing Audi and ended up in the gravel trap, the safety car intervened. Bleekemolen lost his six seconds’ lead, but kept his head cool. By slowing down considerably, he avoided having to do an extra lap in the rain and was the first car to get into pitlane when the pit window opened.

Team-mate Hari Proczyk was the first to leave the pitlane as well, but behind him everything changed. The pitstop at Belgian Audi Club Team WRT did not go as planned and Cesar Ramos, who had taken over from Laurens Vanthoor, dropped to eighth. Behind Proczyk, Maximilian Götz in the #84 HTP Motorsport Mercedes was now in second, with Stefan Rosina in the #88 Reiter Engineering Lamborghini in third. Halfway through his stint, the Slovakian driver was put under pressure by Enzo Ide in the #2 Belgian Audi Club Team WRT Audi. The Belgian did not need much time to pass Rosina, but when Filip Salaquarda tried to follow suit, his #90 Scuderia Villorba Corse Ferrari collided with Rosina’s Lamborghini. Both cars went off, causing another safety car intervention.

With two laps to go, the lights went to green again. Maxi Götz did everything he could to get his Mercedes into the lead, but Hari Proczyk made his Lamborghini the widest car on track. The Austrian managed to hold on to first place, scoring a third consecutive win. Behind Proczyk and Götz, another exciting duel had decided the last spot on the podium. Cesar Ramos concluded a brilliant drive in the wet by passing Enzo Ide on the outside of Tarzan corner.

In Silver Cup, Stefano Colombo in the #34 ROAL Motorsport BMW was the first leader, but a mistake forced the Italian to make an early pitstop. From then on the #4 Belgian Audi Club Team WRT Audi of Vincent Abril and Mateusz Lisowski controlled the race, despite making contact with the #4 Audi in the final lap.

The fight for the Pro-Am Trophy was decided in the final laps. Marc Basseng had given the #5 Phoenix Racing Audi to Alessandro Latif when leading the category and the Briton managed to hold on to that position for most of his stint. After the last restart Latif was engulfed by the cars behind him, allowing Sascha Halek in the #27 Grasser Racing Team Lamborghini to slip past and taking the win in the Pro-Am Trophy.

Jeroen Bleekemolen (#28 Grasser Racing Team Lamborghini): ‘Our car was great, both in the wet and the dry. When the first safety car came, I wasn’t sure whether we were allowed to have our pitstop under safety car. But the team quickly told that we were and then I had to slow down a lot not to be too soon at the pit entry. I noticed that Laurens behind me was doing the same, and an extra lap on slicks in the wet would have cost us a lot of time. Hari drove a brilliant stint as well, but I don’t want to live through such a close fight at the end of the race again! When you are sitting in the box, it’s very nerve wracking.’

Maximilian Götz (#84 HTP Motorsport Mercedes): ‘I had figured out that Hari was quicker in the first and last sectors, so I tried to overtake him in the second one. I took a different line and when exiting turn 10 I was beside the Lamborghini. Unfortunately, I was on the outside for the next corner, so I could not complete the pass. I did not want to take too many risks either, because I did not want to lose the front row position for the main race.’

Cesar Ramos (#1 Belgian Audi Club Team WRT Audi): ‘We have to analyze what happened at the pit stop, but it was obvious that all did not go to plan. When I rejoined I was in eighth, so I did not have much to lose. I had to give it my all and the car behaved wonderfully. After the last restart I managed to overtake Enzo for third. It’s not what we really wanted, but considering how the race went for us it is not too bad.’

Vincent Abril (#4 Belgian Audi Club Team WRT Audi, 1st Silver Cup): ‘When the rain came down, I was on slicks, so it wasn’t too easy for me. Still, we were one of the quickest cars on the track, and without the safety car intervention, we would have probably gained some more positions. The pit stop was perfect and Mateusz did an amazing job to bring the car home.’

Stefan Landmann (#27 Grasser Racing Team Lamborghini - 1st Pro-Am Trophy): ‘When the pit window opened, the team understandably wanted to focus on the pitstop for the #28 car, so I had to stay out another lap. We lost a bit of time there, but through a bit of luck at the end we managed to take the lead and win the Pro-Am Trophy.’