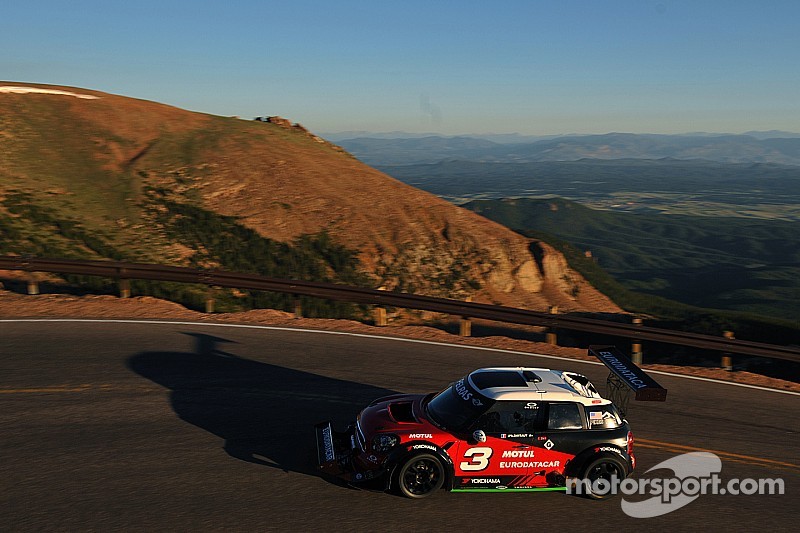 After three attempts at taming the race to the clouds, Jean-Philippe Dayraut is putting his specially prepared 900hp Mini up for sale. We took the opportunity to sit down with the French driver and chat about what it's like to take on Pikes Peak.

It’s very simple actually. To become a World Champion, you have to start early, have sponsors behind you or major means, and possess a steel mind and talent to match, as well as work like a dog. For Jean-Philippe Dayraut, it’s all there, except the major means part, a requirement for success. For the rest of it, all of the ingredients are available. Jean-Philippe Dayraut is a real racer. A relentless racer. The quiet type, but also never holds back.

The cliff on the left is terrible. If you go off there, you have no chance to come out of it alive. The corner is totally blind and you use only the horizon to orientate yourself.

The first time we met him, it was after having called him 300 times to talk about the new championship he was launching, the Mitjet, about 10 years ago. One thing was certain; the man didn’t doubt where he was going. And six years later, the Mitjet became the biggest single-make championship in the world. The series is now in its third generation of cars and attracts drivers from around the globe including Yvan Muller and Sébastien Loeb.

Loeb? Yes, Loeb…Isn’t he the one who took overall victory in 2013? But who exactly resurrected the Pikes Peak Hill Climb, made famous by the film featuring the Peugeot T16 in the 1980s but had since fell off the motor racing map? Jean-Philippe Dayraut actually. Below, he tells us about his love affair with Colorado’s famed mountain.

You have to build a car with a lot of power and always race within the limits of the driver and car.

Jean-Philippe, you are much younger than the generation of fans that dreamed of the 405 T16 at Pikes Peak. How did this adventure start for you?

"Well, it’s precisely that video of the 405 T16 at the summit of Pikes Peak. The long curves on sand and gravel – the route seemed fantastic. And, as a young boy, I told myself that one day I would do it. And generally, I get ideas that are…hard to forget (laughs)!"

The race was then pretty much forgotten about, run as a very local event for nearly 30 years.

"You’ll remember we talked about it when we were in the United States five years ago. I never forgot about it. But I want to do it right, with a chance at winning, in the right conditions and not just to participate in the event. That’s why we decided to do things big because there wasn’t anything powerful enough on the market so we had to build our own. There were cars available, like Group N and prepared cars, but nothing that could win. So, along with Tork Engineering and Richard Tur, we built a rallycross type car that handles dirt and asphalt well, with the goal to win…"

"We finished second the first year, we were leading in the second year but retired with only a kilometer to go. And the third year? Well, Peugeot and Loeb showed up! And I finished third…"

And the fourth year?

"There wasn’t a fourth year for me. Before building the car, I wasn’t aware that the mountain road would be entirely paved. It’s no longer the race of my dreams: it’s now too fast and too dangerous. Everything happens at over 200kph, on a very narrow road with steep drop-offs. I find it unreasonable…I’ll return to Colorado, which is a magical part of the world, but not to race at Pikes Peak. Before, we would use mixed tires, but now it’s soft slicks which stay glued to the road. The difference is huge."

When you arrived at the mountain for the first time, what were your impressions?

"I remember thinking this was nothing like what I saw on that Peugeot 405 T16 video. The road was a lot narrower, the holes deeper and the drops a lot more vertigo inducing, with certain parts that looked very dangerous. But it was still a dream race, nearly 20km long and absolutely unique. It’s probably that challenge that attracted me to Pikes Peak. I’m not a hill climbing specialist, but generally when I go for it, it’s because I think I can win."

You waited a while before taking on this event.

"I wanted to be sure that I had reached a sufficient level in my driving, and to have the means to fight for the win. Without that, it didn’t interest me."

"The project was born thanks to Jean-Pascal Dauce, of Dacia, who was great in this whole program. The car began as a Dacia before becoming a Mini. It’s powered by a Nissan Skyline block producing 900hp prepared by Sodemo and with a Sadev gearbox. It’s of course a 4WD and we made evolutions to the car from year to year."

The set up of the car?

"As is usually the case with these types of projects, we finished building the car very late before putting it in the airplane for Colorado. Then we shook down the car at Colorado Speedway, the NASCAR track near Pikes Peak. Then it was off to the summit."

The climb is 19.99km long and is only run it its entirety the Sunday of the race. How did you learn it?

"Well, I hadn’t done any reconnaissance beforehand, it was too late for that. So I made do with the three sector practice sessions, run three times each, and then the race. And even then, without that issue in 2012 in the last kilometer, we would have won. Nonetheless we came home with second and third place finishes. But, for sure, this Mini can win Pikes Peak."

Without previous testing, 900hp under the hood is not for everyone is it?

"Actually, yes I think so. We built a car that is easy to drive. Otherwise it’s impossible to go fast. Of course, it’s like a go-kart and accelerates faster than an F1. In fourth gear you’re already at 150kph. That says something about the gear ratios. That said, the car is easy to use. Anyone can drive it, right away. But then to take it to 100 percent, you have to learn it, etc. But truly, if someone were to buy it today, they would have every chance to shine at Pikes Peak, and even win in 2015. It’s all there and ready."

It seems so simple…

"There are all the spare parts, a new spare engine, etc. The car underwent wind-tunnel testing during its development as well. The aerodynamics are top notch and overall it’s perfect. And don’t forget that we were using commercially available Yokohama tires and not the super sticky Michelins that Peugeot were using, for example."

Speaking of Peugeot, without them you would have won in 2013.

"Probably, since we finished third behind them. But I’m not mad; I was a good sport about it. I think we were pioneers and revived interested in Pikes Peak for European competitors. And the results for our partners Motul, Mini Pelras, Eurodatacar, were exceptional."

Do you think this is what led Peugeot to take on the mountain?

"Yes, certainly. They told me in fact. Sébastien called me way before to ask what I thought of it. I told him clearly what my opinion was and that it was an awesome race. He thought about it for quite a while, watching some of my onboard videos dozens of times to learn the road. I told him to go for it. It wasn’t in my interest really, but we race to fight for the win, right?"

And the difference between the Peugeot and the Mini?

"In acceleration it’s the same for sure. But in terms of handling and tires, they put together big factory means that I didn’t have. We are about 1.5 seconds slower over one kilometer compared to Loeb’s Peugeot. It’s a gap that could be closed, with work. And of course, he’s no longer racing there, right?"

How did he prepare his race?

"A month before the race, he went to the mountain with his WRC co-driver Daniel Elena. And this time, Daniel drove while Sébastien took notes. It’s a dangerous race with drop-offs everywhere, blind curves, etc. In reality it’s terrifying."

To date, Pikes Peak is your most extreme experience?

"No, I remember this blonde Ukrainian woman…(laughs). But seriously, yes, without a doubt it’s the only place where the hair raises on the back of my neck. There is a long blind curve around the mid portion of the climb that you take at over 200kph. Every time I arrive at this corner, I get scared. The first time I went through it, I was at 80kph. I think you could probably take it at 210kph, but I could never do it and I’ll never do it. The cliff on the left is terrible. If you go off there, you have no chance to come out of it alive. The corner is totally blind and you use only the horizon to orientate yourself. On my first run through this section, Monster Tajima and his Suzuki had 12 seconds over five kilometers on me! That had never happened to me in all of my life. Then it got down to six seconds, then two, then zero in subsequent runs. But it was a shock."

What’s the secret to winning this race?

"We weren’t far from taking it. Peugeot and Sébastien had huge factory support that we didn’t have. But to answer your question, philosophically, you have to build a car with a lot of power and always race within the limits of the driver and car. If you watch the onboard cameras from Sébastien, you can see that he’s not forcing the issue and he’s not fighting the car. He’s calm. There is no wasted input and no major risks taken either. I think if putting himself in danger was a prerequisite for winning this event, he wouldn’t have taken on this adventure."

And what is the Mini doing these days?

"I decided to sell it to someone who will take on the challenge of Pikes Peak. I took my shot at it and it almost happened. The car is very capable of taking victory next year and beyond. I’m passing the torch."

How much does the car cost?