Colorado Springs, CO - With one month to go before the 91st running of the Pikes Peak International Hill Climb, there are signs that this year’s race may go down as the best in the long history of America’s second-oldest motor sports race.

The field will include 91 autos and 71 motorcycles for 162 competitors who want to challenge America’s Mountain on June 30 and its finish line at its 14,110-foot summit, where the air is rare.

The loaded Unlimited automobile division features the two drivers who took turns in breaking the all-time course record during last year’s race, French star Romain Dumas and the veteran Rhys Millen, among a field of 13 drivers with a wide variety of autos and engines.

Millen set the course record of 9:46.164 in winning the Time Attack division last year, and Dumas broke the old mark a bit earlier in the race by clocking 9:46.181 in winning the Pikes Peak Open division. Both drivers moved to Unlimited this year, setting up a classic showdown in the same field.

But that’s not all for the Unlimited field.

The veteran Doug Siddens (Cedar Park, TX), is unveiling a brand-new Polaris RZR-X soon, which he has been working on for months. Siddens is no stranger to success on the Peak, winning the Exhibition Powersport division last year in his 2009 Polaris RZR-X with a time of 10:40.669. Observers think he may be a contender this year for top honors.

Dumas, last year’s Rookie of the Year, will be joining the big cars in the Unlimited field this year with a brand-new Norma M20FCPP prototype entry in hopes of even a faster time on the asphalt 12.42 mile course to the summit of America’s Mountain.

Millen has entered in a racy Hyundai PM580T to attack the course after setting the record last year. In an interesting twist to all of this, he has loaned the auto he drove to the record last year, a Hyundai Genesis Coupe to the veteran Paul Dallenbach (Basalt, CO), who becomes one of the favorites this year in the Time Attack division.

The talent-heavy Unlimited field also includes French veteran Jean-Philippe Dayraut, driving a specially-prepared 900 HP ”No Limit” Mini Countryman for the first time on the Peak. Dayraut was third in the Unlimited division in 2011, driving a VIP Challenge Dacia Duster and winning Rookie of the Year honors.

But the new big dog in the Unlimited hunt may be another French racing star, nine-time World Rally Champion Sebastien Loeb, who will be behind the wheel of a specially-built Peugeot 208 T16 Pikes Peak model. 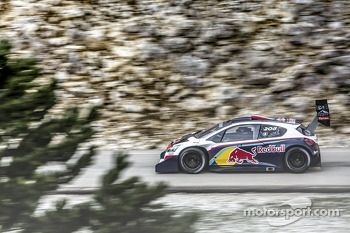 Loeb’s Peugeot entry marks its first attempt on Pikes Peak since back-to-back triumphs in its 405 T16 model in 1988 and 1989 by Ari Vatanen and Robby Unser in the Open Rally division, which now is the Unlimited division.

Driving for Citroën’s World Rally Team, Loeb won every World Rally Championship from 2004-2012 and is running in second place in this year’s series. He’s being loaned to Peugeot for Pikes Peak in an attempt to win the famed race, which began in 1916.

There is also a huge buzz in the Electric Auto division, where one of the race’s legends, Japan’s Nobuhiro “Monster” Tajima, is entered again in his Pikes Peak Special E-Runner, which caught fire last year and forced the former course record holder and the first to crack the ten-minute mark, out of the race. Tajima won the Unlimited division nine times on the Peak.

He will be up against another of the event’s legends, Rod Millen, who is the father of Rhys Millen, and winner of the Unlimited title five times in the past, as well as a comeback in 2011, when he returned to Pikes Peak and triumphed in the Time Attack 2WD division.

Millen will be driving a new Toyota TMG EV POO2 model in the Electric field, which now numbers seven entries, including one of the year’s biggest surprises.

Mitsubishi has entered six-time Pikes Peak motorcycle champion Greg Tracy in the Electric Autos Division in one of its two MiEV Evolution II four-wheel drive prototype race cars. The decorated Tracy, who has never been behind the wheel of an auto on the Peak before, was second a year ago in the blazing 1205cc motorcycle division behind champion Carlin Dunne, who set the all-time bike record of 9:52.819, while Tracy also shattered the elusive ten-minute mark with his clocking of 9:58.262.

The Electric field also includes two-time Champion Ikuo Hanawa of Japan, behind the wheel of a Summit HER-02.

The Time Attack division has a record 23 entries, including last year’s winner in the Unlimited division, David Donner of Colorado Springs. He the latest member of the famed Donner family to race on the Peak, following Robert, Robert, Jr. (David’s father), and Robert III. He has chalked up two wins in the past in the Open Wheel division on top of his 2012 crown in Unlimited. 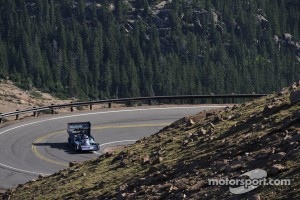 15-time Super Stock Car winner Clint Vahsholtz (Woodland Park, CO) will be back on the Peak again, but this time in the Open Wheel division, now that race organizers eliminated Super Stock from the menu of events. He’ll be driving a Ford Open in his first crack at the division in history.

Race organizers are waiting to hear about last year’s Motorcycle King of the Mountain, Carlin Dunne (Santa Barbara, CA), who rode a Ducati Multistrada to the all-time course bike mark of 9:52.819 in the Pikes Peak 1205 division. Odds are in favor of his entry at this date, but perhaps riding another model this time around.

It’s free to the public and families, and every driver and racer will be on hand with their autos and motorcycles as they go through inspection, giving fans the chance to see the vehicles and bikes and meet the competitors, who will pose for pictures and sign autographs. Race tickets and special PPIHC merchandise and apparel will be on sale at Tech Inspection at the World Arena.

More than 30,000 fans are expected to attend. This event is FREE and typically features a large Budweiser beer garden, live bands, chili cook-off for the fans.

Top race qualifiers will display their vehicles (cars, quads, motorcycles, etc.), give driver demos and be present for autograph sessions. In addition, the PPIHC mobile museum will be on-site and exclusive PPIHC merchandise will be available for purchase. Tickets to the 91st running will also be on sale.