Aircraft technology, and a Freightliner will be present at the Pike Peak Hill Climb.

The 91st Pikes Peak International Hill Climb (PPIHC), which got its start as the promotional brainchild of the developer/owner of the Broadmoor Hotel resort, has grown in stature over the years as one of the last remaining motor culture/motor racing events where people bring what they got to win fame, notoriety, and promote automotive technology solutions to the world.

The Indianapolis 500, in the majority of its history, was structured in this way but has devolved into just an endurance race with specification vehicles through the refinement of technology and safety concerns.

The pressures of this kind of human control have yet to dampen the creative spirit of the challenge of taking the 12.42 mile, 156 turn, and in its second year of having a fully-paved course that begins at 9,390 feet and ends at the 14,110-foot summit of Pikes Peak near Colorado Springs, CO.. An international field of 157 competitors, 70 automobiles and 87 motorcycles will include a purpose-built, diesel-powered, Freightliner Cascadia racing machine of Mike Ryan and engineered by Gale Banks Engineering. 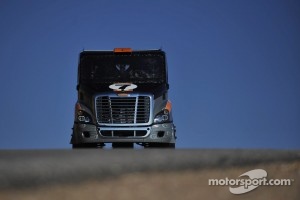 In a recent exclusive interview with Gale Banks, developer of the Straight-Shot Water-Meth (water and methanol) Injection System which is a high-tech application of a decades-old aircraft fuel technology, he exclaimed that this Water-Meth injection power enhancement to the diesel engine is addictive ... very addictive. Hence, the reference to the popular cable TV series 'Breaking Bad' where a down on his luck science teacher discovers making the drug Meth (speed) in the basement of his home allowed him to make a lot of money so he could help his family through its problems.

To have Gale explain it, when the driver, Mike Ryan, steps on the fuel pedal - "So what we've done is we've done a super-turbo set up wherein I have a very large 8.3 liter super-charger and we turn it about four-times the speed of the crankshaft, which is, the red-line on the engine is 2,700 rpm, which is high for this 14 liter Detroit Diesel (engine). Basically, what the super-charger does is it kicks the turbo-charger in the tail, makes it respond! I eliminated one turbo-charger and replaced it with the super-charger. So as you come off the turns, the idea here is, he (Mike Ryan) pedals it and it rips off the turns.

The other thing we've done with this is overlaid it with - we've created a new technology for an old technology - Water-Methanol injection ... or as the Germans called it, Methanol-Water injection.

The idea of putting methanol and water into an aircraft engine is a very old idea. So we have nominally an 80 year old idea and nobodies really refined it much beyond what we did and the Germans did in World War II (when this technology was first used aircraft). In other words, have a nozzle, turn it on ... some mechanical reference and it blows water-methanol into the intake system.

What we've done is taken to a new technological level, in that we're sensing things. Automobiles are becoming just sensors on wheels - remember that because it's going to be incredible on what's coming because of 'autonomous driving' - so, essentially, we now modulate the flow of the liquid which chills the air after its been compressed in a super-charger or a turbo-charger, makes it more dense so that every cubic foot of air that engine displaces has more oxygen and is capable of supporting more fuel. 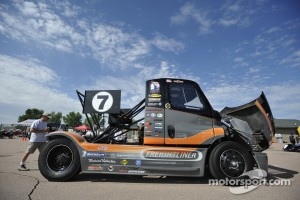 In its most elemental form this is a power improving technology - we've just mapped it like you would map the injection on an engine. We have created our own injection controller for our diesel engines, so why not do this?"

Other benefits that come through this injection technology approach are, Gale Banks continues, "We are able to reduce emissions output, we are able to improve fuel economy, we are able to - with our auto-chiller, which is the same mechanism spraying water on the face of the charge air cooler or inter-cooler - we're cooling the brake rotors by fogging into the inside of the rotor ... they're slotted, you know, they've got slots through the inside, so the thing is really a fan ... it's already pumping air to cool itself. What we're doing is adding a water mist - so we've actually got three systems on the vehicle doing three different things all based on the same technology which was originally to improve power output."

Gale mentioned that since this 5 ton (10,000 pound, plus) Freightliner platform will encounter 156 turns that these three injection systems (Water-Methanol, fog-cooling action on the brake rotors and etc.) allow Mike Ryan to "go further, at speed, before he sets up for the turn, then as he comes off of the turn, we've given him another 'bout 500 horsepower that he didn't have previously. This is like a maiden voyage with this technology."

Gale shared that, while on with Adam Corolla on his internet radio show, he came to this revelation, "This Water-Meth set-up, and the way we are controlling it, is habit forming. To me, this is (equivalent of) automotive crack. This stuff is habit forming."

It now can be said that Banks Power, Gale Banks, with Mike Ryan at The 91st Pikes Peak International Hill Climb will be ... due to this new application of injection technology - Water-Methanol fuel shot in the engine and cooling for brakes and other parts ... 'Breaking Bad' or Brakeing Bad, in a good way, on the pursuit of a new Pikes Peak climb world record.

If successful, there will be no 12-step program for the people at Banks Power ... as in, "Hello, my name is Gale Banks, and I'm addicted to Water-Meth injection!"

Mike Ryan will takie on Pikes Peak in a unique Freightliner