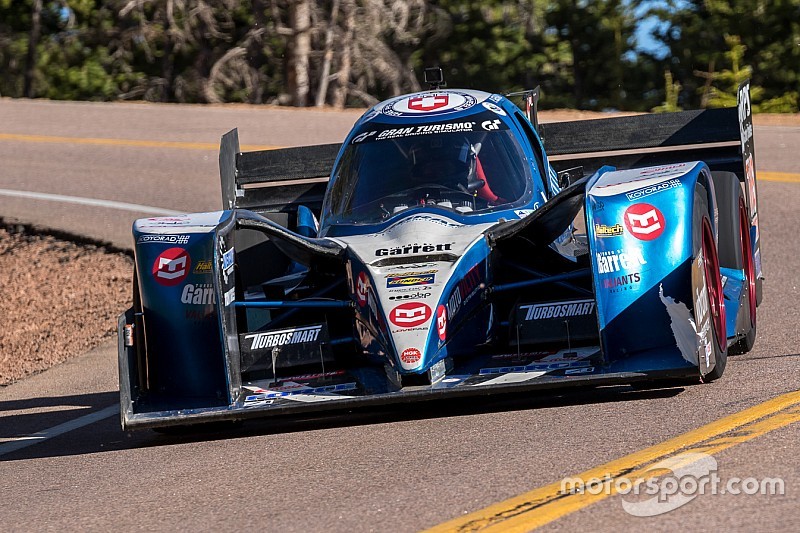 Colorado Springs, CO – After a week of highs and lows, 23-hour work days for the crew and a cancelled practice session due to fog, LoveFab Race Team is pleased to announce the Enviate Hypercar driven by Paul Gerrard finished 2nd in the Unlimited Class in Sunday’s 95th Running of The Broadmoor Pikes Peak International Hill Climb.

After the crew’s tireless efforts on the car, it was the best it had ever been sitting at the start line Sunday, the run started smoothly but unfortunately rising water temperature slowed the pace just after setting the event’s fastest speed of 147mph through the speed traps at the Half Way Picnic Grounds. From there focus shifted from winning to survival, getting to the top for the team. All of the exhausting work would only be justified if the car crossed the finish line. Practically within sight of the finish the mountain threw in another challenge, the Olympic corner hairpin was so tight that it caused the now near terminally over-heated engine to stall.

Our goals for the season have not only been met, but were exceeded.

The hot engine would not turn over quickly enough to fire the engine as the car sat still with the clock mercilessly still ticking. The only remaining option was to quickly put the car in reverse and let off the brake, back the car blindly using the steep downhill pitch to bump start the motor. After successfully getting the car restarted Gerrard was able to cross the finish line with a time of 10:19:312. Redemption, Justification, Celebration… it was all ours now.

Pikes Peak is a racecourse where tires and brakes play a huge factor. Toyo Tires provided the team with a specially designed tire for the road. The Toyo Proxes tires were able to handle everything that was thrown at them with ease, including 3g corners and braking forces coupled with 1.7g acceleration forces. RPS Brakes supplied the team with a set of carbon brakes that had great levels of power coupled with excellent release characteristics not to mention they’re extremely lightweight.

Paul Gerrard: "Can’t thank the LoveFab team enough for the ridiculous work put in over a grueling but ultimately satisfying Pikes Peak Week 2017. The team completely transformed the car in just a few short days by working through the night after each test day. It went from practically un-drivable to practically perfect by race time. It was an absolute honor to play a part in seeing Cody Loveland’s dream of building a car with his own two hands that could go head to head with the best factory teams in the world.

Enviate proved that you don’t need millions of dollars or factory sponsorship to be competitive at Pikes Peak, just pluck, ingenuity and a little (OK a lot of!) help from your friends. I feel with this fantastic result and the knowledge and confidence that comes with it we can take Enviate to a level that it will genuinely be able to challenge the mountain for the overall record in 2018, let the countdown begin!”

Cody Loveland: "The only way the week could have gone better is if the water temps stayed in check, which would have put us in contention with Dumas for the overall. Throughout the week, we transcended the vertical learning curve and could deliver an "optimum drive" for Paul to wheel in anger for race day. The split times throughout practice week consistently dropped, to the point of being within 1.4 seconds of Dumas, and easily top 5 through the entire field. Paul Gerrard is a world class driver, and I think a bit of a best kept secret. His adaptability to the car, and his ability to relay feedback in terms our team can reciprocate to instant results speaks volumes to not only Paul, but the car's adjustability, and our team’s tenacity to get the job done.

The fact we were barely 7 seconds off Dumas pace, as well as setting the fastest speed of 147mph through Halfway Picnic Grounds shows we are off to a GREAT start for 2018. Paul’s first time in the Enviate Hypercar car was June 3rd, barely three weeks ago. Our goals for the season have not only been met, but were exceeded. Having had a slight taste of a legitimate overall victory, 2018 preparations began the evening after the race. We have a solid base, a detailed plan, and believe overall victory in 2018 is possible. Funding is needed to get there, which we are diligently working in securing."