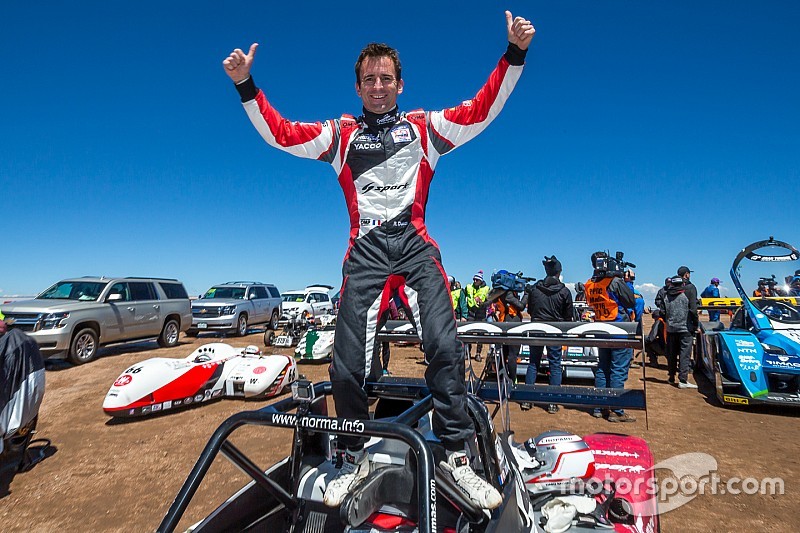 Driving the Norma M20 RD Limited Spec-2016 entered by his own team, the Alès, France driver finish ahead of defending winner Rhys Millen and his electric prototype.

A week after his 24 Hours of Le Mans victory, Romain Dumas took home a historic victory in the legendary Pikes Peak International Hill Climb. In the event’s 100th anniversary, he becomes the first Frenchman to win twice overall, as well as the first driver to take back to back Le Mans/Pikes Peak victories in the same season ! Driving the Norma M20 RD Limited Spec-2016 entered by his own team, the Alès, France driver signed – despite a drilled hose - the second fastest time (8 :51.445) in the history of the event to finish ahead of defending winner Rhys Millen and his electric prototype. Also entered by the Dumas team, Raphaël Astier finished as top rookie, taking second place in the Time Attack 1 category and 10th overall on his debut at the Race to the Clouds !

On Sunday, June 19 at 3pm, Romain Dumas began celebrating a second overall victory in the 24 Hours of Le Mans, the first win with the marque so dear to him, Porsche. It was a success shared with Marc Lieb and Neel Jani behind the wheel of the 919 Hybrid. Following a busy week in Colorado, he took his second win at Pikes Peak. Despite the fastest time set during qualifying on Wednesday, the team was still discovering the potential in the new Norma M20 RD Limited Spec-2016, a four-wheel drive prototype. Following positive practice sessions, the final day was marked by an engine failure, keeping Romain from driving on the top section of the mountain road and forcing the team to burn the midnight oil to rebuild the car. Today, at 11 :10am, Romain was the first "car" competitor to make the run. He established the reference point, a time that would not be beat thanks to three of four best sector times ! At the end of the legendary 20km climb with 156 corners and a summit of over 14,000 feet, he was ahead of the electric prototype of Rhys Millen by 5.673 seconds, and the official Acura concept of Tetsuya Yamano by 14.570 seconds.

"It’s incredible! To win the 24 Hours of Le Mans and Pikes Peak within days, it’s beyond my dreams ! I don’t know if it’s sunk in yet" admits Romain Dumas. "The win was the objective from the word go, but it wasn’t an easy challenge. There were expectations because we had to better our performance from two years ago, and we knew the electric prototypes would be quick and our car was still new. We wanted to show our level of performance. We didn’t quite do that, to be honest, but we had a drilled hose and little brakes issue on the final part. We won anyway and that’s the main thing and I’m very happy."

This team, it’s my pride!

Developed together between the Norbert Santos and Romain Dumas teams, the Norma M20 RD Limited Spec-2016 had completed its first roll out less than a month before the 2016 edition of Pikes Peak. It was then a race against the clock. A race that quickened its pace on Friday following engine troubles. Looking back, the adventure and victory is all the sweeter. "24 hours ago, this win was unimaginable,» explains Romain Dumas. "I have no words to explain the work put in by the team, especially this week and even more so since Friday morning. This team, with the help from Norbert Santos, it’s my pride. The guys didn’t sleep while they were putting the car back together. We really had our backs to the wall but we did it. We could have done better in terms of the time, that’s certain. But this event is so unique. Pikes Peak has a point in common with Le Mans : you never know what to expect and you have to put all the right puzzle pieces together the day of. So when there’s a victory at the end of it all, it’s a huge satisfaction."

Raphaël Astier shines on his debut!

Alongside the prototype in the "Unlimited" class, the Romain Dumas team was running a Porsche 911 GT3 Cup in the "Time Attack 1" category. At 25 years of age, Raphaël Astier was taking part in his very first Pikes Peak. By getting close to the 10 minute mark, (10 :06.006), he shone on his debut, finishing as top rookie by one tenth and second in class, less than six seconds off the winner, and Pikes Peak specialist, David Donner. "Racing at Pikes Peak, only a few weeks ago it was still a dream. Today, it became a reality and I’m thrilled." explains Raphaël Astier. "Overall, the week went well, the team worked hard to go into Sunday’s race in the best possible conditions. I discovered this legendary place while trying to learn as much as possible and enjoy myself. I didn’t want to put too much pressure on myself, but I wanted to show my potential by aiming for a podium finish. That was the case, and in addition there’s the top rookie finisher and a top 10 overall finish. So I’m satisfied. Romain showed me what to do and to do this famous hill climb, was very cool."

"Raphaël had an excellent performance» underlines Romain Dumas, who was acting as both driver and team manager. "Like in 2014 with Vincent Beltoise, the team was helping a young French driver make his debut at Pikes Peak and that’s also something that I like. Raphaël did well in this new experience, who is a rally specialist. He progressed consistently during practice and then put it all together for the race. It wasn’t an easy task, since he was discovering the road and the car. His time is very good, considering his car remained in its original configuration and ran with an atmospheric engine. He showed promise and I hope he’ll have other chances to show his talent because he deserves it. It’s a good result for the team as a whole."

Having also completed the Dakar in January, Romain Dumas’s team will return to competition in the weeks and months to come, thanks to its commitments in modern and historic rallies with Porsches developed and prepared under the RD Limited label.