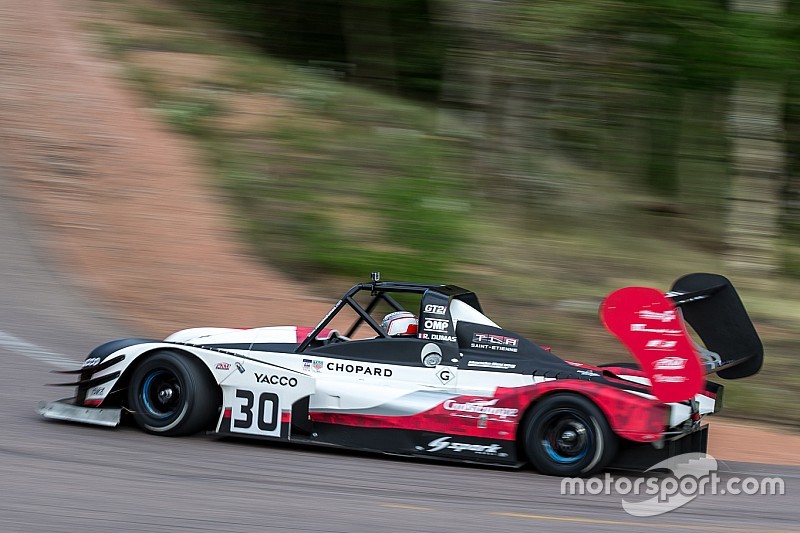 France native driver holds provisional pole for the famous Race to the Clouds, which is celebrating its 100th year.

Following optional practice runs yesterday, Romain Dumas took part in the Pikes Peak International Hill Climb qualifications on Wednesday. As he waits for other top competitors to qualify tomorrow, including those in the Electric class, the Alès, France native holds provisional pole for the famous Race to the Clouds, which is celebrating its 100th year. Driving the Norma M20 RD Limited Spec-2016, he clocked the fastest time of the day both in the Unlimited class and overall.

Less than two days after winning the 24 Hours of Le Mans, Romain Dumas began Pikes Peak race week with a run on the middle section of the mountain road. A good way to get back into things, at more than 3,000 meters, between Glen Cove and Devil’s Playground. During this optional session, the French driver clocked the fastest time in the sector (2:20.12). The day continued with a test at Pueblo Motorsports Park in order to further refine the settings of the Norma M20 RD Limited Spec-2016.

This Wednesday, Romain Dumas qualified for the event on the bottom section of the hill climb, a portion he had not seen in two years. Fastest after all three of his runs, he qualified with a final time of 3:34.552 to take the Unlimited class pole position, and provisional overall pole. The Electric class, which features defending race winner Rhys Millen, will complete qualifying on Thursday alongside the Time Attack 2 and Open Wheel categories. "Our runs over the course of these two days have been generally positive. We’re improving the car step by step" admits Romain Dumas.

" In my previous participations, I had the opportunity to have two runs in the lower section of the mountain road, which is quick and needs a good rhythm. It’s more complicated with only one day of testing on this section. Logically, there’s a bit more to be had, but I hope nonetheless that we’ll maintain our pole. It will be interesting to see how the electric vehicles perform. We need to find the right compromise to be comfortable both in the quick corners as well as hairpins. We made a few adjustments between the two sessions and it’s going in the right direction. The car is handling pretty well and we ‘re faster than in 2014 so that’s a good start. The team is working well together and everyone’s involvement is as important as ever. "